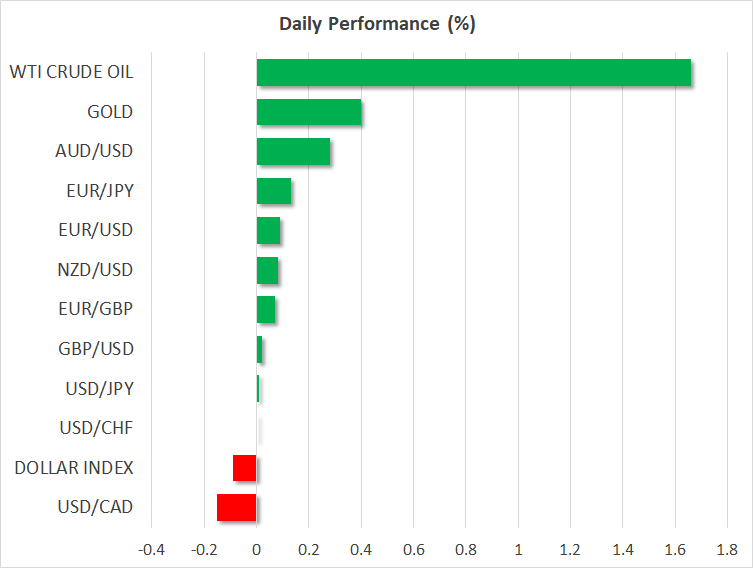 Renewed optimism that US and China can de-escalate tensions

Signs that the US and China were making much-needed progress in their long-running trade dispute lifted market sentiment on Friday, leading to a broad-based risk-on mood. President Trump told reporters the talks are “going really well” before adding “So we had a very, very good negotiation with China”.

Investors were also encouraged by Trump’s confirmation that he will meet with China’s chief negotiator Liu He at the White House at 18:45 GMT – a sign that the US is pleased with the progress being made.

The positive turnaround comes after a tense start to the week following Trump’s surprise decision to add more Chinese government agencies and companies to its trade blacklist and the imposition of visa restrictions on some Chinese officials. But while a substantial agreement is not on the cards and the most this week’s talks are likely to produce is a currency agreement, it would nevertheless represent the first significant de-escalation in trade tensions since May.

It would also potentially involve Trump agreeing to suspend or postpone the planned tariff hike on October 15 on $250 billion worth of Chinese imports, providing markets some reprieve.

The improved risk appetite pressured safe havens, with both the dollar and the yen slipping. The US currency struggled against all majors except for the yen and the Swiss franc. Dollar/yen hovered around the 108 level, while the dollar index steadied at 98.63 after tumbling yesterday.

Soft US producer and consumer prices released this week weighed on the dollar, but its losses were also exacerbated by a surge in the euro and pound. The single currency was boosted on Thursday after the ECB’s meeting minutes and a Financial Times report highlighted the strong divisions within the Bank’s Governing Council, which diminished the likelihood of further policy easing.

The risk-sensitive Australian and New Zealand dollars extended their gains, with the aussie climbing to two-week highs, though the kiwi remained within its recent sideways range. The Canadian dollar was up too, reaching more than one-week highs ahead of Canadian employment numbers due later today.

Stocks in Asia closed around 1% higher, but European and US equity futures pointed to more moderate gains, signalling some caution among investors about the trade talks as previous efforts have not ended well.

The fragility of the current risk-on sentiment was also visible in gold prices, which edged back up to $1500 an ounce today after yesterday’s slide below the key level. Tensions in the Middle East also supported the precious metal as well as oil prices.

Iran said one of its oil tankers in the Red Sea was hit by two missiles, while Turkey continued its offensive in northern Syria against the Kurds.

Oil prices were additionally lifted after OPEC said it is considering cutting production when it meets in December, amid a weaker demand outlook due to the global economic slowdown.

The British pound enjoyed its biggest daily advance since March after it surged more than 2% against the dollar, breaking past the $1.24 level on Thursday, following the much-anticipated meeting between the UK and Irish prime ministers.

After the talks between the UK and the EU came close to collapse earlier in the week, there was a glimmer of hope as Boris Johnson and Leo Varadkar issued a joint statement saying, “We can see a pathway to a possible Brexit deal”. In a further boost for Britain’s beleaguered prime minister, Varadkar said he thought a deal before October 31 was possible.

Not much was revealed about what the two leaders discussed or agreed, which possibly signals there is real movement in the talks now and provides a positive backdrop ahead of the crucial EU summit on October 17-18.