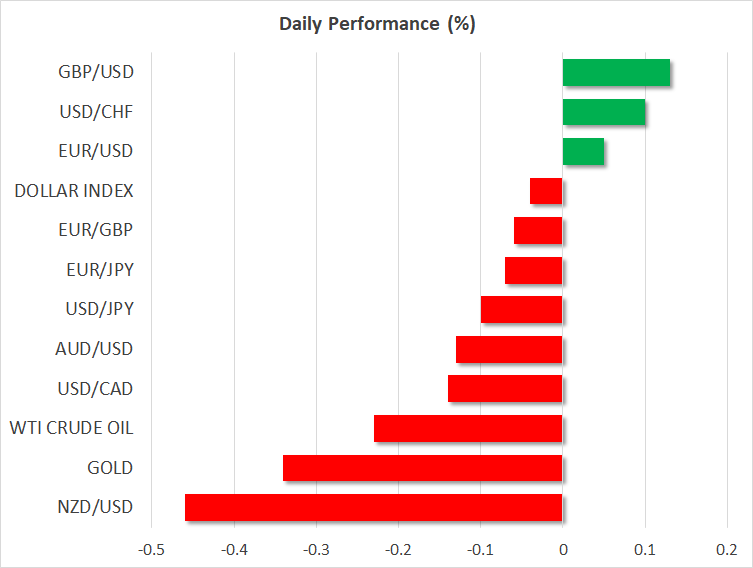 The main story on Friday was that the Trump administration is examining whether to restrict US financial flows into China. According to reports, Washington is considering delisting Chinese companies from US stock exchanges and instructing state pension funds to limit their exposure to Chinese markets, which would effectively spiral the trade war into a financial war.

American stocks closed in the red, the S&P 500 falling 0.53%. Yet, the reaction in the FX market was relatively limited, with defensive plays like the yen and Swiss franc spiking higher, but not dramatically. Investors are a little calmer today, with futures pointing to a higher open on Wall Street after the US Treasury played down such concerns over the weekend, saying it’s not contemplating blocking Chinese firms from listing in the US “at this time”.

To be frank, this looks like a classic Trump ‘power move’ more than anything else, intended to soften Beijing’s negotiating stance ahead of the upcoming talks by making it clear that tariffs are not the only weapon on the table. In the big picture, this is very worrisome. It shows that 1) the US administration will likely continue with its ‘maximum pressure’ approach and 2) that this trade conflict is branching out into the realms of finance and geopolitics, raising questions of whether we are witnessing the start of a new cold war.

For now though, the narrative remains largely intact. Both sides typically play up hopes for a breakthrough before each negotiating round, so the next days may be characterized by a sense of optimism that progress can be made, especially on simple but politically important subjects like agricultural purchases.

Kiwi stays on the floor after disappointing data

The New Zealand dollar can’t catch a break, with the currency dropping to a new 4-year low versus its US counterpart earlier today, after another disappointing business confidence print hit the markets. The ANZ’s monthly business index for September plunged to a low last seen in 2008.

Weak business confidence has plagued New Zealand for over two years now, threatening to become self-fulfilling if firms respond by scaling back investment and hiring. This is among the key reasons that the RBNZ has acted with force in recent months, to stop this negative feedback loop. Hence, the central bank will be very disappointed that its ‘double’ rate cut last month failed to boost confidence even a little.

Other things being equal, this raises the odds of another rate cut in November. Indeed, the implied probability for such an action shot up to ~66% after these data, from roughly a coin flip earlier. Admittedly, the only thing that can stay the RBNZ’s hand at this point would be a substantial de-escalation in the US-China standoff, and since that looks unlikely, more losses for the kiwi shouldn’t be ruled out.

The British pound took a hit on Friday after BoE policymaker Saunders – who typically leans hawkish – said that rates may need to be cut if Brexit uncertainty persists. He added that below-potential growth is reason enough to slash rates, and that the economy doesn’t need to slow any further.

On the Brexit front, headlines today suggest that UK opposition leaders will meet to force PM Johnson to ask for a Brexit extension much earlier. If they successfully change the law and bring forward the date that the PM must ask for an extension, that would also bring forward the timing of a General Election, which may be good news for the pound. 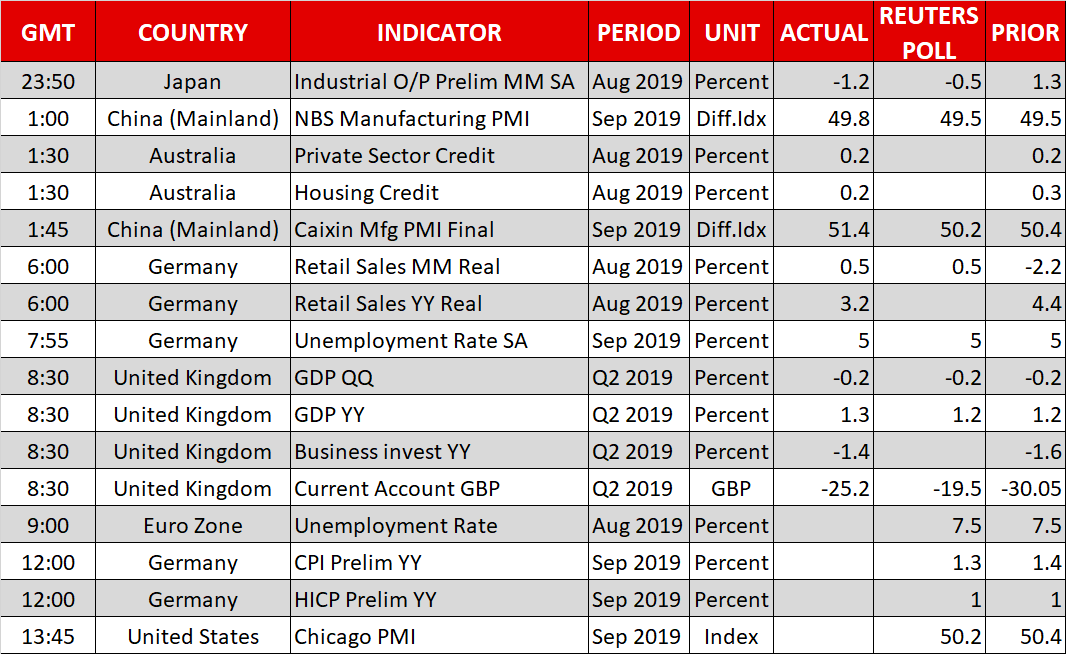