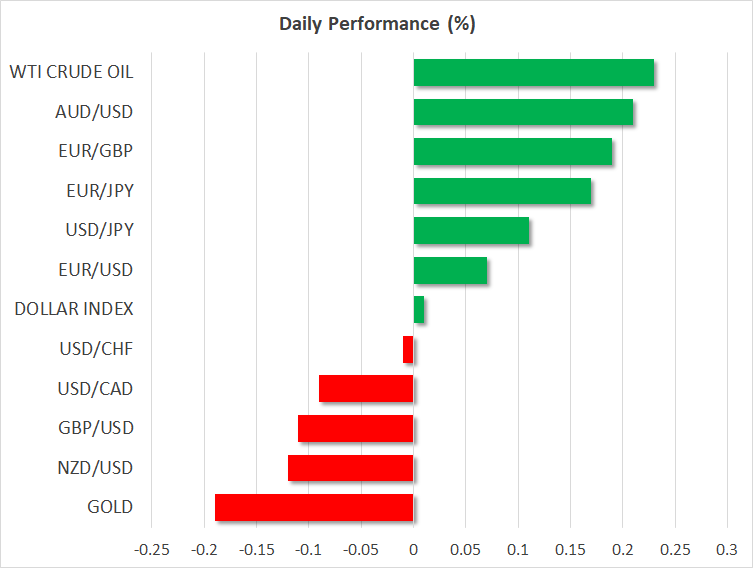 China pumps more stimulus as no sign yet of virus peaking

Asian stocks were boosted on Monday as Chinese authorities intervened to prop up markets with little evidence so far that the coronavirus outbreak is easing. The People’s Bank of China cut its medium-term lending facility by 10 basis points and injected 100 billion yuan via reverse repo operations. There was also help on the fiscal front with China’s finance minister saying that targeted and phased tax cuts were on the way.

The moves lifted China’s main indices more than 2% higher, pulling them above where they were before the plunge that followed when markets reopened after the Lunar New Year holiday. But as stock markets take the virus outbreak in their stride, analysts continued to downgrade their forecasts of Chinese GDP growth as, with each passing day, it’s looking more and more likely that the disruption from the epidemic will last at least through March, having a much bigger impact on first quarter growth than initially feared.

There were 2,048 new cases of coronavirus reported globally on Sunday, slightly higher than the previous day, while there were 105 new deaths. The majority of those were in China’s Hubei province where it’s thought there’s more backlog cases that have yet to be diagnosed. On the positive side, the number of cases outside of Hubei appear to be slowing, providing some cause for optimism.

Traders outside of China were more cautious on Monday, however, as shares elsewhere in Asia were unable to fully recoup their losses. Stocks in Japan were hit hard in particular after the country reported much worse than expected GDP numbers for the fourth quarter of 2019. Japan’s GDP shrunk by a steep 1.6% on a quarterly basis, heightening fears of a technical recession as it’s looking increasingly difficult to see how the economy will be able to avoid another contraction in Q1.

The Nikkei 225 index closed 0.7% lower and the yen was also broadly weaker, though the latter’s moves were mainly driven by the slight risk-on sentiment on the back of China’s new support measures. Markets see little chance of a rate cut by the Bank of Japan in the near term even as Governor Kuroda maintains his pledge of additional stimulus if needed. However, rate cut odds are likely to edge higher if the incoming data from Japan further paint a picture of deteriorating economic conditions.

The US dollar continued to provide a safe bet for both risk-on and risk-off trades as the relatively higher interest rates and strong fundamentals of the US economy set it apart from its peers. Hence, the dollar index crawled to a new 4-month top on Friday and was trading marginally below it today, with the yen a tad softer at 109.84 per dollar and the euro steadier at $1.0847.

US data on Friday spoiled the recent run of upbeat reports. Core retail sales were flat in January while industrial production fell by slightly more than expected. Although the misses were nothing dramatic, they nevertheless raise some concerns about whether the US economy will be able to maintain its strong momentum when growth elsewhere is stagnating. This puts the focus on Friday’s preliminary PMI releases for February, which should shed some light on the initial impact of the coronavirus on global growth.

As for the rest of the day, volumes are expected to be light as US markets are shut for President’s Day. But in the meantime, the positive US futures suggest Wall Street’s winning streak could extend into this week as the earnings season comes to a close.