It’s an action-packed week in the States, with Fed chief Jay Powell testifying before Congress on Tuesday (15:00 GMT) and Wednesday, before CPI inflation and retail sales numbers are released on Thursday and Friday respectively, both at 13:30 GMT. If Powell maintains a relatively sanguine tone, that might come as a ‘hawkish’ surprise for a market that’s pricing in one and a half rate cuts by year-end. Overall, the dollar could continue to reign as ‘king’ of the FX market, as there’s no viable substitute for now.

Even though the American economy has lost some steam in recent months, it’s still doing fine by most metrics – certainly much better than other major economies. In particular, real wage growth has slowed substantially, spelling bad news for future consumption, which has already started to cool. Meanwhile, business investment contracted sharply in Q4 as trade tensions, a weakening global economy, and troubles at Boeing – the largest US aircraft maker – continued to cast a dark shadow.

Yet, the situation is still decent overall. Growth is running at a healthy clip around 2%, the labor market is adding jobs at a solid pace, consumer confidence remains high, the housing market is picking up, and the manufacturing sector finally stopped shrinking according to the latest ISM survey.

On a global level, developments have been mixed as well. Trade worries have taken a back seat following the ‘phase one’ US-China deal but concerns about the coronavirus and its impact on supply chains have likely filled that void.

Amid all this, Fed Chairman Powell will appear before the House Financial Services Committee on Tuesday and then the Senate Banking Committee on Wednesday. Most of the market reaction might come from the subsequent Q&A session, where lawmakers will grill him on the economic outlook. Investors will look for any updates on how concerned the Fed is with the virus outbreak, given the potential spillover effects for the American economy. 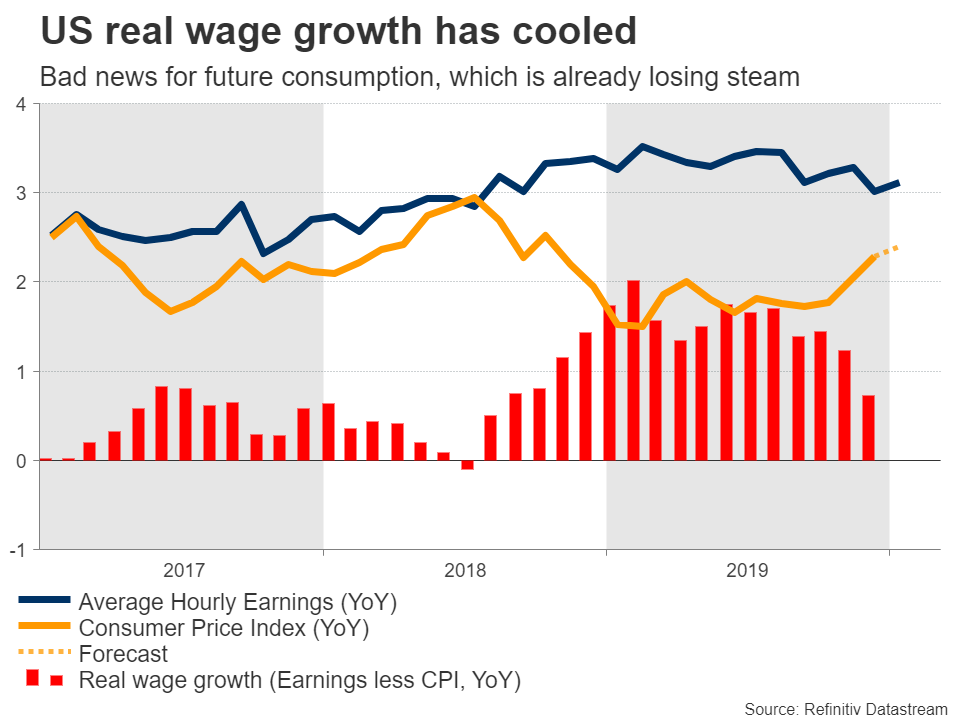 In general, though, it’s doubtful we’ll hear anything new. Powell’s message at the most recent FOMC meeting was that the Fed is happy with where policy is right now, and while new downside risks have emerged, those aren’t significant enough to alter the outlook yet.

He is unlikely to deviate much from this view, and if anything, a relatively sanguine tone could come as a hawkish surprise for traders considering that one and a half rate cuts are already priced in by year-end. If so, that could lift the dollar.

On the numbers front, inflation as measured by the CPI is forecast to clock in at an annual rate of 2.4% in January from 2.3% previously, though the core rate is expected to tick down to 2.2% from 2.3% in December.

Even more important will be the retail sales prints. Consumption has slowed, with the Fed downgrading its assessment of consumption growth to “moderate” from “strong” earlier, so these will be closely watched. On a monthly basis, retail sales are forecast to have risen by 0.3%, the same pace as previously. The core figure is also seen at 0.3%, though that would represent a slowdown after a robust 0.7% in December. Likewise, the retail control group – the number used in GDP calculations – is expected to have slowed to 0.3% in January, from 0.5% previously.

Dollar still the only game in town

As for the dollar, the picture remains positive even after the recent bullish run, for a lack of viable alternatives. The US economy, for all its troubles, is still miles better than the growth-starved economies of Europe and Japan, and consequently the dollar is much more attractive in terms of interest rate differentials.

For the greenback’s strength to abate, either the Fed has to cut rates aggressively or the Eurozone needs to launch a fiscal spending package to boost growth and lift the euro – neither of which seems likely over the coming months.

From a technical perspective as well, there is virtually nothing left to stop euro/dollar from testing its 2019 low at 1.0875 soon. If the bears stay in control and manage to pierce below 1.0875, the next stop might be the 1.0840 region, which halted the drop back in May 2017.

On the upside, in case disappointing data hit the dollar for example, initial resistance might come from the 1.0940 zone. If violated, the focus would turn to 1.0990, ahead of the 1.1040 swing low from early December.