The third quarter was a market disappointment for Jeff Bezos’ e-commerce giant Amazon.com Inc. Despite earnings beating analysts’ estimates at $5.75 per share, company’s revenues missed forecasts, clocking in at $56.6 billion versus $57.10bln expected. its revenue guidance for the fourth quarter was also under consensus of $73.79bln and within the $66.5-$72.5bln range, a signal that the biggest sales holiday period might not be as bright as markets believe.

This brings us to the fourth quarter results due on Thursday January 31 after the markets close. According to Reuters analysts, quarterly revenues are projected to arrive at $71.8bln, marking an increase of 18.5% relative to the same period a year ago. While any growth is good news, someone would get discouraged when comparing this to the previous gains of 29% (Q3), 39% (Q2) and 41% (Q1).  Regarding annual revenues, these are anticipated to climb by 31% year-on-year to reach the amount of $232.37bln, marking approximately the same percentage growth as in 2017. Earnings per share would attract a special attention as well, as forecasts suggest a small pullback to $5.66, with the most optimistic analysts setting their estimate at $4.37 and the most pessimistic analysts at $8.27.

But given the forward-looking character of stock markets, the new guidance will likely be the catalyst behind any market movement. In order to keep investors on the bullish side, Amazon should express confidence about its performance in Q1 2019. Still, with the competition in the retail industry rising high and government regulation scrutiny turning more intense both inside and outside the US, the company could once again choose to share a more cautious outlook. Having said that, Amazon’s service simplicity and progressive mindset to execute customers’ orders through convenient innovative tools such as the “Alexa” virtual assistant and the more recent robot delivery system, will probably hold the firm on top of the sector’s ranking list.

In Wall Street, the S&P 500’s second largest company by market capitalization just after Microsoft, managed to climb this month after upsetting Q3 earnings numbers in combination with a broad stock sell-off, which pushed the firm’s share price to 11-month lows. The stock is up by 20% over the past 52 weeks compared to a 7.7% overall loss in the S&P 500 index, while in January the price is trading up by 9.2% so far versus the 6.7% expansion achieved on average in the S&P 500 family.

Should Amazon surprise markets to the upside, its share price could surge to retest the 200-day simple moving average currently at 1,714. A successful break above that line could see another barrier around 1,770 before attention turns to the 1,850 restrictive area.

In the negative scenario, if the outcome drops below expectations, with executives adopting a more cautious approach for 2019, then the price could weaken towards the 50-day MA currently at 1,595. Below that, the bears may pause around the 1,500 psychological level, while lower the next stop could be near the 1,440 mark. 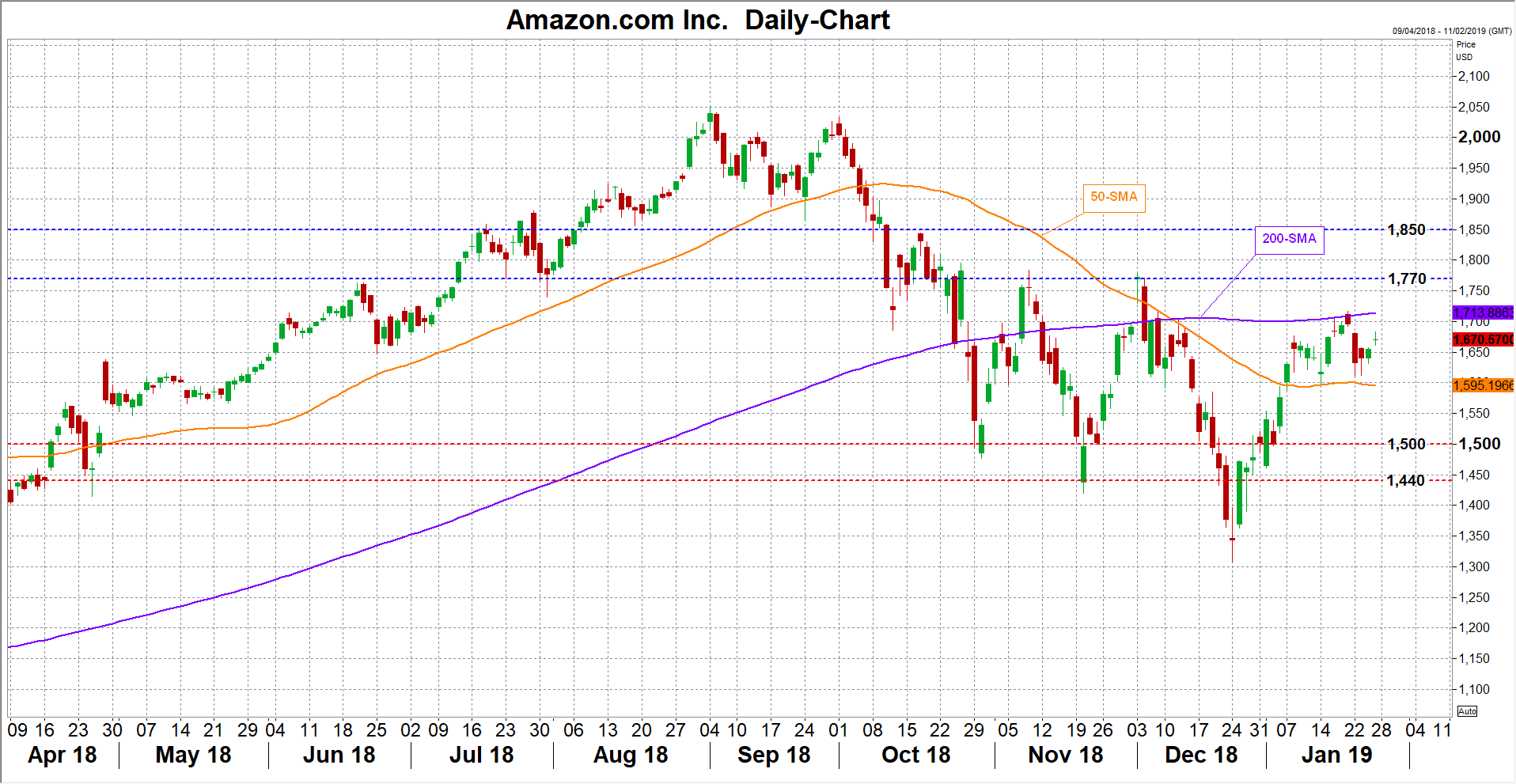 Ebay, one of the lasting success stories of the dot-com bubble era, which currently holds the ninth place among the largest internet companies by revenue, had a positive start in 2019 as well, with its stock price jumping from 2 ½-year lows in the end of December to 3 ½-month highs. But the climate within the company is not as rosy as it seems, as the recent letter issued by the shareholder Elliot Management Corporation, the biggest activist fund worldwide, reminded markets that there are still allegations of mismanagement around its product and marketing decisions. After separating from the fast-growing PayPal in 2015, Elliot believes that a split from the ticket-selling business Stubhub acquired in 2007 and a separation from a portfolio of Classified properties would add market value to the company and increase capital returns, sending the share price up to $55-$63 by 2020. The aforementioned units are worth more outside Ebay according to the activist shareholder and a separation from these assets would limit wasteful spending and enhance company efficiency at a time when competitors such as Walmart are trying to steal market share in the industry. Recall that after April’s upgrade, Morgan Stanley decided to downgrade its rating for Ebay’ shares in December from overweight to equal-weight due to a slower-than-expected growth in gross merchandise volume. Walmart on the other hand was upgraded from equal-weight to overweight.

The activist investor’s letter arrived just before the financial results for the fourth quarter and investors will be closely monitoring the data to see if Elliot’s message should be taken more seriously in case the company misses expectations. The report released after the market close on Tuesday January 29, is expected to display earnings of $0.68 per share in the three months to December, slightly higher than the $0.67 price in the previous quarter. The highest estimate stands at $0.69 and the lowest at $0.61. Revenues are forecast to climb from $2.65bln in Q3 to $2.86bln, with Ebay itself estimating revenues higher by 4-5% at $2.85-$2.89. For the full year the amount is said to climb to $10.73 from $9.56 in 2017, marking a growth of 12% versus 6.5% in 2017.

Turning to Wall Street, better-than-projected quarterly results and/or a positive forward guidance could put worries aside for now, helping the stock price to hit the 200-day MA currently at 33.85. Another leg higher may meet resistance between 35.30 and 36.65. If the latter fails to hold, the way could open towards the 38 level.

On the flipside, weaker prints may drive the market down to the previous low of 32.33, while the 31 peak on January 18 could gather interest as well. Falling even lower, the bears may take a break somewhere between 30- and the 50-day MA at 29.25. 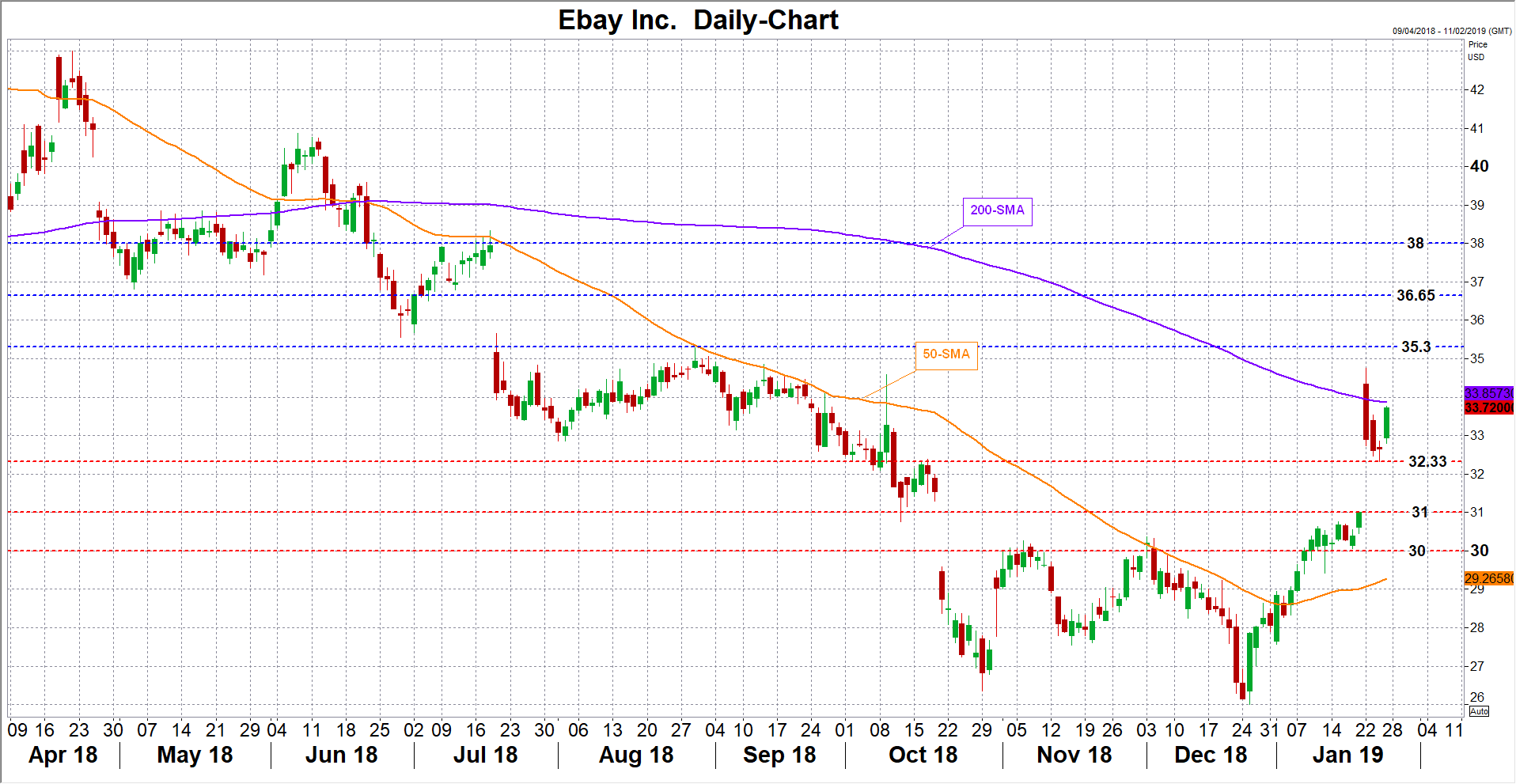