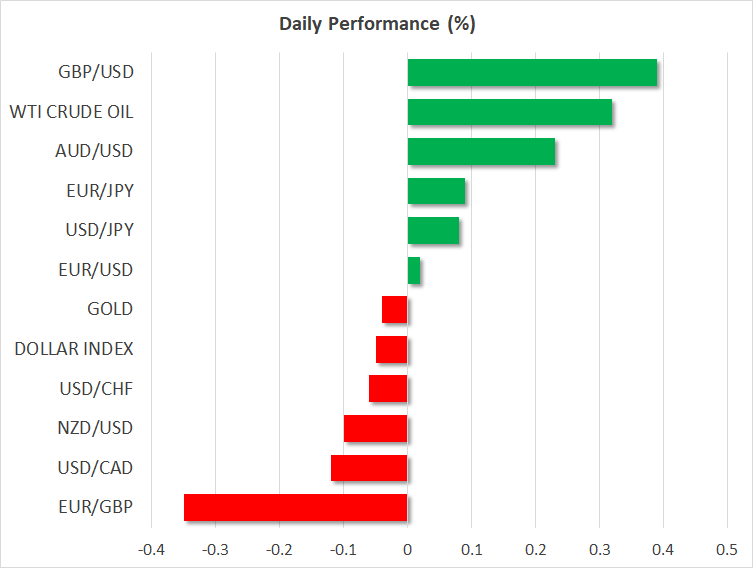 The British pound rebounded overnight, gaining 0.4% versus the dollar, following a media report suggesting the UK government has agreed on a fallback position as a last-ditch effort to avoid a “hard” Irish border. The UK is prepared to remain in the EU customs union beyond 2021 to ensure frictionless trade on the Irish border. This has been one of the main issues that have been hindering progress in the Brexit negotiations and hence, signals that the worse case scenario of a hard border may be avoided likely reignited speculation the talks may finally move forward.

With little in the way of UK data releases until next week, pound crosses may continue to be driven by updates on the Brexit front. Any fresh signs that the UK administration is willing to make some concessions for the talks to progress may provide some much-needed support to the pound, which is still licking its wounds following the BoE’s cautious stance last week.

In euro land, the common currency remained under selling pressure yesterday amid reports that an incoming anti-establishment coalition government in Italy would seek to write-off as much as €250 billion of Italian debt. This sent shivers through the Italian debt market, triggering a flight out of Italian bonds and pressuring the euro. That said, these reports were subsequently denied by one of the two political parties, helping the euro to recover some of its losses.

Over in the US, the dollar index stalled yesterday, ending the day only marginally higher even though the yields on 10-year US Treasuries continued to climb, reaching a fresh seven-year high of 3.12% today. The continued advance in US bond yields has been one of the major factors supporting the greenback lately.

In Canada, the loonie surged following some comments from the nation’s Finance Minister Bill Morneau. He stoked expectations that a severely-delayed oil pipeline may be completed sooner rather than later, making it easier to export Canadian oil.

Thursday’s calendar doesn’t feature much in terms of releases to get traders excited. In the absence of important data, the attention is expected to fall on developments revolving around Brexit and Italian politics.

At 1230 GMT, weekly jobless claims data will be made public out of the US, while the Philly Fed Business index pertaining to the month of May will also be hitting the markets at the same time.

A report by the Telegraph saying that Britain will tell Brussels it is prepared to stay in the EU’s customs union beyond 2021 boosted sterling. In this respect, a meeting between UK PM Theresa May and European Council President Donald Tusk taking place today will be of interest.

The euro is coming under pressure on the back of Italian political uncertainty and the implications an anti-establishment government by the 5-Star Movement and (Northern) League parties will have for the euro area. The story will be closely watched as it is expected to be the major driver in euro pairs, at least in the short term.

Retail giant Walmart will be releasing its quarterly results before today’s opening bell on Wall Street. The direction in Treasury yields will also be eyed as it has implications for equity markets; higher yields render bonds relatively more attractive compared to stocks.

Outgoing ECB Vice President Vitor Constancio will be delivering the opening address at the third annual ECB macroprudential policy and research conference at 1200 GMT – Cleveland Fed President Loretta Mester will be speaking on monetary policy at the same venue. Regional Fed Presidents Neel Kashkari and Robert Kaplan will also be making appearances at 1445 GMT and 1730 GMT respectively; neither holds voting rights within the FOMC in 2018.

Another meeting that could generate attention on Thursday is the one between US President Donald Trump and NATO Secretary General Jens Stoltenberg, while one should also keep in mind that US-China trade talks and deliberations for a North Korea-US summit remain on the background. 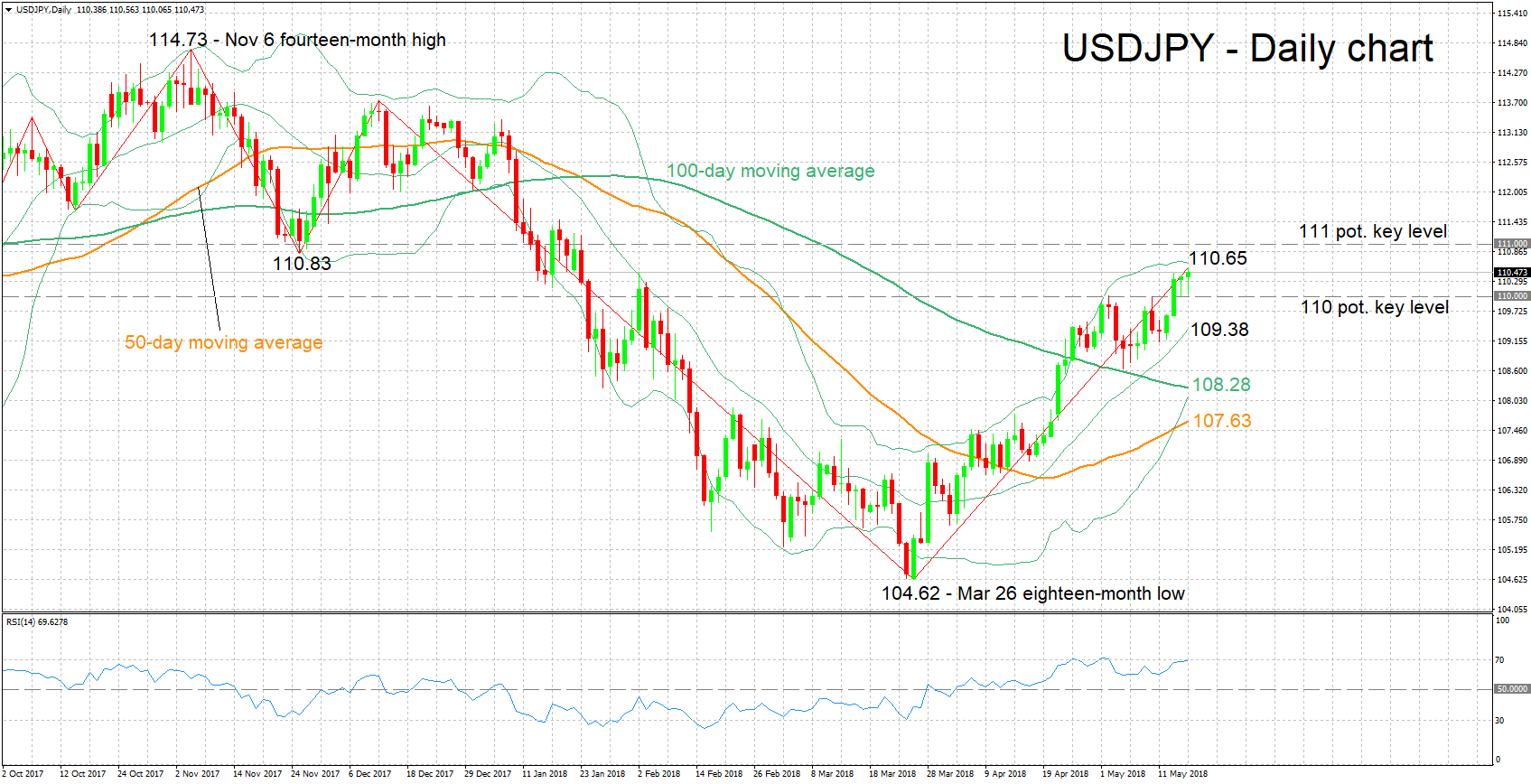 USDJPY has advanced considerably after touching an 18-month low of 104.62 in late March. Earlier on Thursday, it reached a four-month high of 110.56. The rising RSI is serving as a testament to the bullish short-term momentum that is in place. Notice though as well that the indicator is close to the 70 overbought level.

Should the US-Japanese yield differential continue to climb in the US’ favor, then the pair is likely to add to gains. The upper Bollinger band at 110.65 may be offering immediate resistance, with the 111 round figure being eyed next in case of stronger gains.

On the downside and in case of falling US Treasury yields, USDJPY may ease a bit. Support to declines may come around the 110 handle, and further below from the middle Bollinger line – a 20-day moving average line – at 109.38.

Although today’s US releases are not typically major market movers, the pair may still some positioning upon the release of the numbers.