European Open Preview – Pound slumps as May expected to step down; dollar lifted by strong data and earnings 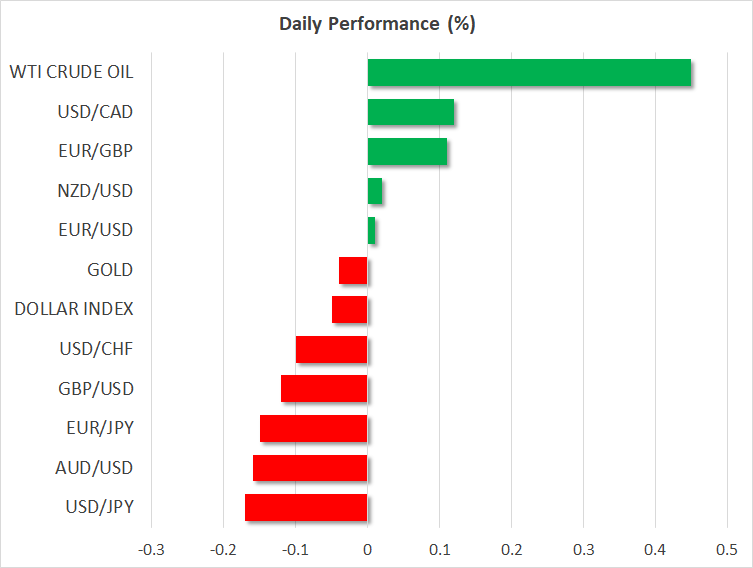 Sterling is on track to post its sixth straight day of losses and to end the week 1.6% lower as Prime Minister Theresa May’s days look numbered. It was confirmed yesterday that May will set her departure date after her Brexit deal is put to a fourth and final vote in the first week of June. May has promised to quit regardless of whether MPs approve or reject her deal, meaning a summer leadership contest is almost certain.

But while this ends speculation about May’s premiership, it opens the possibility of a hardliner taking over and delivering a ‘hard’ Brexit. Former foreign minister Boris Johnson – a Brexiteer – has already said he will run for the Tory leadership. Making matters worse for investors, May’s planned departure renders the cross-party talks redundant as Labour would see no point in reaching an agreement with a leader who is about to be replaced.

The latest reports suggest an announcement that the talks have ended without agreement is imminent. However, it’s possible the two sides may agree on a process to hold indicative votes in Parliament, which could yet lead to MPs voting in favour of holding a second referendum.

This prospect was of little comfort to the pound, however, as the British currency tumbled to 3-month lows against both the dollar and the euro, dropping below $1.27. With little chance of May’s deal being passed, sterling is unlikely to find much upside until the Conservatives have elected a new leader.

The euro is also set the end the week down against the dollar as heightened trade tensions and fresh concerns about Italy have pulled the single currency to a 10-day low near $1.1175. Italy’s deputy prime minister, Matteo Salvini, is raising eyebrows in Brussels once again as he attacks the EU’s fiscal rules.

While Salvini’s comments are likely motivated by campaigning for the European Parliament elections, due to be held between 23-26 May, this nevertheless raises the prospect of further clashes between Brussels and Rome later this year, especially as lacklustre growth means Italy will struggle to meet its budget deficit target for 2019.

There was little sign of tensions between the US and China easing anytime soon following President Trump’s decision to impose punitive sanctions on Chinese telecom giant, Huawei. Trump’s latest move in the year-long trade dispute has clearly angered the Chinese with officials accusing the US of not being sincere. But more significantly, the indications are that China does not see any point of holding fresh trade talks given the current US stance.

This throws the trade negotiations into a new phase of uncertainty and stocks in China ended around 2.5% lower on Friday as hopes faded of a quick resolution. However, some investors decided to put aside the trade concerns for now and stocks in Japan and Australia were bolstered by Wall Street’s upbeat tone. US stocks closed sharply higher overnight, lifted by strong corporate earnings and surprisingly strong housing and manufacturing data out of the US. The focus later today will fall on the University of Michigan’s consumer sentiment index.

The positive sentiment wasn’t confined to just equities as government bond prices came under pressure, driving up yields. US Treasury yields jumped higher after Fed speakers signalled the Fed might let inflation run above target for a while if it were to rise. Subsequently, the dollar remained well supported on Friday, holding close to the 110-yen level.

Not as fortunate was the Australian dollar, which slid to fresh 4½-month lows. Rising expectations that the RBA could cut rates as early as its June meeting, as well as caution ahead of this weekend’s federal elections in Australia weighed on the aussie.