The loonie has traded sideways lately, as support from a rally in oil prices was offset by growing speculation for rate cuts by the Bank of Canada (BoC). In this context, the inflation data due on Wednesday and the retail sales figures on Thursday could be pivotal for the currency. Overall, downside risks have intensified, so the BoC could strike a more cautious tone when it meets again next week.

The Canadian currency has been consolidating in recent weeks, trading in a narrow range against its US counterpart, even despite continued gains in oil prices. Canada is a major producer and exporter of oil, so its currency typically benefits from increases in crude prices.

While the loonie has advanced in 2019, its 1.7% gain versus the US dollar year-to-date seems miniscule in comparison to the 38% rise in WTI crude oil prices over the same period. Moreover, the correlation between the two has been declining lately, although it remains fairly significant.

The loonie’s inability to rally more convincingly is owed to monetary policy. The Canadian economy is going through a soft patch, with wage growth slowing down and house prices declining – a toxic cocktail for home-owning consumers. Hence, markets think the BoC could start easing its policy again soon, with the implied probability for a quarter-point rate cut by December now resting at ~35%. The rising likelihood for cuts is pushing down on Canada’s long-term interest rates, reducing the loonie’s appeal. Against this backdrop, the upcoming inflation and retail sales data may prove crucial. 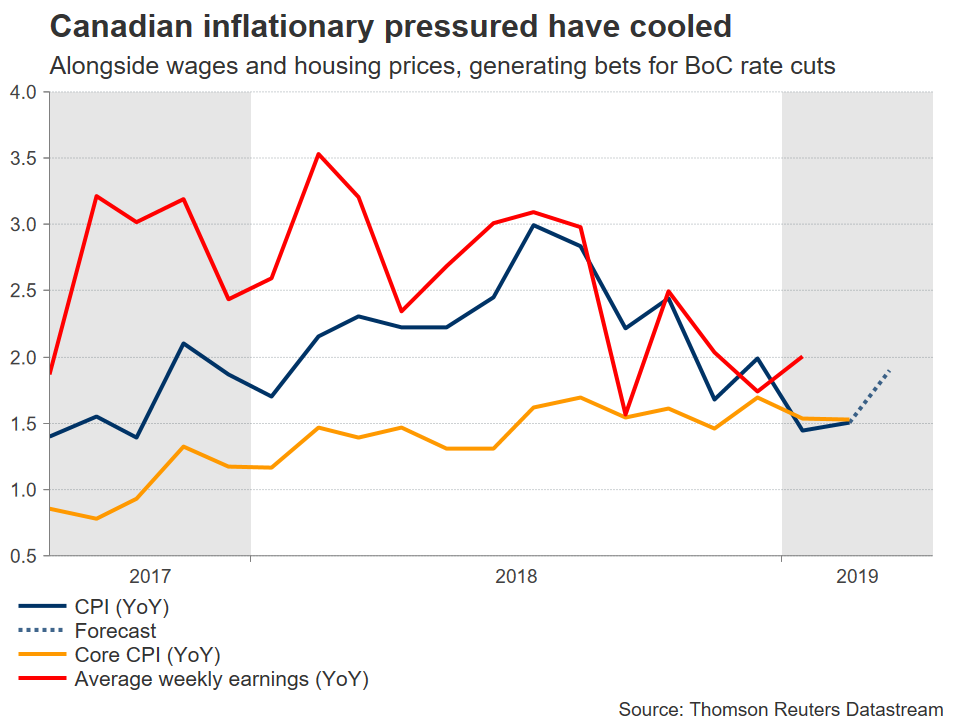 The nation’s headline CPI rate is forecast to have risen to 1.9% on a yearly basis in March, from 1.5% previously. Underlying inflation measures – core, trimmed mean, and weighted CPIs – are also due out, though no forecast is available for any of these. Meanwhile, retail sales are expected to have risen in February, with the monthly rate projected at 0.4%, a rebound following a 0.3% decline earlier. The ‘core’ metric that excludes automobile sales is anticipated to have picked up speed to 0.2%, from 0.1% in January.

If the actual figures meet or beat the forecasts, that would likely dampen expectations for rate cuts, and thus boost the loonie. Looking at dollar/loonie technically, initial support to declines may be found near 1.3290, an area that halted several bearish moves lately. A downside break could see sellers challenge the March lows at 1.3245.

On the flipside, weaker-than-expected data could weigh on the currency. Resistance to advances may come at 1.3450, the March 28 peak, with an upside break opening the door for a test of 1.3560 – a zone marked by the inside swing low in late December.

In the bigger picture, the outlook for the loonie doesn’t seem particularly bright. Oil prices have already come a long way from their lows, implying that the rally may be exhausted. Meanwhile, the domestic economy is losing steam, Canadian companies are turning pessimistic as highlighted by the BoC’s own business survey for Q1, and the global trade picture remains grim. As such, it wouldn’t be a surprise to see the central bank strike a more cautious tone when it meets again next week.