The Canadian dollar has underperformed other G10 commodity currencies lately, eating the dust of the aussie and the kiwi since markets bottomed in March, despite a powerful rally in oil prices. This might reflect uncertainties emanating from the US, which Canada’s economy is highly exposed to, and the threat of new tariffs. The upcoming jobs data at 12:30 GMT Friday could finally bring some good news, though the loonie’s broader direction in the coming weeks will depend mostly on risk appetite.

The one commodity currency that hasn’t capitalized as much on the massive improvement in risk sentiment in recent months, has been the loonie. The Canadian currency has strengthened of course, with some help from soaring oil prices too, but its gains have been much smaller compared to those of the aussie or kiwi.

One might argue that both Australia and New Zealand handled the health crisis itself better than most countries, which justifies their currencies appreciating more. The counterargument is that the RBNZ is also threatening to cut interest rates to negative, while the Bank of Canada isn’t, balancing this equation out.

Indeed, much of the loonie’s underperformance likely comes down to concerns around the US economy. Roughly three-quarters of all Canadian exports are destined for the US market, so the loonie’s fortunes are inexorably tied to the American economy, which is currently struggling with a resurgence in virus cases that might derail the recovery. 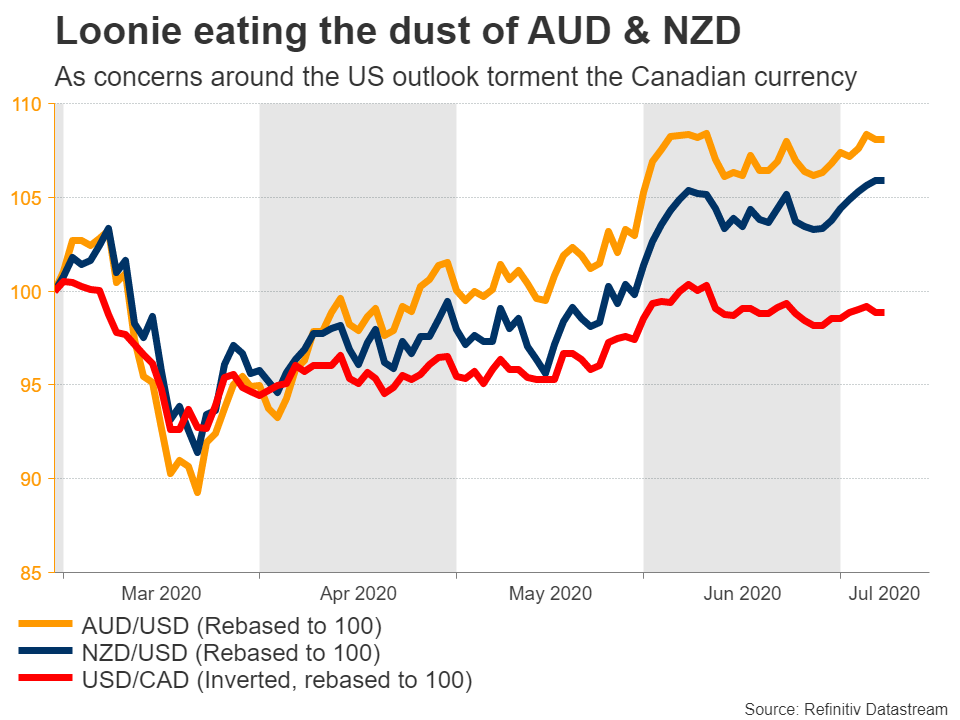 Some recent reports that the White House is considering new tariffs on Canadian aluminum exports – despite the trade deal between the two countries – might also be keeping the loonie down.

But better times may lie ahead, as the nation’s employment numbers for June will hit the markets on Friday, and the loonie might finally receive a fundamental boost. The Canadian economy is expected to have added 700k jobs as businesses reopened, which would push the unemployment rate down to 12% from 13.7% in May.

Such figures would be good news by themselves, yet judging from the encouraging American jobs data for the same month, there’s even some scope for positive surprises.

In the short term, much of the loonie’s direction will hinge on global risk appetite, and specifically, on how quickly US virus cases rise from here. Admittedly, the next few weeks look difficult, as July US data that will capture the effects of reclosures in California, Texas, and Florida could dampen risk sentiment, alongside a potentially disastrous earnings season.

Longer term though, once the American virus situation is brought back under control, the stage seems set for a powerful rally in the loonie. The fact that the currency has underperformed thus far implies that it has greater scope to strengthen further out, something also supported by CFTC positioning data, which show that large speculators are still net short.

This implies that if sentiment improves, there’s potential for a ‘short squeeze’ that catapults the loonie higher as several negative bets are covered or closed entirely.

Taking a technical look at dollar/loonie, initial support to declines may be found near the 1.3510 zone, which also encompasses the 200-day simple moving average at 1.3496. A break lower would shift the focus to 1.3310.

On the upside, a move above the downtrend line drawn from the March peak could encounter resistance near the crossroads of the 1.3715 region and the 50-day SMA, currently at 1.3740. If violated, the next target for the bulls might be the 1.3850 hurdle.