It’s going to be a busy week in America, with the latest CPI inflation figures hitting the markets at 13:30 GMT on Wednesday, before retail sales data are released on Friday. Two separate testimonies by Fed chief Jay Powell before Congress on Wednesday (16:00 GMT) and Thursday (15:00 GMT) are bound to attract attention too, even if he is unlikely to say anything new. As for the dollar, the near-term outlook remains favorable, particularly against the stricken euro.

The US economy has clearly lost momentum this year as trade uncertainties took their toll on business investment, and the boost from the 2018 tax cuts started to fade. Yet, the slowdown has been relatively moderate so far and contained to specific sectors like manufacturing – it hasn’t spread enough to impact the US consumer, and therefore the broader economy.

Against this backdrop, the Fed cut interest rates three times to prevent a sharper slowdown, but signaled in October that it will hit ‘pause’ for a while and allow that stimulus some time to work before it considers whether and when to act again. Clearly, much of that has to do with the ceasefire in the trade war, which has calmed financial markets.

The Fed chief is unlikely to deviate much from this message when he is grilled by lawmakers. He could reinforce the notion that the Fed is comfortable with the current policy rate, while also maintaining the readiness to act again if the data pulse weakens further. This was his message at the FOMC meeting two weeks ago, and nothing significant has changed since. 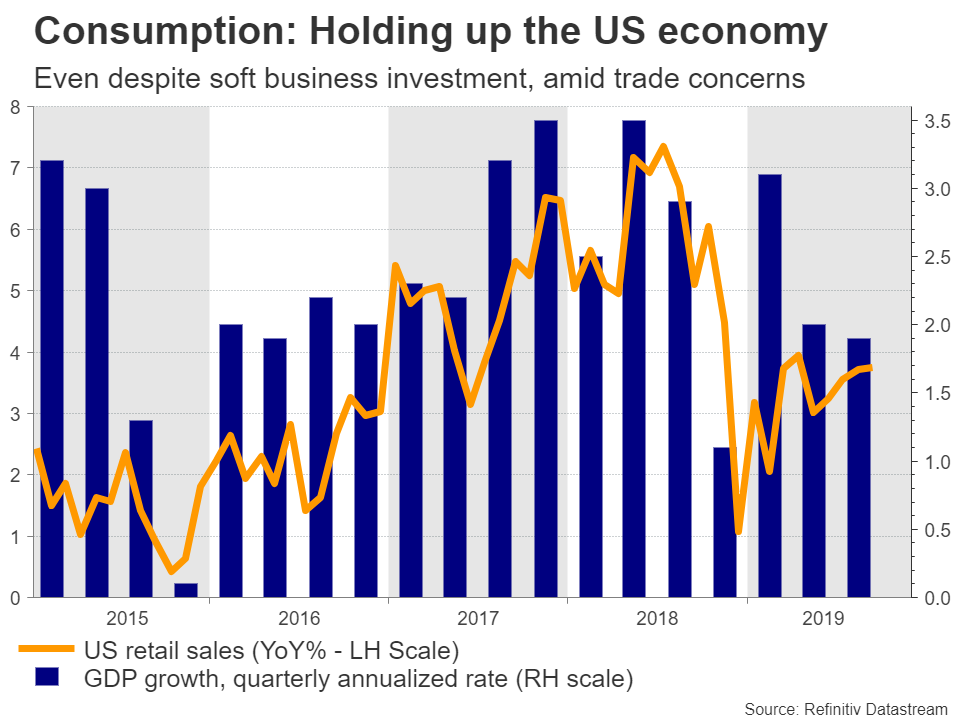 The dollar may gain a little if he manages to hammer home the point that the Fed is firmly on hold, but any upside may be relatively limited as that is the market’s baseline scenario already. Investors currently assign virtually no chance for another move in December, and only a one-in-three chance for a cut by March.

Keep an eye on retail sales

Alongside the trade war, the other key determinant for whether and when rates are slashed next will be incoming data. In that sense, the week kicks into high gear on Wednesday, when CPI inflation numbers for October are released. Forecasts point to both the headline and core CPI rates staying unchanged at 1.7% and 2.4% respectively on a yearly basis.

Even more important will be the retail sales report on Friday, as consumption has been the main pillar holding up US growth lately. The consensus is for both the headline and the core rate to have risen in monthly terms, rebounding from a surprise decline in September.

Turning to the markets, the near-term outlook for the dollar remains favorable, due to a lack of viable alternatives. For all its troubles, the American economy is still much stronger than practically all its major peers, especially Europe. Likewise, US rates are – and will likely remain – much higher than those in Europe or Japan, where interest rates are not only negative in the short run but also artificially low at the longer end, owing to persistent QE.

The bottom line is that the dollar’s strength is unlikely to abate anytime soon. For that to change, either the Fed would need to start slashing rates much more aggressively, or Germany would have to announce a substantial fiscal stimulus package to stimulate the euro area – neither of which seems likely in the coming months.

Taking a technical look at euro/dollar, immediate support to further declines may come from the 1.0990 area, where a downside break could open the door for the 1.0940 region.

If the bulls retake the reins, their first target could be 1.1070, the inside swing low on October 25, before the 1.1180 zone attracts attention.