With the G20 meeting looming large at the end of June and the trade war dust still far from settled, the Chinese calendar will attract extra attention than usual this week. On Wednesday at 0230 GMT, consumer and producer price indices will report on inflation, while on Friday at 0800 GMT, retail sales, industrial production and fixed investment will deliver further evidence on how the second quarter is shaping up. The data, though, may not be good enough to ease growth woes.

Although inflation is not a big issue in China, consumer prices seem to be rising at a sensitive time, when authorities are searching for tools to stabilize demand amid concerns the trade war could turn more costly in the coming months. The deadly African swine fever may have likely disrupted pork supply for another month, pushing the consumer price index (CPI) to 2.7% y/y in May from 2.5% in April despite the pullback in oil prices. On the other hand, prices of goods sold by manufacturers have likely eased thanks to the slowdown in metals and energy, sending the producer price index (PPI) down to 0.6% y/y from 0.9% previously. 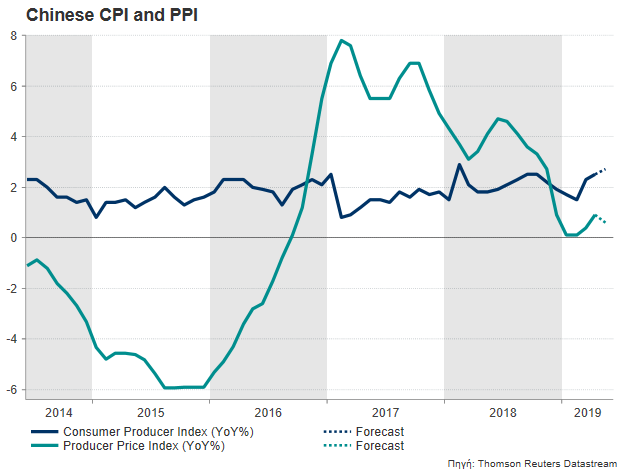 Retail sales on Friday could prove that consumer spending kept rising at a steeper rate of 8.1% y/y compared to 7.2% in the previous month, but this will still be among the slowest rates of increase since 2003 and a signal for additional monetary or/and fiscal stimulus should external risks heighten. Adding to the worries, were also this week’s import figures, which tumbled the most since July 2016, underscoring weakness in the domestic economy.

On the supply side, the news may do little to keep the bad vibes away. Analysts believe the industrial output expanded slightly faster at 5.5% y/y versus 5.4% in April, while expansion in the year-to-date private sector investment, an important engine of growth, steadied at 6.1% and not far above the historic low of 5.3% reached in September. 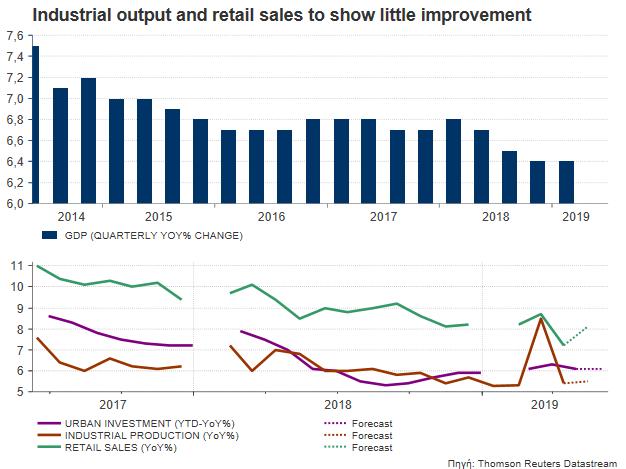 With manufacturers front-loading shipments to avoid any potential turbulence from higher US import tariffs and the discount in the offshore yuan supporting foreign demand for Chinese goods, the surprise rise in exports in May was somewhat justified. Nevertheless, it seems that the upside in export data may not hold for long if the tit-for-tat tariff game stretches further, as it forces production out of China as the US Treasury Secretary Steven Mnuchin claimed.

Such a scenario is currently looking possible in the near term, since Beijing in contrast to Washington, showed little communication so far of how to get trade talks back on track. Moreover, with two weeks left for the G20 gathering in Osaka, the Chinese government has yet to confirm a meeting between Xi Jinping and Trump despite Trump’s threats of imposing levies on $300 billion additional Chinese products if Xi refuses to show up. Even if a potential meeting could promise little or no progress at all, the choice of not attending may have an immediate negative consequence for Beijing.

Turning back to data and the market reaction, disappointing readings – especially on the industrial front – would further dampen hopes for a growth turnaround in the second quarter. Besides the yuan, the Australian dollar could also feel some pain in the wake of lower-than-expected figures as China is a major buyer of Australian products. Particularly, AUDUSD could retreat until the 0.6935 former resistance area, while a bigger negative surprise may also open the door for the 0.6910 mark.