Most important US jobless claims ever? – Forex News Preview

In the United States, all eyes will be on the weekly jobless claims, which will be released at 12:30 GMT on Thursday. This will reveal how much damage the virus outbreak has already inflicted on the US economy, and investors are terrified that the number of Americans filing for unemployment benefits is about to skyrocket as consumption collapses and businesses lay people off. A huge surge in jobless claims could cement fears of a recession and therefore spell more trouble for stock markets, though the rampaging dollar may not be affected much.

Worst yet to come

The panic that has gripped financial markets is unlikely to subside this week, and if anything, the upcoming data could pour more gasoline on the fire. All this time, investors had been ‘flying blind’ as they were merely guessing how big the virus impact would be – but this changes on Thursday. The weekly numbers of Americans filing for unemployment benefits will give markets a taste of just how big the damage is getting.

And it’s likely to be enormous. Forecasts suggest that initial jobless claims will shoot up to 1 million, from 281k last week. If met, this would be the highest print ever, far exceeding the previous record of 695k from back in 1982.

In fact, the risks seem tilted towards an even bigger surge than what’s expected. Preliminary data from some US states that have reported their own claims already point to a much larger nationwide increase. Take Ohio for example – a state with less than 12 million in population – reported roughly 140k jobless claims for the week in question, a 28-fold increase from the previous week. 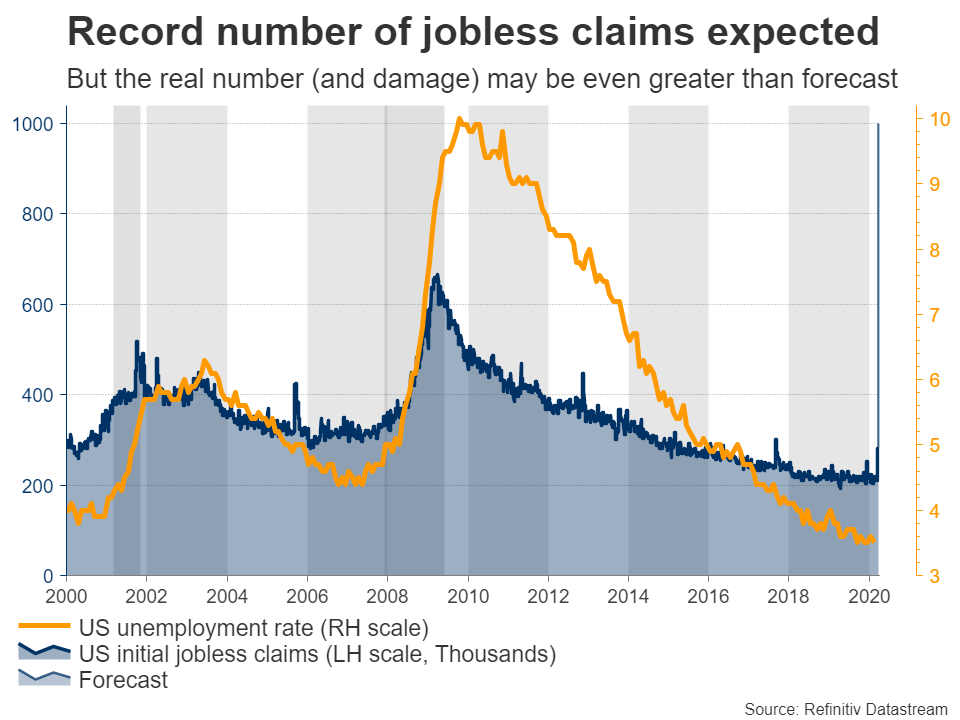 Similar increases have been reported in other states. The most worrisome part is that several states saw their employment websites crash due to a surge in traffic, so the real number of benefit seekers may be even higher than what’s been reported so far.

More bad news for stocks, but dollar may not care

In the financial markets, a much bigger than expected increase in jobless claims would signal that the unemployment rate is set to skyrocket when the nationwide jobs data are released next week. That would probably cement fears for a deep recession – where the collapse in consumption due to lockdowns cascades into a broader crisis as people are left unemployed – and by extension, spell more pain for stock markets.

For the dollar though, it could be a different story. While disappointing economic data typically hurt a nation’s currency, any negative effect might be minor this time. The greenback roared higher in recent weeks as distressed companies and funds globally scrambled to secure dollars to meet their day-to-day operations, hedge positions, or cover margin calls. The result was a staggering dollar shortage, despite the Fed’s best efforts to weaken the currency.

The bottom line is that if the Fed’s overwhelming actions couldn’t really push the dollar down, economic data are unlikely to achieve that either, and flows could continue to overshadow everything else for the time being. In other words, in this panicky environment, even worrisome data may not be enough to keep the dollar down for long.

Taking a technical look at euro/dollar, a disappointing set of jobless claims could see the pair climb for another test of the 1.0830 zone, where an upside break could open the door for a revisit of the 1.0990 area.

On the flipside, if the dollar shortage continues, euro/dollar could edge lower towards the recent lows of 1.0635, where a downside violation would turn the focus initially to the April 2017 low of 1.0570. If that fails to hold too, the next stop might be March 2017 low of 1.0490.