The latest US employment data will hit the markets at 13:30 GMT on Friday, with forecasts pointing to yet another solid report. Markets aren’t pricing in much chance of a Fed rate cut in the coming months, so any disappointment in these data could trigger a significant negative reaction in the dollar, whereas a positive surprise may not lift the currency too much. Having said that, the overall outlook surrounding the greenback still seems positive.

Still the only game in town

The US economy has clearly lost steam this year, as the prolonged uncertainty around trade has hit the manufacturing sector hard, and held back business investment. Indeed, forward-looking PMI surveys signal even softer growth in the final quarter, with the Atlanta Fed GDPNow model currently pointing to GDP growth of just 1.3% in annualized terms.

Yet, the situation isn’t tragic either. Consumption – which is by far the biggest contributor to US growth – remains healthy, supported by decent growth in real wages and a tight labor market. Likewise, consumer confidence looks strong and the recent rate cuts by the Fed have sent mortgage rates much lower, breathing some life back into the housing market.

In other words, the US may be losing momentum, but it’s still in a much better position than any other major economy at the moment – with both Europe and Japan barely growing.

The upcoming employment data are anticipated to confirm this (relatively) cheerful narrative. Nonfarm payrolls (NFP) are expected to clock in at 180k in November, much higher than the 128k in October. Part of that strength is likely owed to a strike at General Motors that ended in late October, which means that around 50k picketing workers will be counted as employed again this month, artificially boosting NFP. 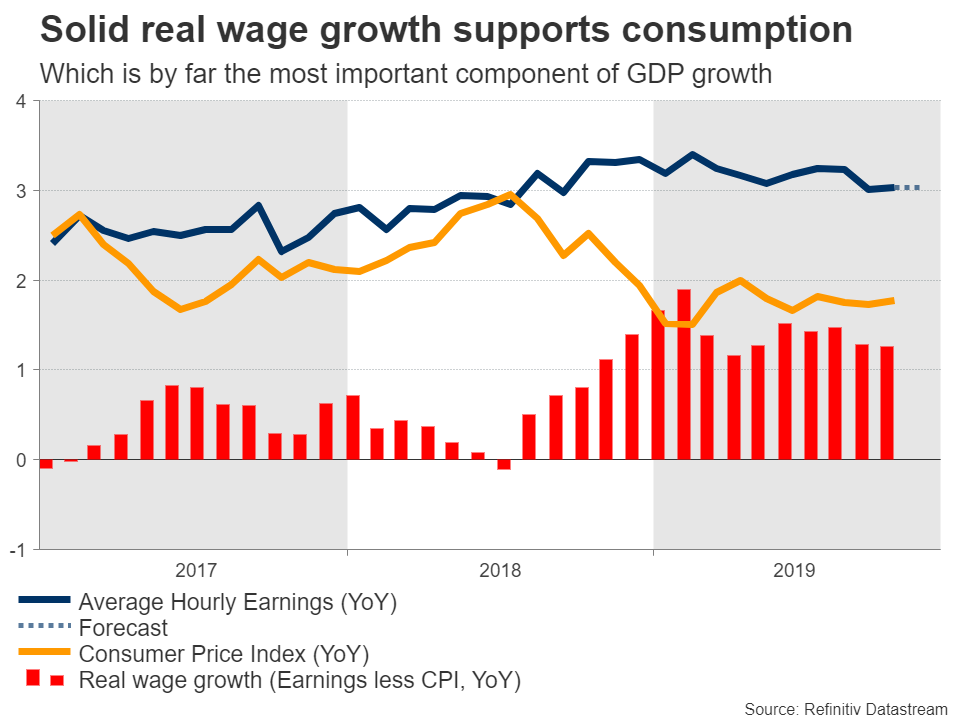 The unemployment rate is forecast to have held steady at 3.6%, while average hourly earnings are projected to have risen by 3.0% on a yearly basis, the same pace as in October.

In terms of the market reaction, the risks surrounding the dollar from this report may be asymmetric and skewed to the downside. A disappointment is likely to generate a bigger downside reaction in the currency compared to the corresponding upside reaction in case of stronger-than-expected figures.

The reasoning is: market pricing for future Fed rate cuts is already very subdued. According to pricing derived from the Fed funds futures, investors assign a mere ~20% chance for a cut by March. Therefore, a positive NFP surprise would only reaffirm the entire “the Fed is on hold” narrative, and by extension push the dollar only modestly higher, as there isn’t much to price out in terms of rate cuts. On the contrary, a negative surprise could bring this entire narrative into doubt, leading traders to price in much higher odds of Fed cuts, and thus generating a much larger downside reaction.

Moreover, a substantial upside surprise may be downplayed as being partly owed to transitory factors like the GM strike, which the Fed typically ‘looks through’.

In the bigger picture, the outlook for the dollar still looks favorable, for a lack of real alternatives. The euro area is mired in problems, and unless national governments decide to inject serious fiscal stimulus into their economies to boost growth, there’s little prospect for growth – and by extension for the euro – to truly bounce back.

Likewise in Japan, the economic data pulse is very weak and there’s little policy room to combat this, as national debt is already extremely high and monetary policy is exhausted.

Perhaps if the Fed starts easing policy much more aggressively, that could do the trick in pushing the dollar lower, by eroding America’s interest rate advantage. However, there’s little prospect of that happening over the coming months, unless economic data fall off a cliff or the trade war reignites.

Taking a technical look at euro/dollar, immediate resistance to advances could come from 1.1090, with an upside break opening the door for 1.1170.

On the downside, support to declines may be found near 1.0990, before the 1.0940 zone attracts attention.