The Reserve Bank of New Zealand (RBNZ) will hold its first policy meeting of 2020 on Wednesday, announcing its decision at 01:00 GMT. Investors see a less than 10% chance that the RBNZ will cut interest rates in February, though with downside risks on the up, those low odds may soon start to crawl higher. Growing fears about the impact of the coronavirus have already pushed the New Zealand dollar to the bottom of the FX performance league table this year and the currency’s fortunes are not likely to change for the better anytime soon.

Reason to sit on the sidelines

The RBNZ had an active 2019, cutting the official cash rate by 75 basis points as it was one of the first central banks to take pre-emptive steps to defend the New Zealand economy from a slowdown in global growth. However, the odds for additional rate cuts receded substantially after the November meeting when the Bank unexpectedly kept rates unchanged, defying predictions that it would lower them. Furthermore, the latest indicators on the economy have been more positive, giving the RBNZ an excuse to sit on the sidelines until a clearer picture emerges about the impact of the coronavirus. 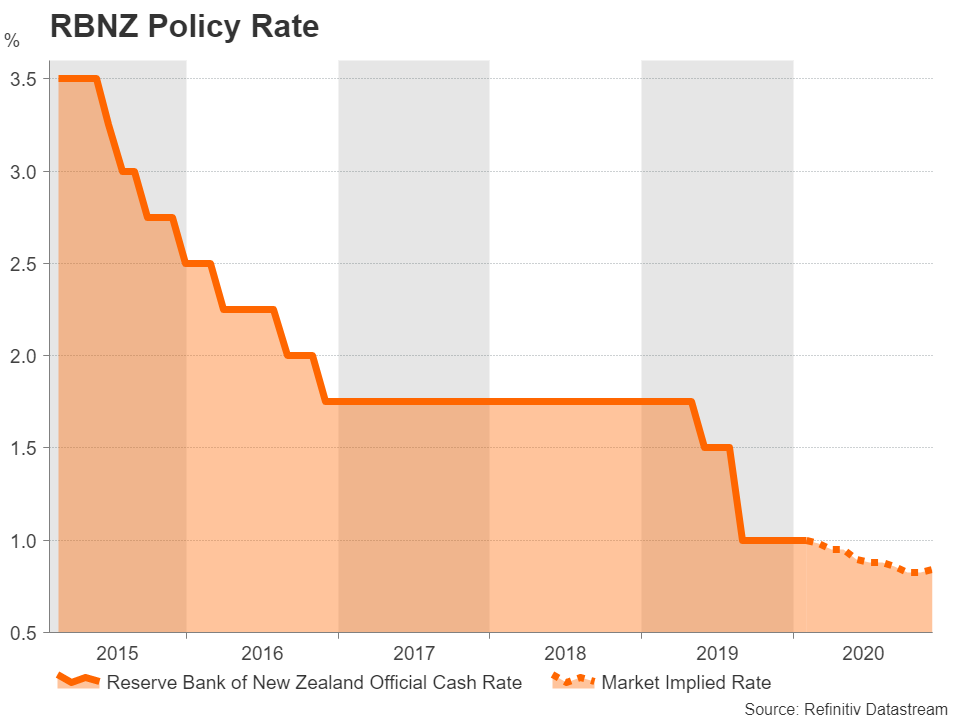 For now though, a pickup in the consumer price index, which jumped to 1.9% year-on-year in Q4 – just short of the mid-point of the RBNZ’s 2-3% target band, as well as rising inflation expectations in Q1 mean policymakers have reason to hold on to some optimism.

A not so downbeat tone by the RBNZ may help the battered kiwi recover back above the 61.8% Fibonacci retracement of the October-December upleg at $0.6413. Stronger gains are possible if a neutral statement is accompanied by an improvement in overall risk appetite, which could help the kiwi rebound towards the 50% Fibonacci of $0.6478 before aiming for the 200-day moving average near the $0.65 level.

Growth forecasts could be slashed again

However, investors will also be paying close attention to the RBNZ’s updated economic forecasts, which will be published alongside the policy decision, as well as Governor Adrian Orr’s remarks in his press conference (due at 02:00 GMT). The Bank had lowered its growth forecasts for both 2020 and 2021 in its November projections and further downward revisions in its latest Monetary Policy Statement could push up expectations of a rate cut in the coming months.

At the moment, markets see an even chance of a 25-basis point rate reduction by year-end. Investor wagers of a cut could multiply if the RBNZ turns even more gloomy about the outlook and cautions that it is keeping a close eye on the virus outbreak and the scale of the fallout. The kiwi could slip towards the November swing low of $0.6314 if rate cut bets were to be rekindled and bring the 10-year low of $0.6201 brushed on October 1 back into range.

New Zealand’s economy is likely to take a significant hit from the epidemic as the strict travel restrictions in China are sure to hurt the country’s tourism industry, which is heavily reliant on Chinese visitors. Other vital exports such as dairy products could also be negatively affected as overall demand from China is expected to be severely dampened.

In a further blow to growth, the devastating bushfires in Australia, which are still raging, are anticipated to inflict some damage on the New Zealand economy too. If it becomes evident that the drag on GDP growth from the growing headwinds will be far greater than initially foreseen, the RBNZ is certain to adopt a more cautious tone. However, a dovish shift is not likely to come before the March meeting when Q4 growth numbers would be available by then and policymakers will also have a better idea of the extent to which the virus has been harming the economy in Q1.