The Bank of Japan is expected to hold its fire when it concludes its two-day monetary policy meeting on Thursday, keeping its emergency stimulus measures intact. However, with growing evidence that the global economic recovery from the pandemic remains on a solid footing despite the sharp resurgence of the virus in many countries, including Japan, the BoJ is expected to add its own upbeat take on the economy. But, as far as the yen is concerned, it is politics that investors will be keeping a closer watch on as long-time Abe ally Yoshihide Suga is confirmed as Japan’s next prime minister.Virus’ economic pain is easing

Japan’s GDP contracted by 7.9% in the second quarter, performing somewhat better than other advanced economies but still going down in history as one of the biggest slumps on record. The relatively smaller contraction is also nothing to shout about when considering that growth was sluggish going into the pandemic and the recovery has been somewhat slower. 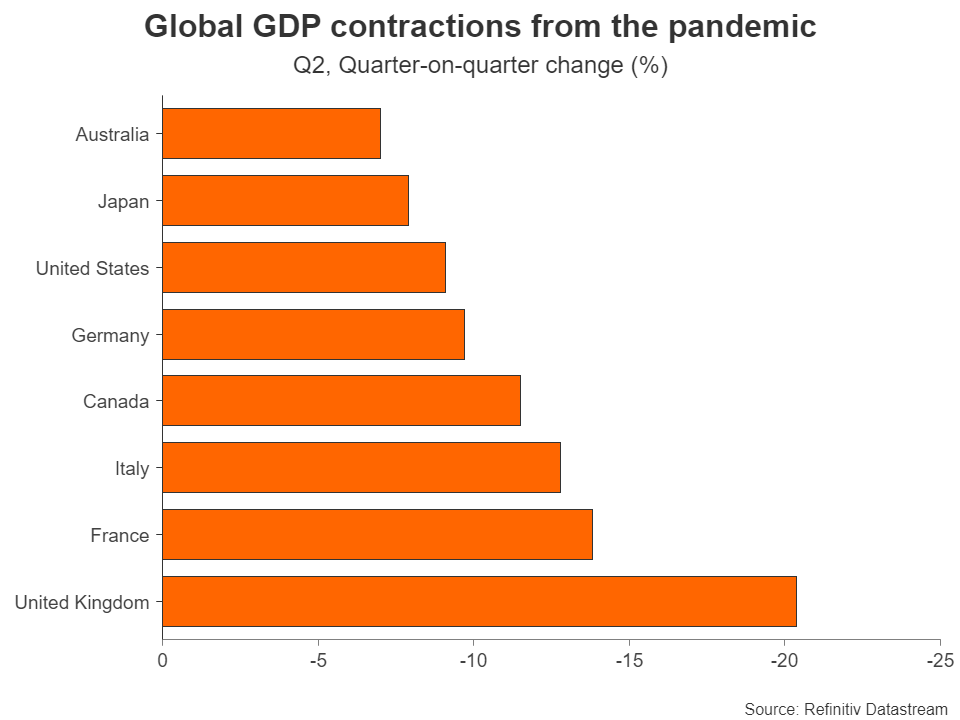 Nevertheless, a recovery is underway, taking the pressure off the Bank of Japan to ramp up stimulus in the near term. Exports, while down on a yearly basis, were up month-on-month in June and July. Industrial output also turned positive in the same period. But the rebound in consumption appears to have stalled, indicating there’s a long way to go before Japanese households are feeling confident enough to part with their cash more sparingly. Furthermore, inflation is hovering around zero again, undoing the recent progress to lift prices. 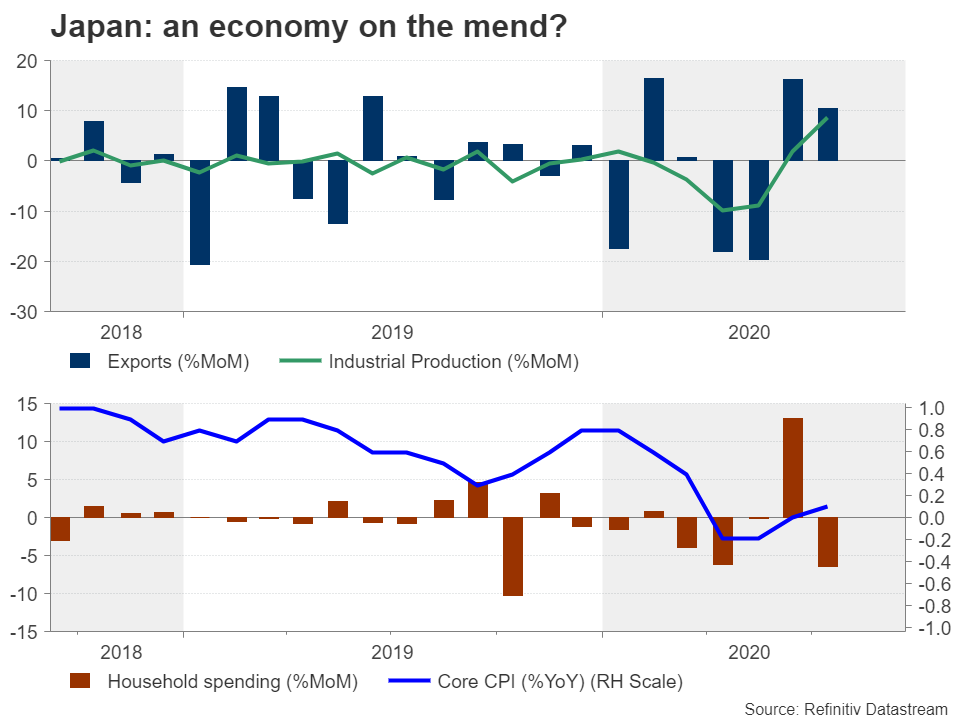 The bumpy recovery is likely to keep the BoJ on an ultra-dovish path for at least the foreseeable future, but policymakers will probably acknowledge the improving picture by sounding more optimistic. A more upbeat statement would signal the Bank has become less worried about the economy and that it could sit on the sidelines for a while. However, altering its language and tweaking the emergency lending facilities are all that the BoJ can do given that it’s almost out of ammunition.

That fact alone is why changes to policymakers’ outlook aren’t about to spark much reaction in the yen and haven’t for some time. If a brighter or bleaker assessment can’t be followed up with a substantive policy response, the market response will be equally muted. Hence, this is why the yen remains primarily driven by safe-haven flows and has been declining against most of its major peers over the summer as the virus-induced panic subsides.

Against the US dollar, however, which is another safe-haven currency, the yen is confined to a narrow range, with its broader trend tilted slightly to the upside. This trend is something that both the BoJ and the government are probably carefully monitoring as a strong currency would weigh on Japan’s export-dependent manufacturers, as well as depress prices. After the Covid-19 crisis forced the Federal Reserve to slash rates to near zero, the greenback lost all its yield advantage over the yen, opening the door to greater downside risks for the dollar/yen pair.

This then raises the question of how the BoJ and the government led by incoming prime minister, Yoshihide Suga, may engineer to keep the yen down. Suga is a strong advocate of Abenomics and most expect him to maintain the government’s close working relationship with the Bank of Japan to keep the monetary and fiscal stimulus taps wide open in a coordinated fashion.

Suga has already signalled his support for additional relief for struggling households and businesses. However, he has in the past displayed some resistance to increased public spending so future fiscal packages may not be as generous as the previous ones were under Shinzo Abe. Having said that, Suga was a key player in weakening the yen during Abe’s tenure and may take a more interventionist approach in preventing the appreciation of the exchange rate.

Jobs may become the new focus in Japan

But perhaps the most significant change markets could see from Suga is the prioritization of jobs. The new prime minister reportedly wants to focus more on protecting jobs and may even give the BoJ a role in achieving that. Such a move would be negative for the yen as the BoJ might potentially have to find new ways to keep the economy stimulated in an attempt to promote a healthy labour market on top of its inflation goal.

In the short term, however, there’s nowhere much for dollar/yen to run, with the 105 level being the key barrier to watch to the downside for a bearish break, and the 50-day moving average being the immediate resistance area around 106.20 that could set a more bullish tone if overcome.

Week Ahead - RBA to stand pat but BoE might taper; Can a bumper NFP excite after dovish Fed?