Another debt ceiling crisis is brewing in the United States. Past episodes were met with apathy from investors - everyone knows this is mostly political theater, and a solution will ultimately be reached. But this time might be different. This debate has serious implications about market liquidity, so the outcome matters for stock markets. The plot twist is that a deal might be ‘bad news’ for equities.

Another debt ceiling standoff is upon us. The US reached its $31.4 trillion debt limit this week, forcing the Treasury to engage in extraordinary cash management tactics. These maneuvers will buy some time for the politicians in Congress to find a deal and raise the debt ceiling again. Without an agreement, the US could default on its debt by June according to Treasury Secretary Yellen.

Investors have seen this movie before. There have been numerous debt ceiling fights over the years, and every single one has concluded with a deal. Politicians might rage and take matters to the brink, sometimes even shutting down the US government in the process, but a deal is always reached sooner or later. Nobody wants to be responsible for an unnecessary default on US debt. 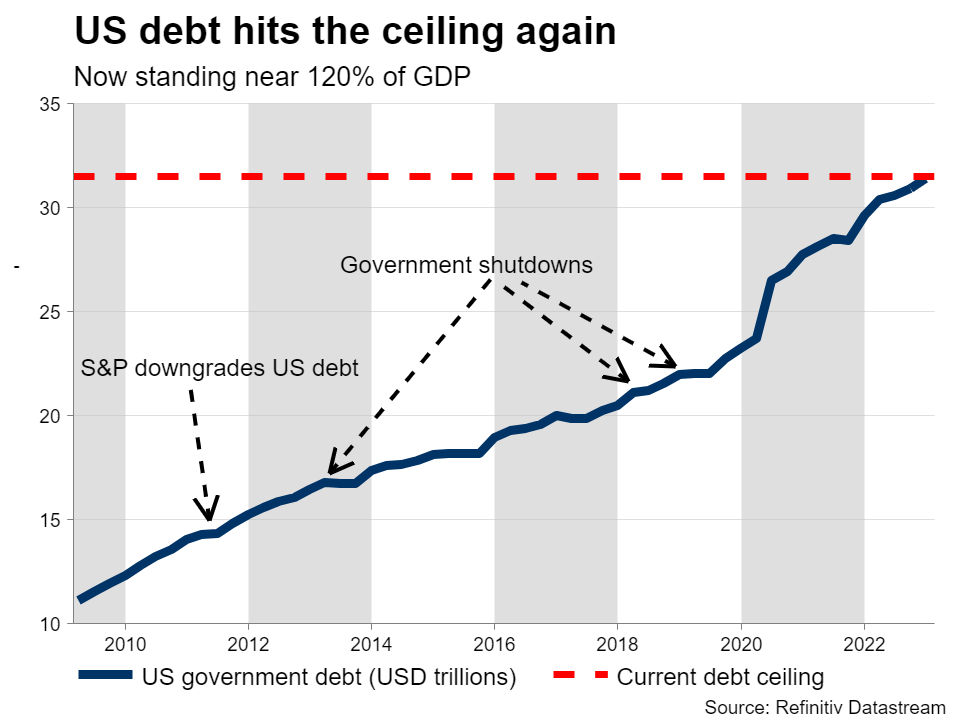 The most extreme case of such brinkmanship was back in 2011, when political gridlock led the Standard & Poor’s ratings agency to downgrade the credit quality of US debt for the first time. That sent shockwaves through the financial system, with stock markets falling sharply in the aftermath, teaching political leaders a valuable lesson about the need for compromise.

While Congress tries to reach an agreement, the Treasury will run down the Treasury General Account (TGA) it holds at the Federal Reserve to meet the day-to-day obligations of the federal government. When this cash balance is being reduced, it is essentially an injection of liquidity into financial markets, with effects similar to quantitative easing. 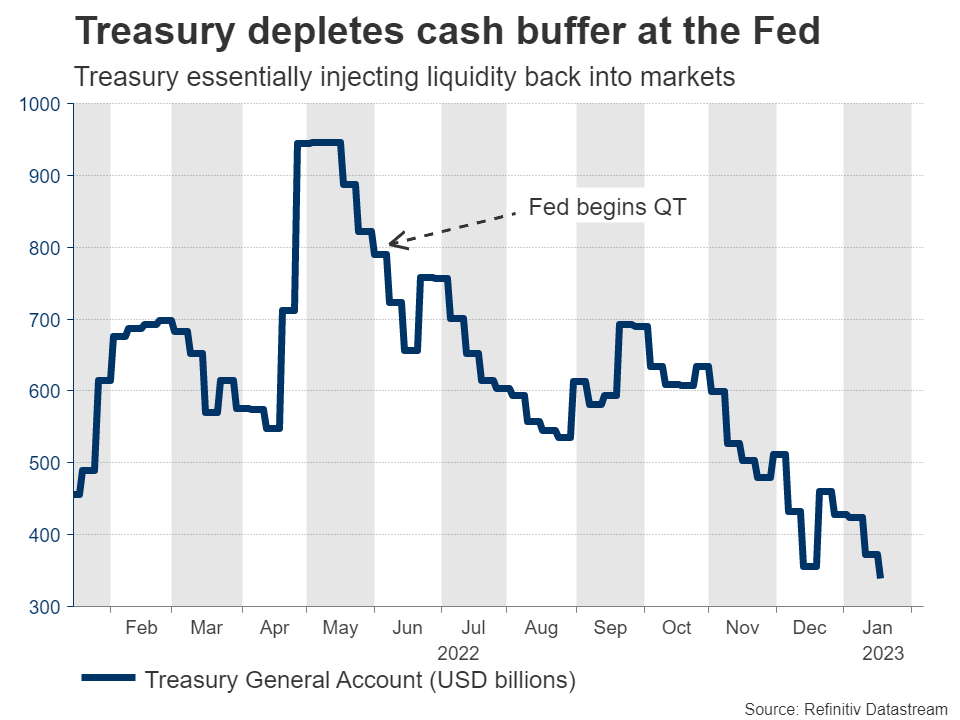 Therefore, even though the Fed has been draining liquidity out of the system through its quantitative tightening program, the actions of the Treasury have offset the impact of this process lately. More than offset, in fact. The Treasury’s liquidity injections have been greater than the Fed’s liquidity reductions this year.

In other words, the Fed and the Treasury have been working at cross purposes, and the net impact has been that liquidity was added into the system, not drained out. No wonder then that stock markets and other risky assets have been partying like there’s no tomorrow. Liquidity is extremely important for asset prices - the higher the available liquidity in the market, the better risky assets tend to perform. 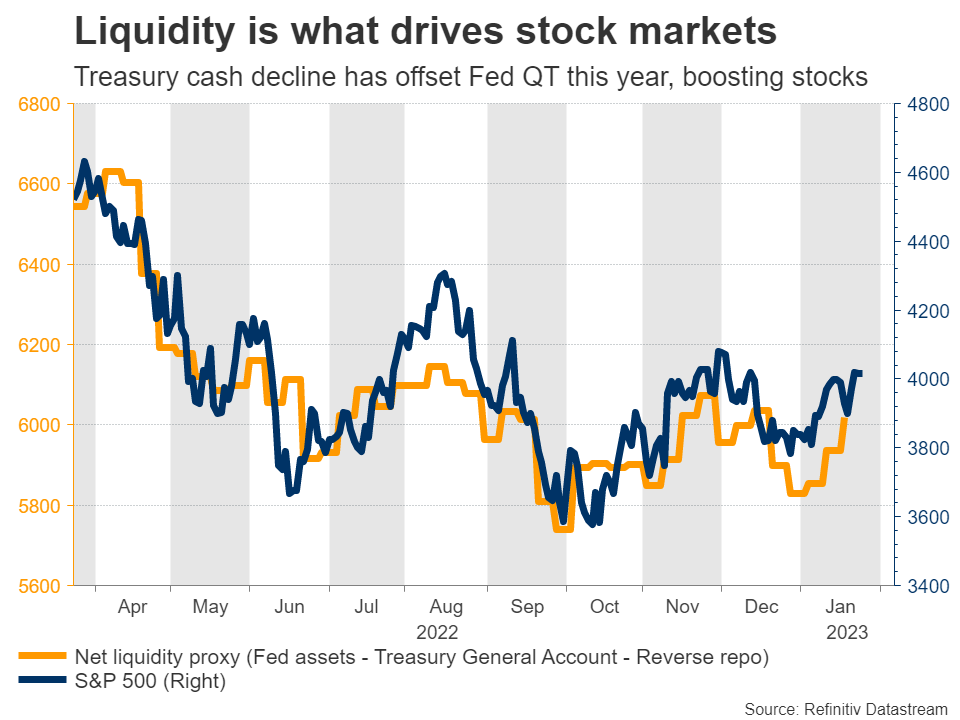 One way to decide whether this rally is driven by liquidity or fundamentals is to look at the leadership. It’s not high quality companies that have seen the biggest gains this year, but rather the riskiest, profitless, and most heavily shorted names. The meme stock mania has returned, with businesses that have declared bankruptcy like Bed Bath & Beyond rising 47% this month, and even crypto is back in fashion.

A problem for stocks

The bottom line is that this process cannot go on forever. The Treasury General Account currently stands at $340 billion, and is declining because of the debt ceiling. This has paradoxically spread cheer in the markets because of the liquidity effect, but at some point, this process will go into reverse.

According to Treasury officials, the normal level for the TGA is around $700 billion. This means that once there is a debt deal, the Treasury will begin to rebuild its cash buffer, removing liquidity from the market.

That could be a nightmare scenario for stocks, especially if it coincides with continued quantitative tightening by the Fed. It would be ‘liquidity removal on steroids’, with the Fed and the Treasury both draining money out of the market simultaneously. The impact would probably be clearer in smaller and riskier stocks - the ones that have performed so well this year. 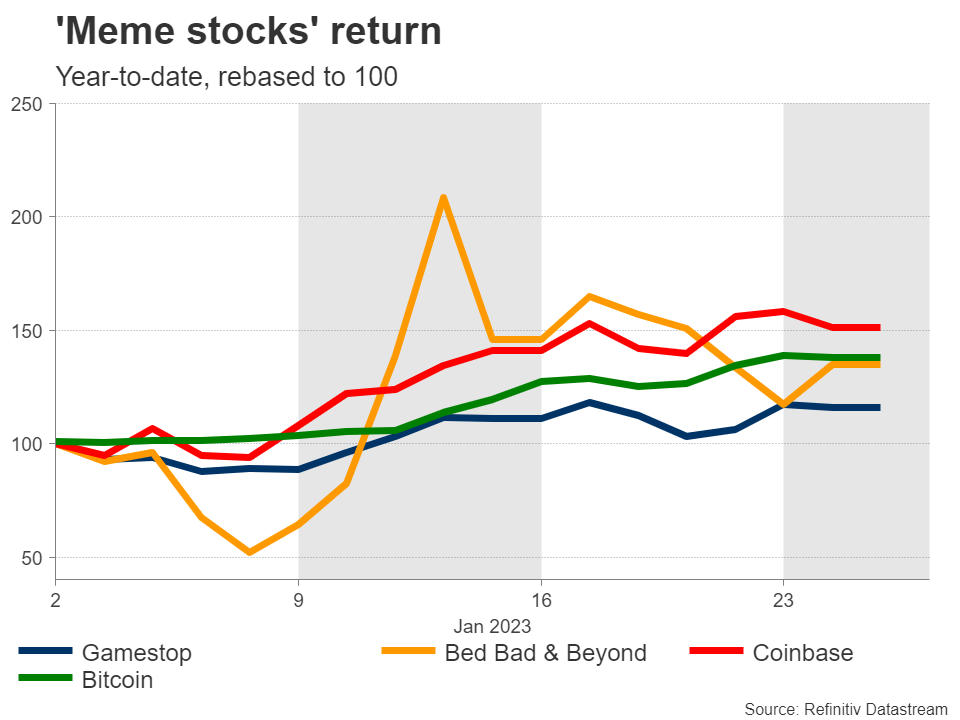 Now to be clear, this is only one variable that can drive stock markets. Macroeconomic conditions, the Fed’s policy stance, and the evolution of corporate earnings could play equally significant roles this year.

Still, liquidity is paramount. Everyone expects a debt ceiling deal to boost equity markets, because it will eliminate the imminent risk of US default. In reality, it could be negative news through the liquidity channel. Perhaps not immediately, but over the following weeks.

Keep a close eye on the debt ceiling saga - it’s more than political theater this time.