Japanese GDP numbers for Q3 are coming up during the early Asian session on Thursday (Wednesday 23:50 GMT). Forecasts point to a solid quarter, as domestic demand remained strong even despite global worries keeping a lid on exports. That said, much of that strength was likely owed to consumers front-loading purchases ahead of a planned VAT increase, so the next quarter may be especially weak as consumption falters. As for the yen, it has gotten beaten up recently, but if the mood around trade continues to sour, it may stage a strong comeback.

In the land of the rising sun, quarter-three GDP figures will reveal just how much Japanese consumers front-loaded their spending ahead of the consumption tax increase in October. Forecasts suggest growth will clock in at 0.2% on a quarterly basis, a slowdown from the 0.3% in Q2. In annualized terms, that would translate to 0.8%, from 1.3% earlier.

If anything, these forecasts appear a touch conservative. Private consumption accounts for a little more than half of Japanese GDP, and in the year to September, household spending soared by an astronomical 9.5%, implying that an upside surprise in these data may be more likely than a downside one.

Yet, consumers going out on a shopping frenzy isn’t always a good thing. If spending is curtailed afterwards to make up for that over-consumption, that could push growth off a cliff in the next quarters. That’s exactly what happened the last time this VAT tax was raised back in 2014 – a technical recession ensued as spending came to a screeching halt. 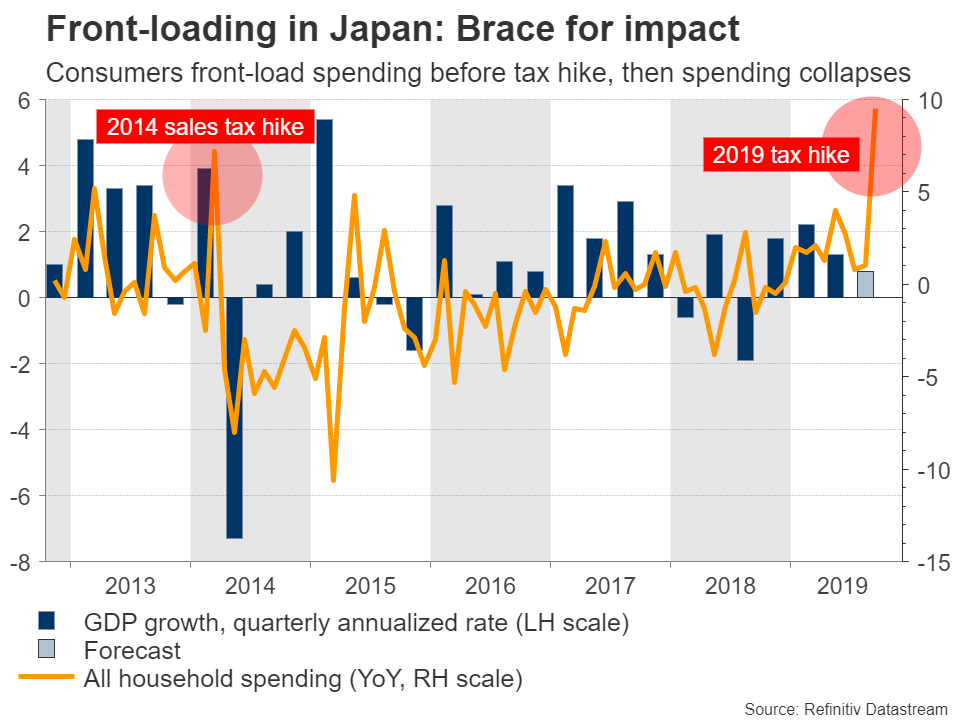 The Bank of Japan (BoJ) knows this all too well, so policymakers are unlikely to get excited about a strong Q3. They will most probably wait to see the damage in Q4 before they draw any real conclusions about the economic outlook.

Yen set for a comeback?

As for the yen, it barely reacts to data, so the most important driver will be risk sentiment – and specifically the trade war. The haven currency lost considerable ground in recent months, as Washington and Beijing hyped the prospect of a ‘phase one’ deal. Yet, recent reports suggest that even this partial deal is not as certain as the two sides have been implying. Even if it’s ultimately signed, getting to a ‘phase two’ deal is much more unlikely, as that is where all the difficult issues will be sorted out.

The bottom line is that markets may have gotten ahead of themselves in pricing in a better outlook for trade, and following the euphoric rally of recent weeks, it might not take much bad news to trigger a substantial correction. Since the yen is a haven asset, it could stage a strong comeback in case the mood sours again.

In fact, it may be a double whammy of gains for the yen if the situation escalates – both on safe haven inflows and monetary policy convergence expectations. In this case, investors would start pricing in more rate cuts by the major central banks, and since the BoJ can’t ease much further given its already massive stimulus program, that would make the currency more attractive from a rate differential perspective.

Taking a technical look at dollar/yen, initial support to declines may come from the intersection of the 107.90 zone, the uptrend line drawn from the August lows, and the 50-day moving average.

On the flipside, if a ‘phase one’ deal is signed soon for example, the pair could challenge the 109.50 area again, with an upside break turning the focus to 110.70.