Twitter, Inc. will announce its earnings result for the fourth quarter on Thursday before the market open. The company is expected to report somewhat better earnings this time round compared to the third quarter when it missed both its revenue and earnings per share estimates, sending the stock price crashing more than 20%. As always, however, investors’ main concern will be how many new users the social media firm added as it struggles to maintain user growth.

Twitter is expected to report revenue of $998.45 billion for the three months that ended December 31, representing a yearly increase of 9.9% and a quarterly rise of 21.2%. Earnings per share (EPS) are forecast to have hit $0.29 per share in Q4, which would represent a drop of 5.5% from a year ago but a whopping 70.6% improvement from the previous three months. 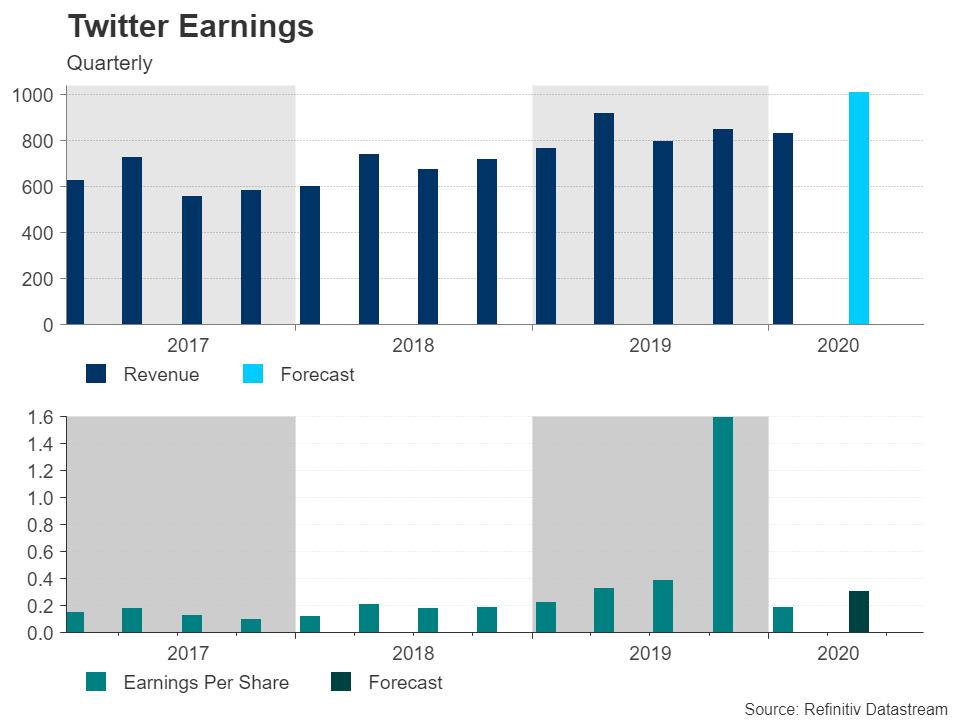 The stronger expected earnings would be a welcome relief for shareholders and could mark a turnaround for Twitter shares, which underperformed the broader market in 2019, having started the year on a solid note. The slump in the stock price after the Q3 earnings came despite the jump in the average monetizable daily active users (mDAU) during the period, which surged by 17% over the year to 145 million. 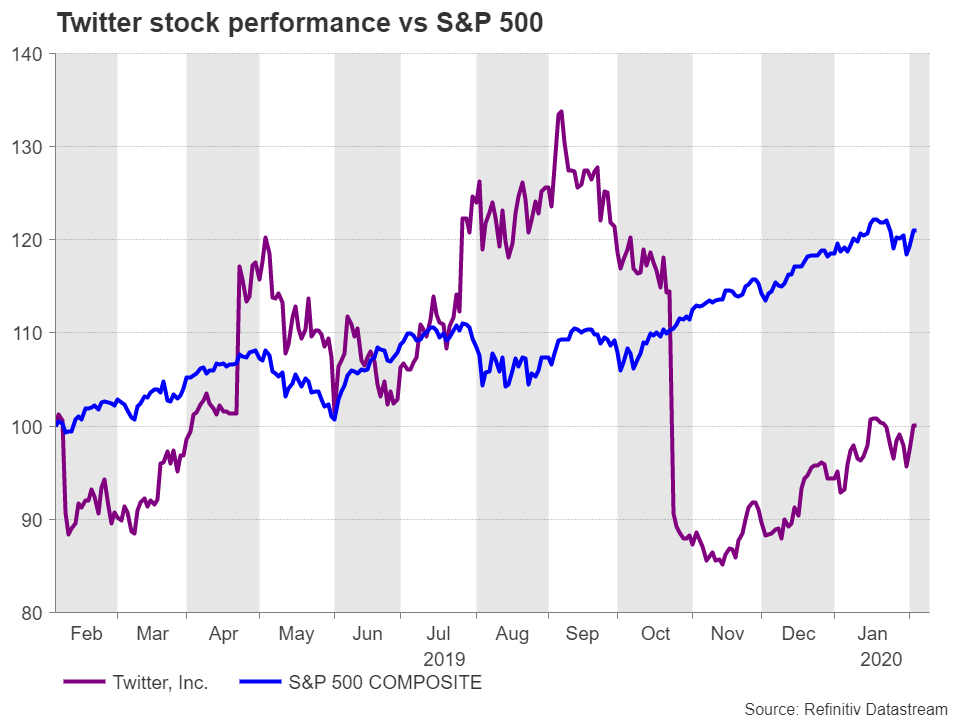 Twitter defines monetizable daily active users as those accounts that are authenticated and are able to receive ads. It’s thought that mDAU were up sharply in Q4 too. Nevertheless, Twitter’s daily user numbers are dwarfed by the likes of Facebook, which has 1.6 billion users, while smaller rivals such as Instagram and Snapchat have also been catching up.

Aside from user growth, investors will be paying close attention to how well the company has been dealing with the glitches in its ad interface that have been affecting its ability to correctly target ads. The technical issues knocked third quarter revenue and if the problem is still not resolved, the prospect of a further drag on earnings is likely to hurt the company’s share price.

Another possible hit to earnings could come from the company’s decision to ban political ads. The unusual policy is bound to result in a loss of advertising revenue, and it remains to be seen whether the benefits of gaining increased public trust will pay off through higher usage. In the long run, attracting less scrutiny from regulators, especially when compared to its competitors such as Facebook, may also boost the relative share price performance.

Moreover, Twitter has been carrying out a number of other product enhancements over the past year designed to stamp out abusive content and improve user experience and engagement on its platform, as well as attract more ads. Any indication that the company’s investments have started to bear some fruit through increased ad income and higher daily active users is likely be greeted positively by shareholders.

Better-than-expected earnings results and/or profit guidance could lift the stock price to around $37.24, which is the 50% Fibonacci retracement of the September-November downleg. Sharper gains could see Twitter shares hitting the $40 mark, just above the 61.8% Fibonacci.

To the downside, any sell-off from disappointing earnings would initially find support at the 50-day moving average around $32, before revisiting the November low of $28.63.

The Company’s low price/earnings (PE) ratio relative to its peers (16.59 vs 23.2) makes it an attractive investment, potentially limiting any down move, even if it’s not able yet to excite its shareholders. As things stand, however, there’s little to make traders more bullish about the stock price and analysts are maintaining their mean recommendation of ‘hold’ for Twitter shares.

In the year ahead, a big test for the platform will be the 2020 US presidential race. Investors will likely be hoping to hear in the earnings call what the company’s plans are on how it plans to capitalize on the big event following the decision to ban political ads.