The coming week will be a data-heavy one for the United Kingdom and kicking things off on Monday will be third quarter GDP numbers along with the monthly breakdown of economic output, as well as trade figures for September. The data, due at 0930 GMT, are expected to point to a stagnant economy as Brexit and trade uncertainty take a toll.

The British economy contracted by 0.2% in the second quarter, as production fell back after being boosted artificially in Q1 by Brexit stockpiling ahead of the UK’s original EU departure date of March 29. But with Brexit still unresolved and Westminster in political chaos, not to mention a deepening of the global economic slowdown, growth is expected to remain sluggish even if the UK avoids a technical recession in Q3. 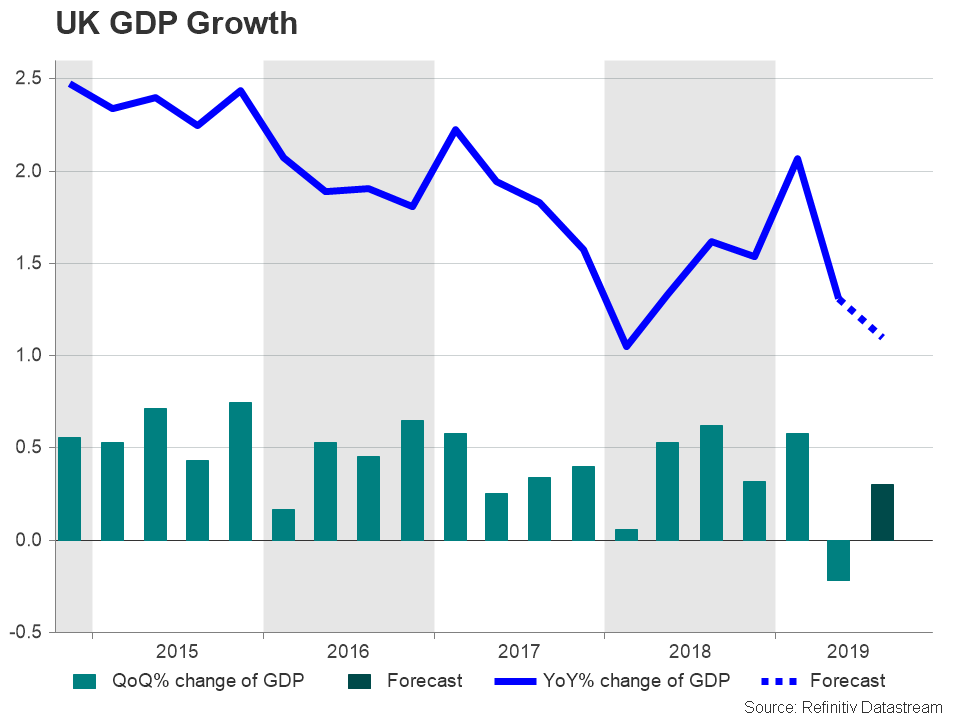 GDP is forecast to have expanded by 0.3% quarter-on-quarter in the three months to September, pointing to reasonable momentum in the economy. On an annual basis, growth is forecast to have eased from 1.3% to 1.1%. However, when filtering out the distortion from the first and second quarters, the growth trend isn’t quite so reassuring. The Markit/CIPS PMIs seem to support this as they were more consistent with a contraction of 0.1% for the third quarter. Hence, a negative surprise appears more likely than a positive one.

Q3 expected to have ended on a negative note

On a monthly basis, GDP is projected to have shrunk by 0.2% in September, suggesting the third quarter ended on a weak note. The other indicators are not expected to show much of a different picture either for September. Industrial output is forecast to have declined by 0.1% month-on-month, while manufacturing production is expected to have fallen by 0.2% m/m. 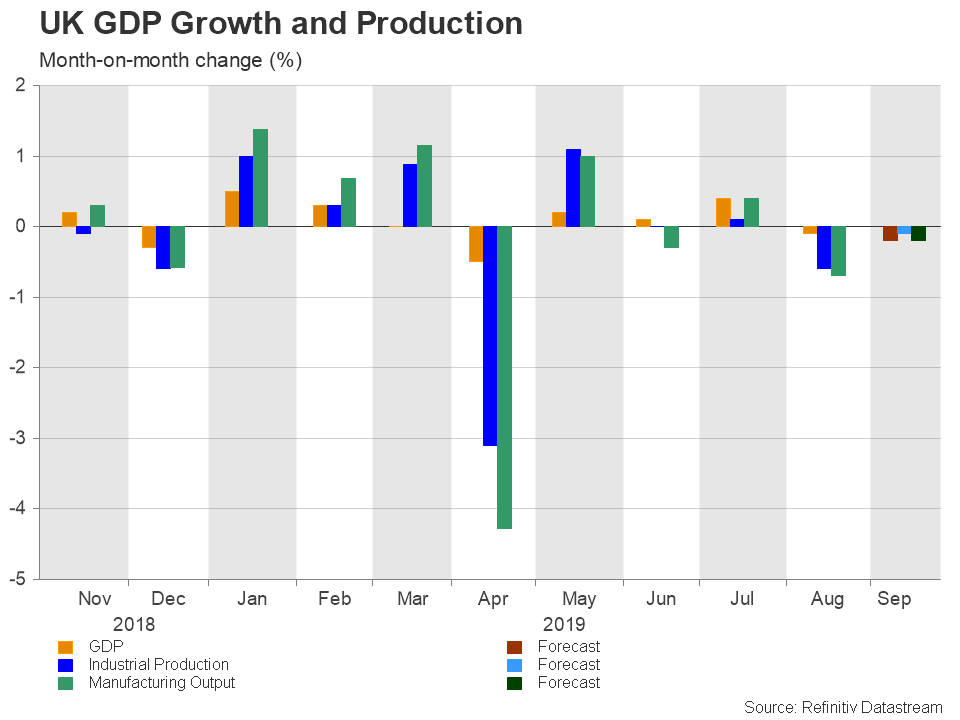 A lacklustre set of figures could drag the pound towards its 200-day moving average at just above the $1.27 handle. If breached, the pound could face steeper losses, with the 38.2% Fibonacci retracement of the March-September downleg at $1.2505 becoming the next major target to the downside.

On the other hand, better-than-expected numbers would be a boon for sterling’s latest uptrend, which appears to have hit a stumbling block near $1.30. Upbeat growth figures could revive the rally and drive it towards the 78.6% Fibonacci of $1.3078.

Brexit and trade uncertainties to linger

Looking beyond the third quarter, the situation isn’t anticipated to improve much in the final three months of 2019 as yet another Brexit extension and uncertainty surrounding the outcome of the snap general election on December 12 are likely to keep a lid on business investment for at least until the early parts of 2020.

On Thursday, the Bank of England abandoned its long-held tightening bias at its policy meeting and altered its guidance to state that the next move in interest rates could be “in either direction”. BoE Governor Mark Carney made it clear that the rate path is conditional on how Brexit pans out and how trade tensions affect the global economy.

If the pre-Christmas poll culminates in a win for Boris Johnson’s Conservatives and the party is able to restore its parliamentary majority, it would put the UK on track the leave the EU on January 31. And although the Brexit saga wouldn’t end there as negotiations would enter the next phase – the future relationship between the UK and the EU – it would at least remove a significant portion of the uncertainty and help businesses to unfreeze some of their investment plans.

However, if no party was to gain a majority from the election, the British economy could be faced with yet more twists and turns as this would open the prospect of further delays to the Brexit deadline and possibly a second referendum.