With the Fed having cut rates again, the focus now turns to the US employment data that are due on Friday at 12:30 GMT. The ISM manufacturing PMI for October will follow at 14:00 GMT. Given some one-off factors, the risks surrounding the dollar from the jobs data seem tilted to the upside, as any disappointment may be viewed as a transitory phenomenon. The broader picture looks positive too, despite the recent pullback.

The US economy continues to lose its shine, as the boost from the 2018 tax cut fades and a protracted trade war holds back investment, though the slowdown has so far been contained. While the manufacturing sector has come to its knees as exports started to dry up, domestic consumption has held up quite well, keeping the much-larger service sector afloat. That said, the longer this manufacturing sickness endures, the bigger the risk that the weakness eventually infects consumers and the entire US economy.

Struggling with the times?

The upcoming data will provide a first glimpse into how the US entered Q4, so they’ll be crucial. Nonfarm payrolls (NFP) are forecast to have risen by only 85k in October, much less than September’s 136k, and likely not enough to keep up with US population growth. The unemployment rate is thus forecast to tick up, albeit from a very low level, while average hourly earnings are projected to pick up some steam and reach 3.0% on a yearly basis, from 2.9% earlier. 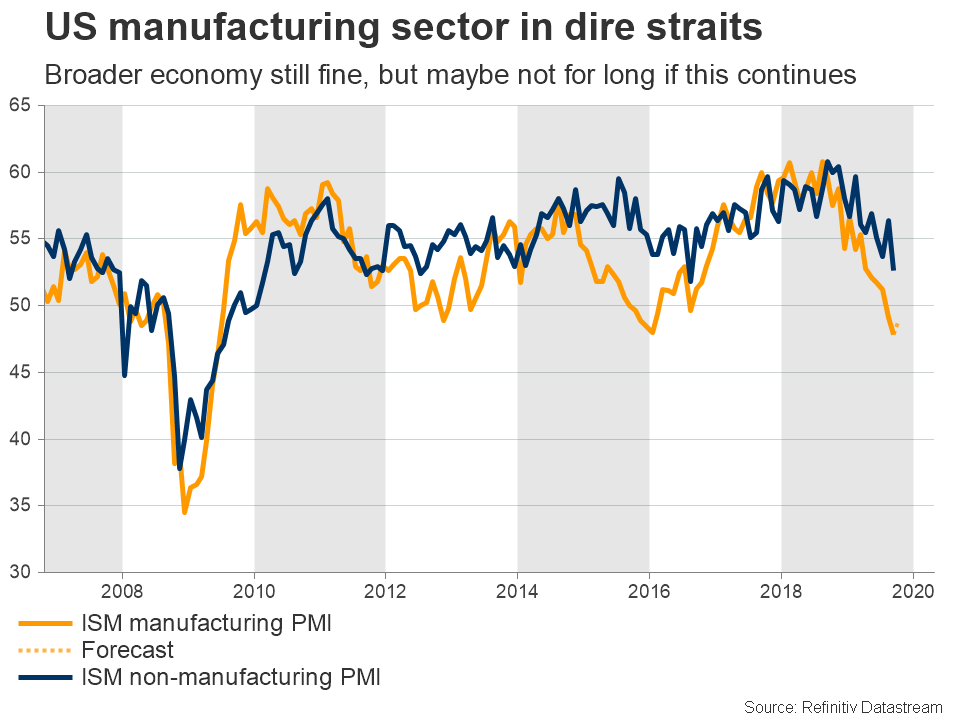 Digging beneath the surface though, the expected softness in payrolls may be misleading. Much of the shortfall seems owed to a month-long strike at General Motors, since picketing workers are counted as unemployed in the payrolls report. That strike has ended already, so they will be calculated as employed again in next month’s jobs report, providing it with an artificial boost – which is why looking at a three-month average gives a far better picture.

Therefore, any significant disappointment relative to consensus this month may be blamed on one-off factors that the Fed typically ‘looks through’, so the risks surrounding the dollar from this data look tilted to the upside. A negative surprise may have little impact on the Fed’s thinking, therefore triggering only a mild downside reaction in the currency, whereas a positive surprise could be taken as a sign of strength given the subdued expectations and push the dollar much higher.

Looking beyond the market reaction though, this jobs report may provide more noise than signal.

Manufacturing may be bottoming out

Perhaps a better gauge of the economy will be the ISM index. In September, it fell further into contractionary territory to hit a 10-year low, signaling that manufacturing is shrinking at an accelerating speed. The forecast is for the index to rise slightly in October but to remain below 50, indicating that while the sector remains in contraction, the situation is improving slightly. The recent US-China ceasefire may have helped calm some nerves.

Turning to the markets, the outlook for the dollar still seems positive. For all its troubles, the American economy is still miles ahead of Europe – which is mired in cyclical, structural, and institutional problems. For this dynamic to change so that the euro can outperform in a sustainable way, either the Fed needs to get ‘ahead of the curve’ by cutting rates much more aggressively or Germany has to roll out a substantial fiscal stimulus package. Neither of these is likely over the coming months.

Looking at euro/dollar, potential declines may stall initially around 1.1070, with a downside break opening the door for the 1.0990 region.

On the upside, another wave higher could encounter resistance near 1.1180, before the 1.1230 area comes into view.