US oil giants Exxon Mobil Corp and Chevron Corp are set to announce their first quarter earnings results on Friday, May 1, amid the oil industry facing its worst crisis in a generation. It goes without saying then that both Exxon and Chevron will report a big drop in revenue when they announce their results before the market open. But with no one actually doubting that the oil sector will be able to bounce back once the market rebalances itself, investors will be trying to ascertain who will come out of the crisis stronger.

Exxon – the world’s fifth largest company by revenue – is expected to see its Q1 revenue plummet by 30.4% on an annual basis to $44.3 billion as weaker oil prices likely hurt the company’s income from upstream operations. It’s worth being reminded that the slide in oil had started in early January before accelerating in March when the virus crisis erupted, so the impact of lower prices would have been felt across the entire quarter.

Earnings per share (EPS) is forecast to take an even bigger tumble, dropping a whopping 93.7% year-on-year to 3 cents according to Refinitiv I/B/E/S estimates. That would just keep it in positive territory, but not for long. EPS is anticipated to turn sharply negative (-63 cents) in the second quarter and not return to profit until the second quarter of 2021. 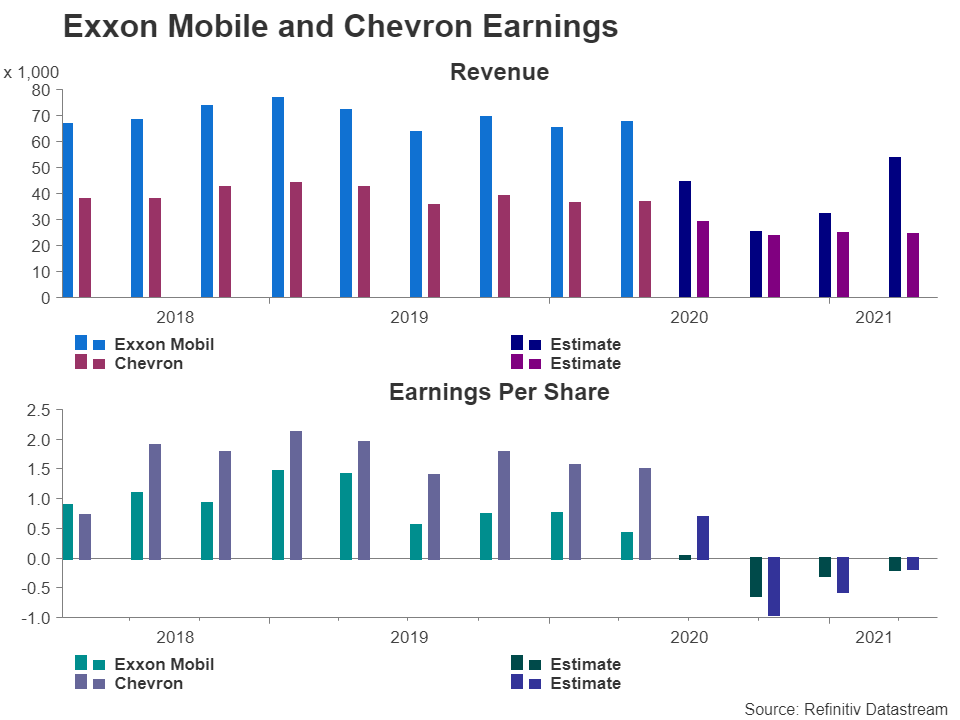 The outlook for Chevron’s earnings is equally gloomy. The company’s revenue is estimated to have plunged by 17.6% y/y to $29.0 billion in Q1, while EPS is forecast to have fallen 51.1% to 68 cents. The decline in earnings is expected to worsen in the coming quarters with EPS hitting a loss of 95 cents in Q2.

Whether the estimates for the second quarter get revised higher or lower will not only depend on the companies’ own guidance but how the COVID-19 pandemic unfolds in the coming weeks and months. The freefall in oil prices has pushed many smaller energy firms to the brink of collapse. The fate of bigger companies is also uncertain as the bailout fund included in the US government’s near $3 trillion virus stimulus does not cover the oil and gas sector. The Trump administration is struggling to get Congress to approve funds for energy companies.

With some US states beginning to ease social distancing measures, allowing some businesses to reopen, it’s easy to assume the worst is over. But even if demand for fuel begins to pick up as the lockdowns are gradually lifted, there is little prospect of US and global oil consumption recovering to the levels it was prior to the outbreak of the coronavirus.

This puts the focus on what measures oil and gas firms can take themselves to ride out the virus storm. The easy option is to cut capital expenditure and freeze costly projects. Chevron has already slashed $4 billion in capital spending, while Exxon expects to reduce its investments in 2020 by 30%. The other obvious target for cuts is dividends. However, this is likely to be a controversial decision for oil CEOs as big multinational oil firms have a proud record of being consistent with their dividend payouts and past behaviour shows they prefer to raise cash through borrowing to maintain their dividends.

In fact, Exxon successfully borrowed $18 billion in March and April by issuing corporate bonds. With the Fed committed to supporting the markets and preserving credit flows to businesses, energy giants will probably have no trouble tapping into debt markets. And investors do not appear to be worried either when looking at the share price performance.

Exxon’s stock has rallied by almost 50% from the trough plumbed in March at the height of the virus turmoil. Chevron has done even better, with its stock rebounding by more than 80%. Year-to-date, the virus damage is more evident with Exxon still down about 32% and Chevron 21.5%. Amazingly, both Exxon and Chevron have maintained their mean recommendations of ‘hold’ and ‘buy’ respectively, despite oil being one of the hardest hit industries from the pandemic. 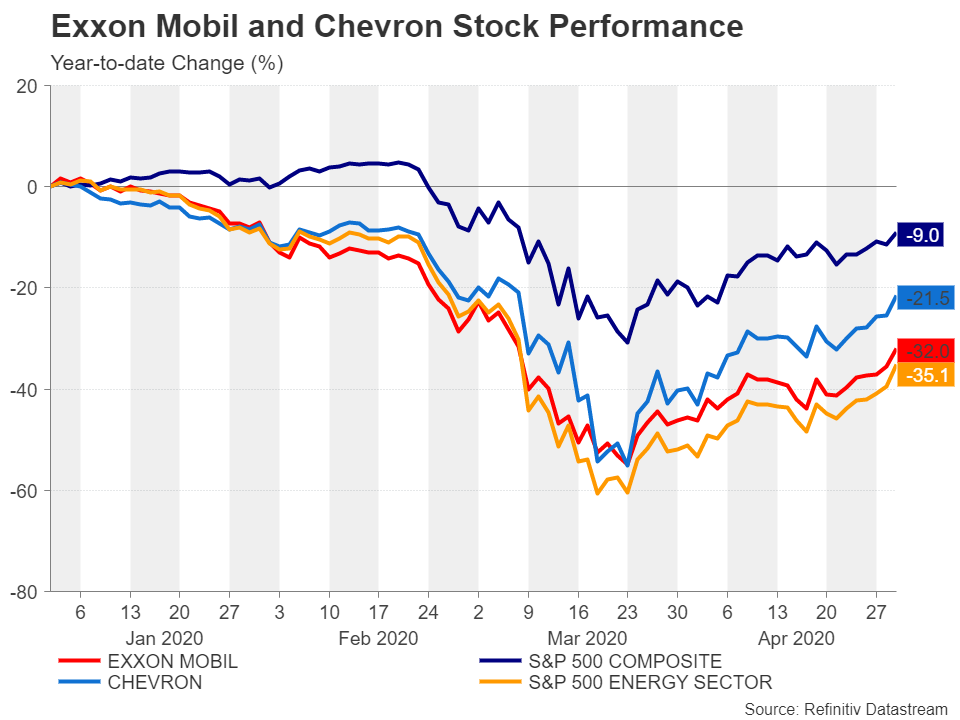 All hopes on market rebalancing

Whether the recovery in their share price proves sustainable will probably depend on the extent to which oil production declines in the coming months. With the chances of another OPEC-led cut being remote, the sector’s best hope is for the market to adjust itself and that’s likely to come at the expense of US shale producers.

American shale firms were already feeling the pressure from weaker oil prices and the virus impact has only deepened the slump. The number of active oil rigs stood at just 378 in the week ending April 24, down from 670 at the start of 2020. If that trend continues and the demand outlook starts to brighten as more economies reopen, there will be a strong case for a rebound in oil prices from the current historical lows.