With Brexit on pause as UK politicians prepare to battle out their differences in a general election, the Bank of England policy meeting and the all-important services PMI will be the main drivers for the resurgent pound this week. The services PMI, due on Tuesday at 0930 GMT, will be monitored to see whether the UK economy is on the mend after a dismal two quarters, while the Bank of England could finally drop its tightening bias when it announces its latest policy decision on Thursday (1200 GMT) in the face of another Brexit extension and slowing global growth.

UK growth has been patchy lately

Economic growth in Britain has been patchy to say the least during 2019 and a technical recession remains a risk as the never-ending Brexit uncertainty and the US-China trade war, which has dented growth significantly in Germany – one of the UK’s main trading partners – have taken their toll on businesses. The big concern is the impact on the UK’s dominant services sector, which has been underperforming all year and there’s signs that consumers may also be tightening their purse strings.

All this puts the spotlight on Tuesday’s services PMI by IHS Markit/CIPS as a poor start to the fourth quarter would make it awkward for the Bank of England to maintain its questionable tightening bias. The services PMI is forecast to have risen from 49.5 to 49.7 in October, pointing to a deceleration in the pace of decline in services activity. 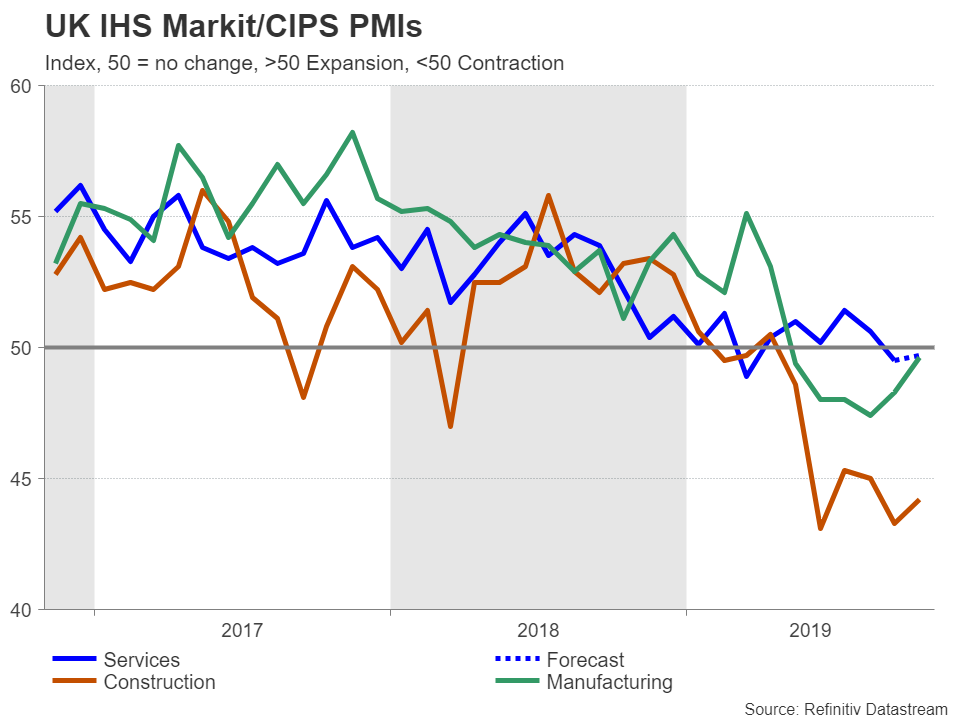 But a mild improvement is unlikely to allay worries that the UK economy remains in trouble and that it may require some policy easing to lift growth. Those concerns may finally be feeding through to the BoE’s Monetary Policy Committee as there have been some signs in recent weeks that policymakers are having second thoughts about pressing on with rate hikes should a Brexit deal be approved by Parliament.

Michaels Saunders – one of the BoE’s most hawkish MPC members – surprised markets in September when he said, “I think it is quite plausible that the next move in Bank Rate would be down rather than up”.  Governor Mark Carney also cast doubt last month about the likelihood of a rate increase if there is a smooth Brexit, citing the slowdown in the global economy.

However, just as the MPC appears to be warming up to the idea of a rate cut, markets have pared back their bets of looser monetary policy, in line with expectations for other central banks, due to the easing in trade tensions during October. Investors are currently pricing a 70% probability of a 25-basis points rate cut by December 2020, although if the Bank was to perform a dovish pivot, a rate reduction would probably arrive before then. 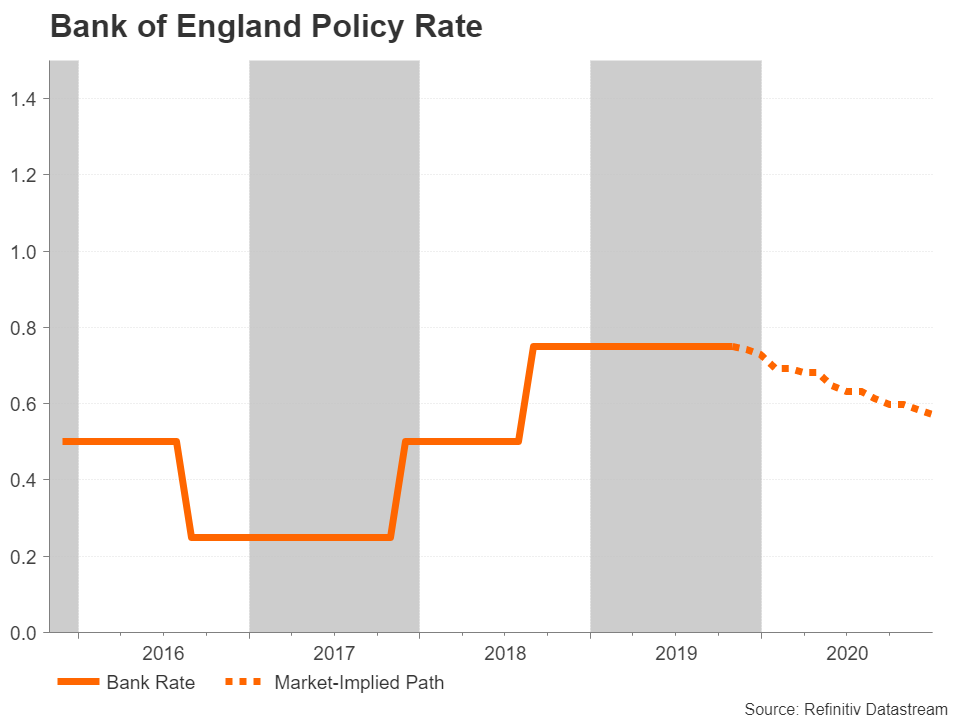 The Bank Rate has stood at 0.75% since August 2018 and the BoE is widely anticipated to hold it there in November. The Bank will also be publishing its quarterly Inflation Report on Thursday so a reassessment of the economic outlook could prompt a rethink about its existing policy stance.

But even if policymakers were to put a rate cut on the table, would they necessarily take off a rate hike? The BoE may well decide to keep all options open given that the current gloom could easily start to lift early next year if Brexit proceeds on January 31 with a deal and monetary stimulus elsewhere starts to kick in, boosting global growth.

BoE meeting may not prove decisive enough for pound

The lack of a clear policy direction could leave investors underwhelmed, relying instead on Brexit and election headlines for their cues. The pound is currently trading not too far from its October peaks when it briefly topped the $1.30 level. Should the Bank make a convincing dovish shift, pound/dollar could soon be testing the 61.8% Fibonacci retracement of the March-September downtrend at $1.2838. Slipping below this support would open the way for the 38.2% Fibonacci at just above $1.25 where the 50-day moving average also stands, making it a crucial barrier in preventing a return to a bearish bias.

Alternatively, if policymakers indicate that a rate increase is still more likely than a cut, the bulls could next target the 78.6% Fibonacci at $1.3078.

It’s quite possible, however, that the reaction to the BoE’s decision this week may not be very dramatic as traders might prefer to wait for the outcome of the snap general election on December 12 before adjusting their positions substantially.