Amazon is set to unveil its financial results for the first quarter of 2022 on Thursday, April 28, after Wall Street closes. The world’s biggest online retailer is expected to face an extremely tough year-on-year comparison as its e-commerce business has been experiencing a sustained slowdown since the global reopening of economies. Nevertheless, Amazon’s cloud and advertising segments are anticipated to increase both their profitability and market share. The consensus recommendation from Refinitiv analysts remains ‘buy’, indicating that its secondary services could not only compensate for the retail business losses but could also have significant growth prospects.

Amazon faces multiple near-term obstacles that cloud its outlook. Firstly, the ongoing monetary tightening has proved to be a double-edged sword for the retail and tech giant. On the one hand, rising interest rates hurt the firm’s valuation by reducing its future cash flows, which is significantly negative for tech companies whose valuations rely heavily on their growth prospects. On the other hand, as the era of ‘cheap money’ comes to an end, consumer spending has been constantly decreasing, leading to lower revenue for the firm’s retail business.

Apart from that, persistent inflationary pressures continue to trim the company’s profitability. Specifically, rising prices have not only narrowed Amazon’s profit margins but are also discouraging people from spending their disposable income on non-essential shopping. In the past quarter, the average consumer has seen his energy bills going through the roof, alongside food prices and rents. Therefore, considering the continuously increasing cost of living and the broader economic uncertainty, people prefer to play defense, curtailing their retail spending.

To make matters worse, the renewed lockdowns in China pose a further downside risk. The company faces increased costs due to supply chain disruptions as well as supply shortages in semiconductors and other tech gadgets because many factories in China have temporarily paused their operations. Aside from rising transportation costs, the congestion in Chinese harbors and the new wave of supply bottlenecks are delaying or even canceling deliveries, resulting in dissatisfied customers that are terminating their Amazon prime subscriptions. Considering what happened to Netflix and Meta, when they recorded a decline in subscribers for the first time in their history, Amazon subscriber figures will be closely eyed in the upcoming report. 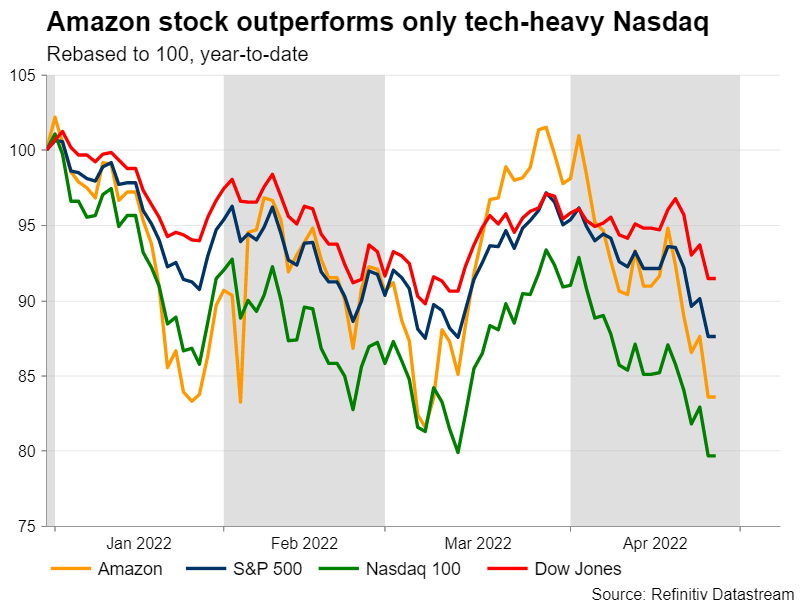 AWS comes to the rescue

Lately, Amazon’s Web Services unit has been a cash-generating machine, mainly due to its cloud segment, compensating for the e-commerce unit’s losses. Furthermore, in the last quarter, the company increased the number of its cloud availability zones globally, while it also added new pioneering features. Both these developments are expected to have boosted revenue and suggest that this area could be a real bright spot for the company for many quarters to come.

Additionally, Amazon’s advertising segment is expected to have stolen market share from both Alphabet and Meta, making it the new growth driver for the company as the retail business wanes.

However, hiring and retaining experienced tech professionals has proved to be an expensive task for Amazon, especially in periods when the labor market is tight. Recently, workers in one of its US warehouses voted to unionize for the first time and the prospect that more Amazon’s employees might start forming and joining unions could apply further upside pressure on wages, further trimming the firm’s profitability.

Mixed financial figures are expected for Amazon. The tech behemoth is expected to post revenue of $116 billion for the fourth quarter, according to consensus estimates by Refinitiv IBES, which would represent a year-on-year growth of 7% but a 15% decline from the previous quarter. Additionally, earnings per share (EPS) are estimated to increase from $5.80 in the previous quarter to $8.50, but the figure will decrease 46% on an annual basis.

Despite the recent sell-off and the broader negative environment for tech stocks, Amazon’s valuation remains expensive. The 12-month forward price-to-earnings ratio, which denotes the dollar amount someone would need to invest to receive back one dollar in annual earnings, currently stands at 50.5x. This ratio is not only way higher than S&P 500’s 19.2x but also against heavy-tech Nasdaq’s 27.0x. 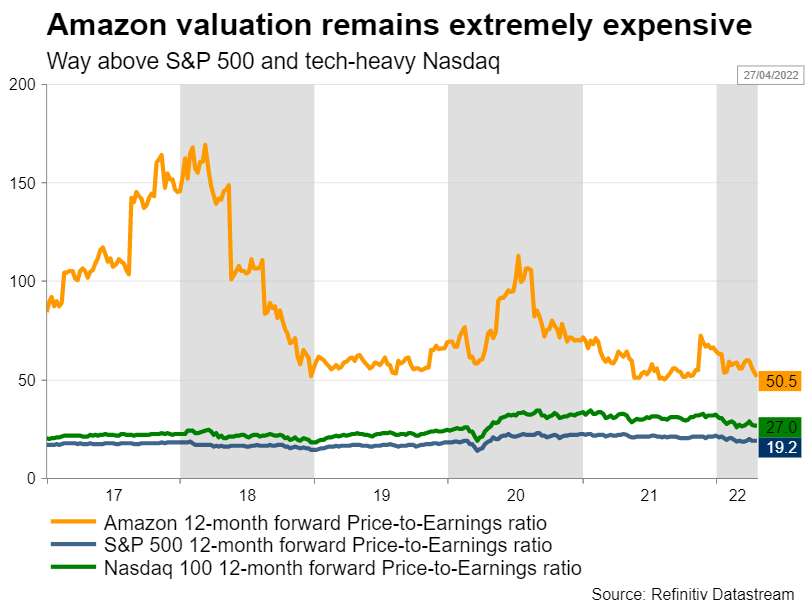 Therefore, it is obvious that investors are betting on Amazon’s significant growth prospects, which could enable it to outperform the markets in the near future. However, it could also be argued that its valuation remains aggressive and a potential negative surprise in the upcoming earnings report could trigger a sharp decline in the share price.

Stock price plummets ahead of earnings

Taking a technical look at Amazon’s share, a negative outlook can be observed as the price has been trending downwards since November. Although it managed to post a partial rebound in late March, the short-term picture has deteriorated again, with the stock diving beneath both its 50- and 200-day simple moving averages.

If earnings disappoint, initial support may be found near the most recent low of $2,785, where a violation would turn the focus towards the $2,675 hurdle.

On the other hand, stronger-than-expected results coupled with strong Q4 guidance could propel the stock towards the $2,995 barricade. If buying interest intensifies further, then the next obstacle could be met at $3,170.