Amazon is set to unveil its financial results for the second quarter of 2022 on Thursday, July 28, after Wall Street closes. The world’s biggest online retailer is expected to face an extremely tough year-on-year comparison as its e-commerce business has been experiencing a sustained slowdown since the global reopening of economies, while persistently high inflation has been hurting consumer spending. Nevertheless, Amazon’s cloud and advertising segments are anticipated to increase both their profitability and market share. The consensus recommendation from Refinitiv analysts remains ‘buy’, indicating that its secondary services could compensate for the retail business losses.Barrage of negative developments undermine Amazon’s post-pandemic performance

Amazon faces multiple near-term obstacles that dim its outlook. Firstly, the ongoing monetary tightening has proved to be extremely disadvantageous for the retail and tech giant. Specifically, rising interest rates hurt the firm’s valuation by reducing the present value of its future cash flows, which is significantly negative for tech companies whose valuations rely heavily on their growth prospects. In addition, as the era of ‘cheap money’ has come to an end and recession fears are mounting, consumer spending has been constantly decreasing, leading to lower revenue for the firm’s retail business.

Apart from that, persistent inflationary pressures, which mostly stem from the supply side, continue to trim the company’s profitability. Specifically, rising prices have not only narrowed Amazon’s profit margins but are also discouraging people from spending their disposable income on non-essential shopping. Since the beginning of 2022, the average consumer has seen his energy bills going through the roof, alongside food prices and rents. Therefore, considering the continuously increasing cost of living and the broader economic uncertainty, people prefer to play defense, curtailing their retail spending. 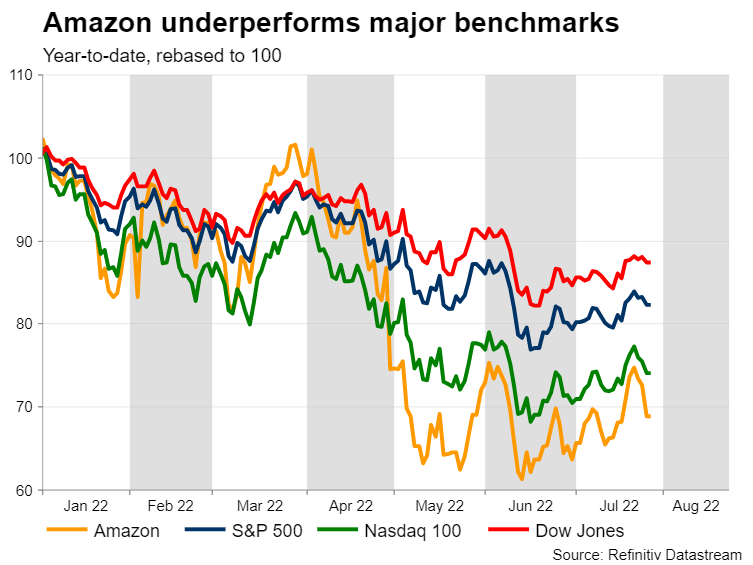 This earnings season has already provided early negative signs for the retail sector. Specifically, Shopify missed both earnings and revenue expectations, indicating that e-commerce growth hasn't materialized in the post-pandemic era, while announcing that it plans to cut 10% of its staff to lower its expenses amid a broader deteriorating outlook. Along the same lines, Walmart downgraded its quarterly and full-year profit guidance after posting disappointing financial figures, noting that inflation is causing shoppers to spend more on necessities and less on leisure items.

Moreover, another development that investors should be aware of is the shift of the annual Prime Day event from the second quarter to the third quarter in this year.

Lately, Amazon’s Web Services unit has been a cash-generating machine, mainly due to its cloud and digital advertising segments, compensating for the e-commerce unit’s losses. However, both of these business units are likely to face difficulties as tech giants have already stated in this earnings season that customers and enterprises have been reducing their spending on online features in the face of an upcoming recession. Therefore, AWS performance could be a catalyst that saves the day for Amazon for this quarter, if it demonstrates resilience.

Mixed financial figures are expected for Amazon. The e-commerce giant is expected to post revenue of $119 billion for the second quarter according to consensus estimates by Refinitiv IBES, which would represent year-on-year growth of 5.3%. Additionally, earnings per share (EPS) are estimated to decrease from $0.37 in the previous quarter to $0.17, which would mark a massive 82.2% decrease on an annual basis. It should be noted that the EPS figure is expected to be so low due to the execution of  a 20-for-1 stock split in June.

Despite the recent sell-off and the broader negative environment for tech stocks, Amazon’s valuation remains extremely expensive. The 12-month forward price-to-earnings ratio, which denotes the dollar amount someone would need to invest to receive back one dollar in annual earnings, currently stands at 66.8x. This ratio is not only way higher than S&P 500’s 16.7x but also against tech-heavy Nasdaq’s 23.7x. 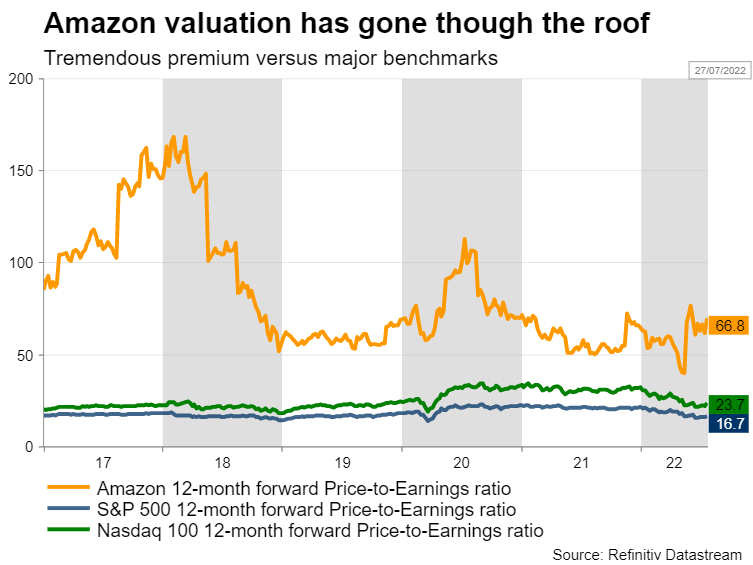 Therefore, it is obvious that investors are betting on Amazon’s significant growth prospects, which could enable it to outperform the markets in the long term. However, it could also be argued that its valuation remains aggressive and a potential negative surprise in the upcoming earnings report could trigger a sharp decline in the share price as the current premium seems to not be justified by fundamentals.

Taking a technical look at Amazon’s share, a negative outlook can be observed as the price has been trending downwards since November. Although the price has managed to cease its decline and is trading within a range in the past three months, it has a long way to go until it reverses its downfall.

Therefore, if earnings disappoint, initial support may be found near the 50-day simple moving average (SMA), currently at $113.00. Sliding beneath that floor, the price could descend towards the 2022 low of $101.00, a level which it has failed to cross below twice in recent months.

On the other hand, stronger-than-expected results coupled with strong Q3 guidance could propel the stock towards the recent peak of $125.00. Conquering this barricade, the bulls could then aim for the $134.00 region.