Amazon is set to unveil its fourth-quarter financial results on Thursday after Wall Street’s closing bell. The world’s biggest online retailer is going to measure up to a tough year-ago comparison when revenue was surging due to global Covid-19 restrictions, while lately the upcoming monetary tightening by the Fed has negatively impacted its stock price. Although deterioration in the company’s financial figures is expected, the consensus recommendation from Refinitiv analysts is ‘buy’, indicating strong growth prospects for the firm.Amazon had a challenging 2021 but 2022 does not seem better

Amazon experienced significant growth in 2020 with pandemic-driven tailwinds turbocharging both its revenue and earnings as investors were heavily relying on online shopping. However, 2021 has turned out to be much more of a challenge on several levels, resulting in the stock’s underperformance. Especially in the last quarter, the e-commerce leader is facing tough year-on-year comparisons as the pandemic was raging in the same quarter last year, while Omicron-related jitters seem to have severely weighed on its profit margins. 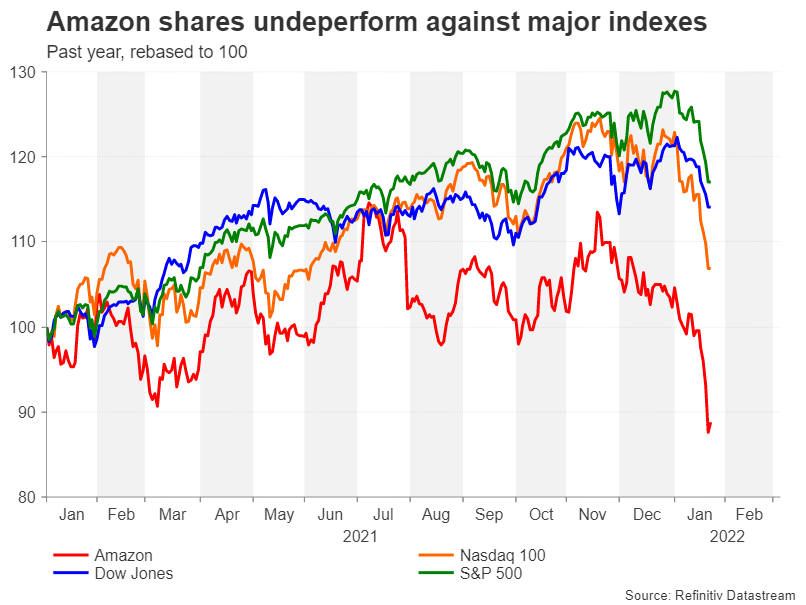 To make matters worse, Amazon has been underperforming since the beginning of 2022, when the Fed indicated that it will begin raising interest rates as soon as March. Rising interest rates can discourage consumer spending and cause companies to borrow less, which can both inflict damage on Amazon’s retail service growth. Moreover, Amazon is also considered a tech firm whose performance heavily depends on its growth prospects. Hence, higher interest rates can wreak havoc on the firm’s valuation as they reduce the value of its future cash flows.

In Q4 the online retail behemoth has incurred substantial additional costs which have deteriorated the firm’s financial performance. Firstly, the shortage of available workers forced the company to hike wages and provide extra benefits to lure new workers. Furthermore, the firm was forced to pay elevated freight and shipping costs as supply chains worsened due to the Omicron outbreak. In addition, raw material prices soared due to surging inflation, further narrowing the company’s profit margins. However, despite the aforementioned headwinds, Amazon managed to keep its prices at the same levels, prioritizing consumer’s and selling partner’s satisfaction over short-term gains.

More than an online retailer

The company has launched many new services and features to remain profitable, hold onto its Covid-19 gains, and ultimately keep its shareholders happy. Specifically, Amazon's recently launched cloud segment, Amazon Web Services (AWS), generated $44.4 billion of revenue while operating at a 30% margin during the first nine months of 2021. In addition, the retail behemoth has also created a digital advertising segment, which has slowly gained market share from Google and Meta, fuelling additional growth for the firm. Finally, the firm is set to open its first physical clothing store clearly indicating the management’s plans to expand in more industries.

Amazon’s financials are expected to reflect a loss of momentum due to the global reopening of economies. The online e-commerce giant is expected to post revenue of $138.35 billion for the fourth quarter according to consensus estimates by Refinitiv IBES, which would represent year-on-year growth of 10%. However, this figure indicates a deceleration in Amazon’s growth as it is the smallest annual increase in the last 4 years. Earnings per share (EPS) are estimated to collapse to $3.84, representing a massive 73% decrease on an annual basis.

Amazon has a stretched valuation with a trailing 12-month price to earnings (P/E) ratio of 70.6 (as of January 25, 2022), which is substantially higher than the retail sector’s average of 16. Moreover, its forward 12-month P/E ratio is currently at 58.3, with most of its major retail and tech competitors reporting a significantly lower figure. 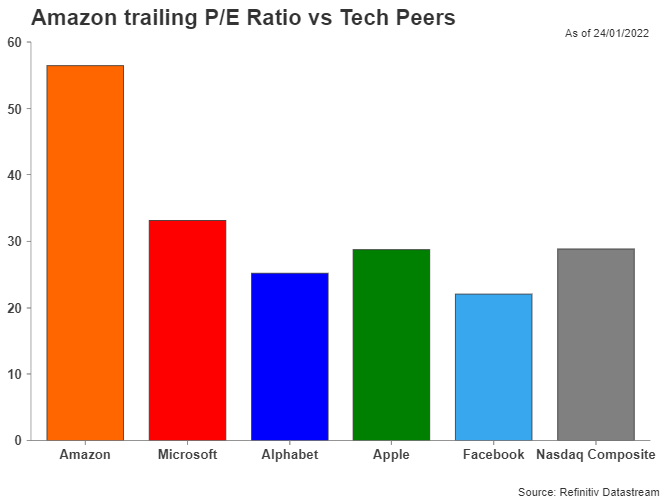 However, Amazon has been reinvesting a significant part of its earnings for the research and development of new products as well as the expansion of its current services, with both moves justifying a higher P/E ratio. Additionally, the inflated P/E ratios might also suggest that markets are factoring in the ability of the company to successfully grow its current businesses, pricing in strong growth for Amazon.

From a technical perspective Amazon stock has been struggling since the beginning of Q4. If earnings disappoint, initial support may be found near the $2,690 region, where a violation would turn the focus towards the $2,250 hurdle.

On the other hand, stronger-than-expected results coupled with encouraging 2022 guidance could propel the stock towards the $3,180 barricade. If buying interest intensifies further, then the next obstacle could be met at $3,550.