With interest rates rising at a stunning clip and the US dollar smashing everything in its path, stock markets are under tremendous selling pressure. Even shares of big tech companies have been caught in this storm. Some of those such as Amazon and Google are becoming attractive at these valuations, while Microsoft and Apple still appear expensive. Tech troubles

When investors refer to big tech, they think of companies such as Apple, Microsoft, Amazon, Google, and Meta Platforms. These titans have grown to dominate their respective industries, have enormous ‘moats’ in the sense that it is difficult for competitors to replicate their products, and their digital nature means the cost of acquiring new clients is very low.

As such, they have generated astonishing returns over the last decade, although their performance this year has been mixed. The problem was the spike in interest rates, which encouraged traders to dial back their risk-taking behavior, compressing the valuations on riskier assets. 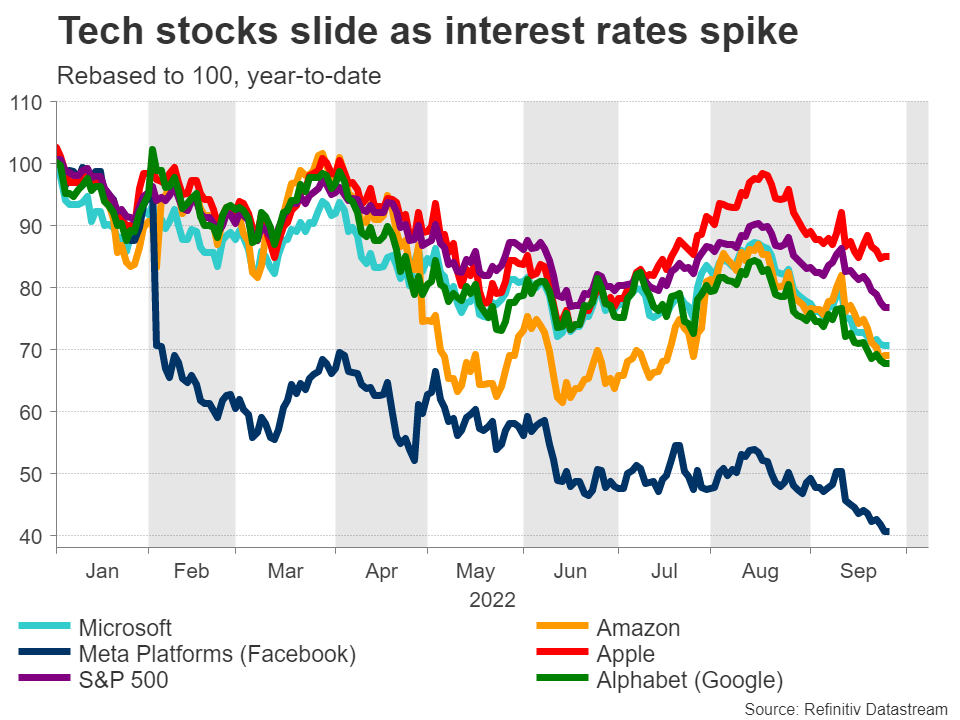 That sparked a selloff in equity markets and an appreciating US dollar added fuel to the fire. Since these companies generate around half of their sales outside of America, a stronger dollar can have a huge impact by making the services they sell more expensive for foreign consumers.

Leading the decline was Meta Platforms, the parent company of Facebook and Instagram. Shares are down almost 60% this year, imploding on concerns that user growth is stagnating and competition is intensifying with TikTok bursting into the scene.

Meta makes its money mainly through advertising but because of some privacy changes from Apple, its ads have lost their ability to target users effectively, decreasing demand for those ads.

Most importantly, the company is investing heavily into building the Metaverse, which is seen as a colossal risk. Investors are worried CEO Mark Zuckerberg is pouring endless amounts of capital down a rabbit hole that may never generate any returns. 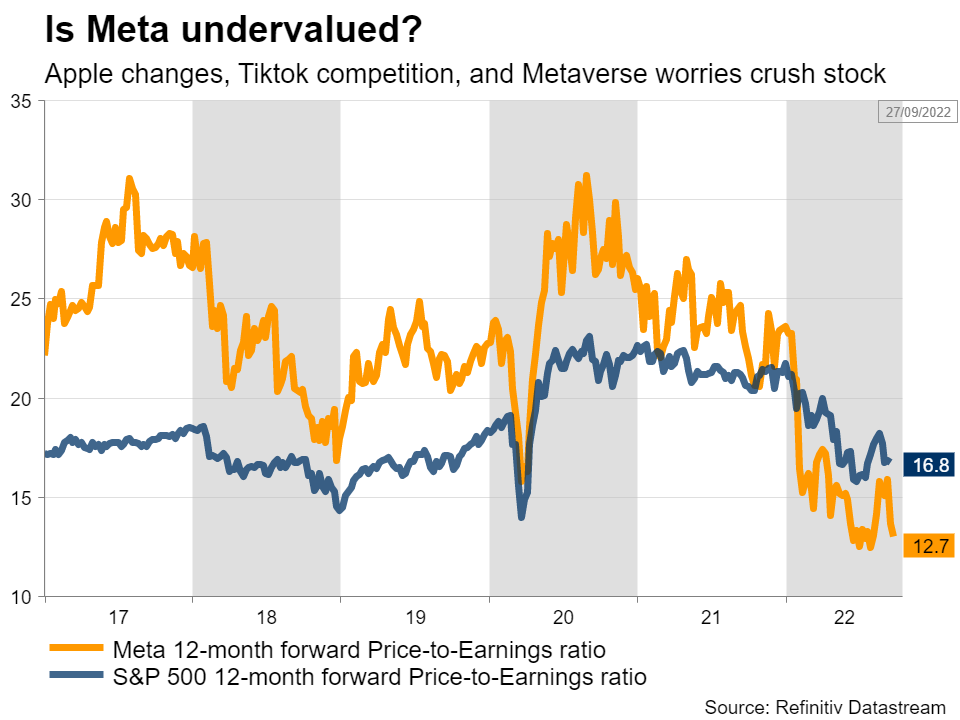 The good news is that the valuation is attractive. Meta shares are currently trading at 12.7 times forward earnings, which is 25% cheaper than the market. If management curtails spending on unpopular investments and manages to recalibrate its ads, this could be a turnaround story.

That said, the chart is still ugly. Meta shares are currently testing their covid lows and if they slice below this region, investors might have an opportunity to buy even cheaper shares near the 2018 bottom.

Amazon commands the most expensive valuation in this list, but only looking at that is misleading. After the pandemic, Amazon went on an investment rampage in order to expand its warehouse infrastructure and ensure that its cloud services division can keep expanding.

These investments caused free cash flow to evaporate and made the valuation appear horrible at first glance. Yet they will pay dividends down the road. Investors understand that Amazon can turn on the profits switch whenever it wants, simply by cutting back on spending. 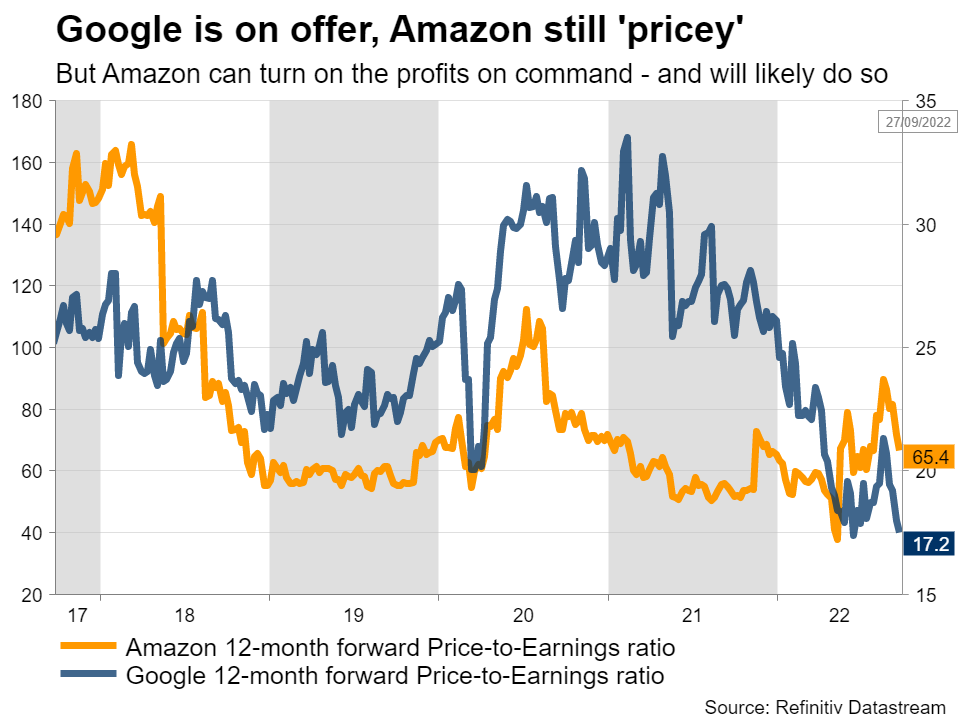 Google is a different beast. At 17.2x forward earnings, the valuation is already quite appealing and the real number is even lower since the company holds around 10% of its market cap as cash sitting on its balance sheet.

While its bread and butter is still advertising, it is also one of the big three players in the cloud sector alongside Amazon and Microsoft. Considering that we are still in the early stages of cloud adoption, this could ensure solid growth for years.

Finally, both Microsoft and Apple appear expensive. In terms of earnings per share, Microsoft is trading at a 33% premium to the S&P 500, which increases to almost 40% for Apple.

To be fair, quality companies usually enjoy a higher valuation than the overall market. They both have share buyback programs and strong growth drivers, with Microsoft leading the charge in cloud and Apple preparing to get into virtual reality.

Still, a premium valuation requires premium growth, which hasn’t been the case lately. In the latest quarter, Microsoft grew its earnings by only 2% from a year ago, while Apple’s earnings fell by almost 8%. That’s before accounting for inflation, so the real losses were even greater. 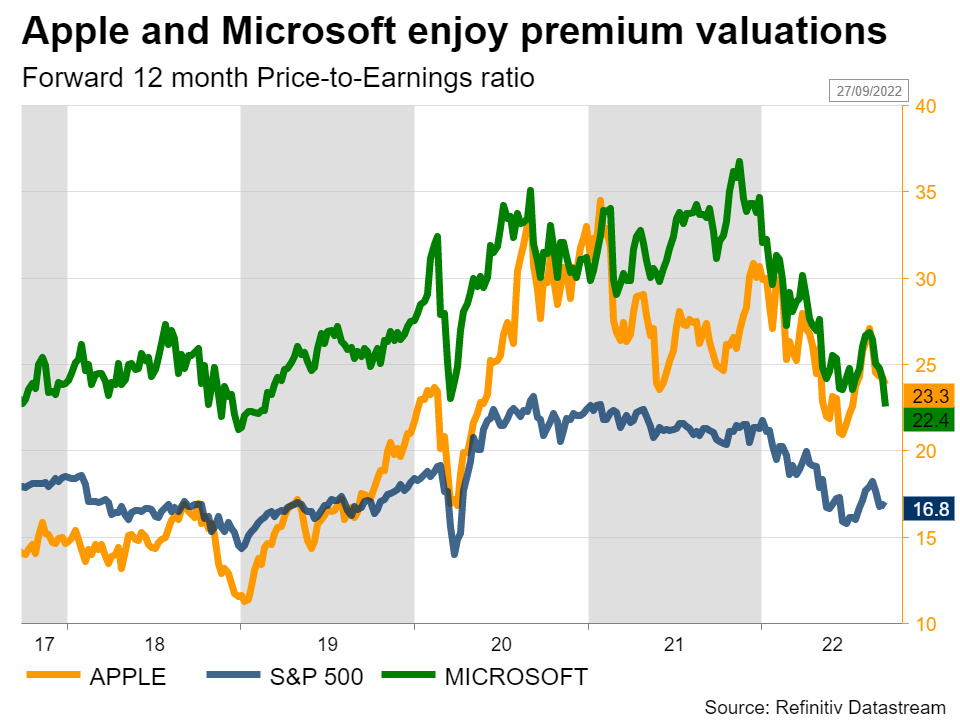 If the lackluster performance continues, this premium might not persist for long. With Apple the risks are even greater considering its exposure to the Chinese economy, which is dealing with a property crisis.

All told, this is a tough environment for stocks. The economic data pulse is slowing, interest rates are rising, and valuations are still not cheap. That said, Amazon and Google are worth a second look if the market drops further, while Microsoft and Apple appear too expensive in the absence of growth.