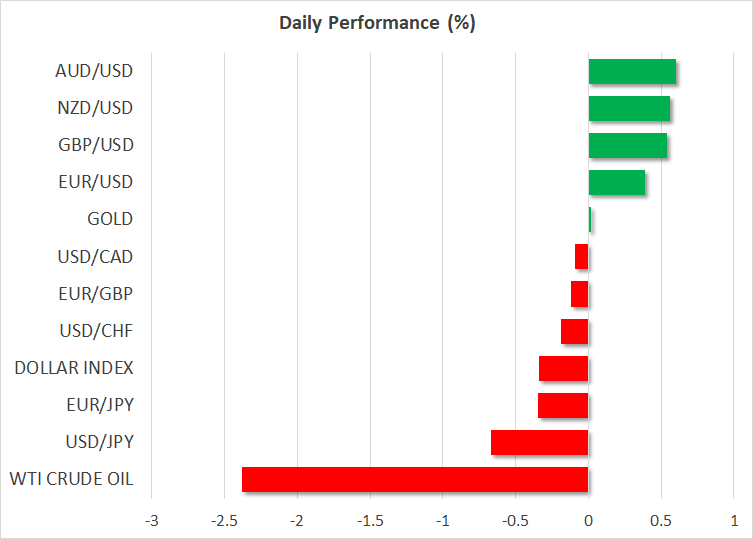 The US dollar has started August on the backfoot as markets are increasingly convinced that the Federal Reserve’s rate hike days are numbered, while Wall Street has just notched up its best month since November 2020, cheered by more upbeat earnings.

We seem to have entered a precarious period of conflicting economic indicators when it comes to the US economy, with one set of data signalling a recession and another pointing to robust spending by consumers.

Days after the US GDP report put the economy into a technical recession, personal consumption was shown to have jumped by a solid 1.1% in June. More worryingly, the Fed’s favourite inflation gauge – the core PCE price index - ticked up slightly in June for the first time in four months.

Yet, traders don’t appear to be struggling that much navigating through the volatile data as their primary fixation is how high the Fed funds rate will go and how quickly it will get there. The dollar was on the verge of erasing its weekly losses on Friday following the stronger-than-expected spending and PCE inflation numbers, but its chances were scuppered by soft inflation expectation readings.

Consumers’ expectation of inflation in five years was revised up slightly to 2.9% in July’s final estimate, but the fact that this was below the prior month’s 3.1% level was all that markets needed to revive bets that price pressures are easing.

Receding expectations about aggressive rate hikes continuing into 2023 have spurred a rally in government bonds, devastating yields, and last week’s FOMC meeting and data out of the US only reinforced this trend.

Investors run the risk of reading too much into Powell’s somewhat toned down hawkish rhetoric last week and have brushed off hawkish remarks by the Fed’s most dovish policymaker, Neel Kashkari, on Sunday, likely because he is not a voting FOMC member this year.

Fed officials will slowly be returning to the public speaking circuit this week and today’s ISM manufacturing PMI will kick off another crucial week for US economic releases, the highlight of which will be Friday’s jobs report.

In equity markets, there were few signs of caution about how Fed speakers and the upcoming data might affect the narrative as generally impressive earnings results in both America and Europe gave the bulls the upper hand, while the retreat in yields provided additional support.

The S&P 500 rallied by 9.1% in July and the Nasdaq Composite surged by more than 12%. Earnings from Apple and Amazon.com capped a not-so-disastrous earnings season for the Big Tech, with the latter shooting 10% higher on Friday.

Record profits by the energy giants, Exxon Mobil and Chevron, also boosted the broader indices and European markets are climbing on the first trading day of August. Even stocks in Asia are mostly positive today, shrugging off recession fears amid a sluggish economic rebound in China.

Weaker manufacturing PMIs in China, Japan and South Korea have raised fresh question marks about the growth outlook, especially as Chinese policymakers do not appear too enthusiastic about splashing out more money to shore up the economy. But for now, the brighter mood on Wall Street is certainly helping.

Risk-sensitive currencies such as the pound and the Australian dollar also benefited from the improved sentiment, though it is hard to determine what extent of their gains is down to risk appetite and how much of it is being driven by the pullback in the US dollar.

The yen is broadly firmer today, rising against most of its major peers. Whilst the drop in bond yields and subsequent narrowing of spreads is clearly increasing the yen’s relative appeal, there could also be some safe-haven flows stemming from recession risks that’s adding to the yen’s upside. Not to mention some geopolitical tensions, as US House speaker Nancy Pelosi starts a tour of Asian countries on Monday and may include a stopover to Taiwan to her itinerary, something that’s sure to anger Beijing.

The greenback was last approaching the 132-yen level, while the euro advanced to $1.0250, having perked up somewhat after Friday’s better-than-expected GDP figures out of the Eurozone. The pound extended its gains to $1.2240 and the aussie was attempting to reclaim the $0.70 handle ahead of the RBA’s policy decision early on Tuesday.