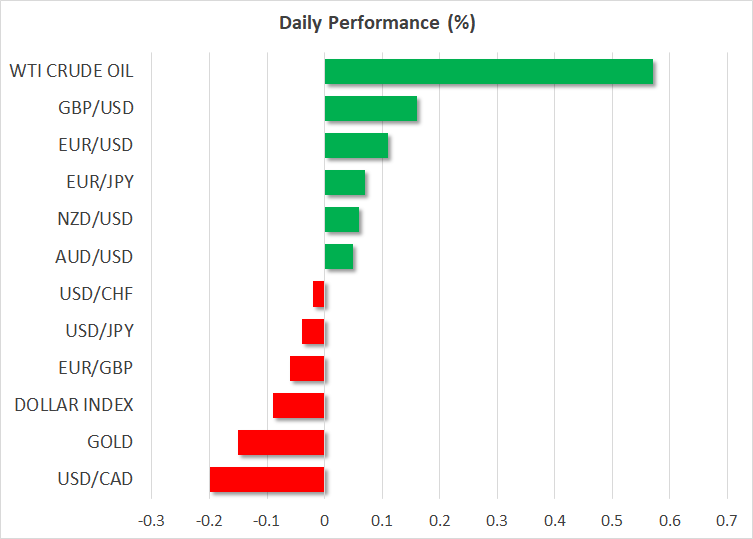 US yield curve flattens: sign of confidence or trouble?

Government bond yields took an unexpected dive on Tuesday as a combination of strong auction demand, safe-haven flows and easing inflation worries boosted the bond market. The yield on 10-year US Treasuries slumped to a one-month low, hitting 1.513%. The 30-year yield also fell sharply and Eurozone, Australian and Japanese yields are some of the other notable movers. In the US, key parts of the Treasury curve – the spread between 10-year and 3-month notes and 10- and 2-year notes – were the flattest since March today.

A flattening yield curve is typically associated with weakening growth and inflation expectations, but ebbing inflation jitters are likely to be the main factor behind this pullback, which began in late March. The US yield curve steepened substantially once all the pandemic stimulus started flooding in and this is the first major retreat in this part of the curve since last summer.

But as more and more data has come rolling in, markets have slowly been aligning their views with the Fed’s, which is that there is no reason at this point to think the current surge in inflation won’t be temporary.

That notion will be put to the test tomorrow when the latest CPI numbers are due in America, but for now, investors are more relaxed about the prospect that the major central banks won’t be in a hurry to withdraw all the stimulus.

US stocks outperform, with a little help from falling yields

The decline in Treasury yields have been a boon for many of Wall Street’s popular tech and growth stocks. Lower yields are just about the only thing justifying all the bloated valuations that ballooned from the injection of stimulus cash. Moreover, they are behind the Nasdaq’s latest rebound.

The Nasdaq Composite outperformed again on Tuesday, closing 0.3% higher, while the S&P 500 ended the day flat. Nasdaq futures are also leading the US market today.

However, stocks elsewhere around the world were mostly in the red on Wednesday and markets have generally been suffering from a lack of direction all week.

Yesterday’s internet outage that affected several news and government websites was cited as sparking some risk-off trades and that may have dampened the mood slightly, as well as exacerbated the inflows into bonds.

With the buying spree for sovereign bonds looking somewhat overdone, there’s a danger of a sharp reversal in the coming days, especially as the ECB meeting and US CPI data are coming up tomorrow.

All calm in FX markets, pound and loonie breathe some life

A spike in yields might resuscitate the US dollar, which has been drifting aimlessly in the past couple of days. The greenback barely flickered from yesterday’s record jump in US job openings in April that indicated the recent soft payrolls numbers were down to Americans unwilling to go back to work rather than because of a weak labour market.

The euro has also been stuck in a tight range this week and was last trading at $1.2185. The ECB is expected to stick to its dovish script when it announces its latest policy decision on Thursday, so the near-term prospects of euro/dollar breaking above $1.22 are low at the moment.

In contrast, the Bank of England appears more confident that the British economy will recover strongly and Chief Economist Andy Haldane hinted at “turning off the tap” for monetary policy support earlier today. The pound edged up to $1.4180 after his remarks, making it the best performer in the European session.

The Canadian dollar wasn’t far behind, however, firming to around C$1.2090 to the US dollar as investors anticipate the Bank of Canada also sounding upbeat about the Canadian economy when it announces its policy decision later today at 14:00 GMT.

View All
XM Research - 57 minutes ago