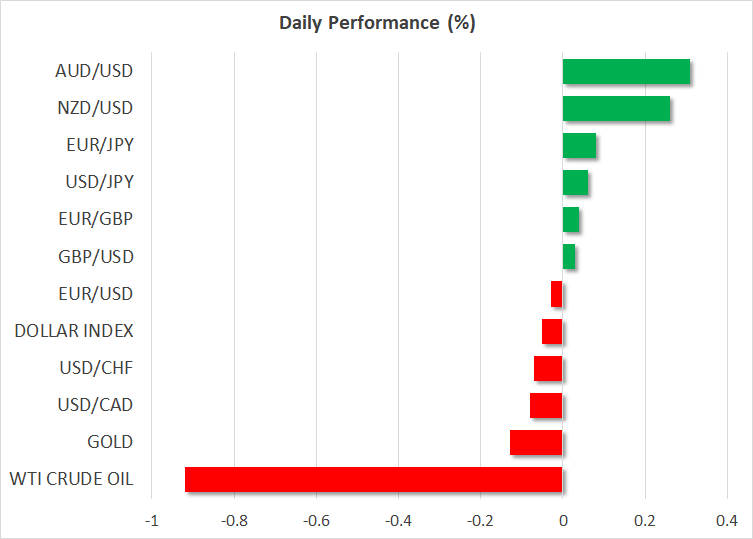 Subdued start to week amid caution

It was a relatively subdued start to the week across financial markets on Monday as stocks, bonds and the dollar were still reeling from last week’s US CPI shock. The panic and fallout from the jump in US inflation to a three-decade high have subsided a little as the Fed is not seen to be changing course just yet. Comments over the weekend by Minneapolis Fed President Neel Kashkari that there was no need to “overreact to some of these temporary factors” soothed fears that the Fed might accelerate its tapering timetable.

With a raft of other Fed officials scheduled to speak this week, investors will be on the lookout for any shifts in the transitory narrative following the latest inflation scare.

Wall Street skidded while Treasury yields shot up, propelling the greenback to 16-month highs, as US CPI hit 6.2%. The S&P 500 and Nasdaq Composite have since posted a decent rebound and bond yields appear to be retreating slightly, but there’s still the October retail sales report on Tuesday to get through.

After decelerating in Q3, the US economy is gaining momentum again, with a pickup in vaccination rates supporting the positive picture even as many other countries are seeing fresh spikes in virus cases. The Fed is less likely to remain patient should growth outperform expectations in the next few months.

Mood in equities may be brightening as Biden-Xi meeting eyed

US stock futures were last trading marginally higher and European shares also firmed after a wobbly start. In Asia, the region’s major indices managed to reverse earlier losses to end the session higher, with the exception of Chinese stocks.

China posted stronger-than-expected growth in industrial output and retail sales in October, which seem to have come as a relief as the data had been falling short of estimates in recent months. But although this lifted the mood slightly globally, concerns about China’s highly over-leveraged property sector are still weighing on domestic investors’ minds.

New home prices fell for the second straight month in October in data published earlier today, amid the downturn in the real estate industry as authorities try to rein in borrowing in the sector.

Meanwhile, tensions with the United States over Taiwan have resurfaced lately, adding to the importance of today’s virtual summit between President Joe Biden and President Xi Jinping. For the markets, however, the main focus will be on whether the two leaders can find enough common ground to pave the way for a reduction in some of the Trump-era tariffs.

With Biden under pressure to tackle the soaring cost of living in the US, some development on the tariff front cannot be ruled out. Though, the fact that he just signed into law fresh sanctions on China’s tech giants, Huawei and ZTE, doesn’t exactly send very positive signals.

Risky currencies extend rebound as dollar on the backfoot

In the FX sphere, the dollar index eased back towards the 95 level but remained stable as the euro and pound struggled to regain positive traction after last week’s tumbles. Reports that the UK and EU may yet be able to work out a solution to the problematic Northern Ireland protocol have boosted sterling versus the euro, but against the greenback, it’s all about yield differentials. UK and Eurozone yields have fallen back quite substantially during November but the same cannot be said for Canadian, Australian and New Zealand yields.

The aussie and kiwi are both extending their rebound versus their US counterpart, though the loonie lagged as oil prices slipped further on Monday.

The yen was under pressure after GDP data showed the Japanese economy shrunk more than expected in the third quarter.

Gold, meanwhile, held not too far from last week’s five-month highs as the precious metal continues to draw interest for its revived status as an inflation hedge.