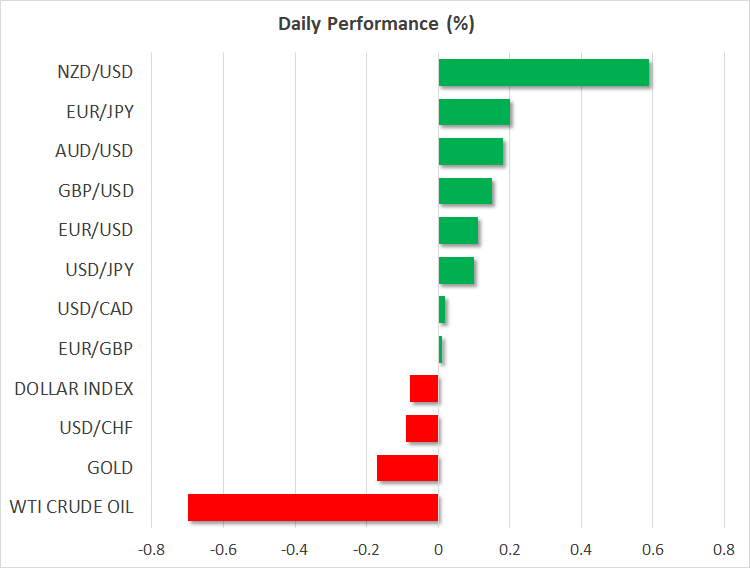 Jitters about how further spikes in inflation might begin to hurt corporate earnings as well as spur the Federal Reserve to hasten its tapering timetable weighed on Wall Street on Wednesday. With signs that consumer spending in the US is ramping up and simmering price pressures are far from cooling down, investors are nervous the Fed will take its foot off the gas a little faster than it currently plans to.

The S&P 500 and Nasdaq Composite closed about 0.3% lower yesterday, while the Dow Jones fell by a steeper 0.6%. The losses came despite an impressive set of earnings by America’s retail giants this week. There is a growing concern that the ongoing broad-based supply constraints and soaring input costs will dampen earnings in the upcoming quarters even as many businesses appear to have grappled well with those challenges in Q3.

However, there’s been no hint from the Fed that it’s even considering altering course on tapering and the real debate is around the timing of liftoff and how many rate hikes would follow after that. Markets are likely just anxious given the uncertain inflation outlook and Wall Street futures are back in positive territory today.

Retailers will stay in the spotlight for the rest of the week, with Macy’s and JD.com due to report their results before the market open.

Elsewhere, tech stocks were under pressure in Hong Kong on worries about slowing earnings and further regulatory crackdowns by Chinese authorities. However, stocks in Tokyo were lifted from reports that the Japanese government’s next stimulus package will be much bigger than expected. In Europe, shares were mostly higher, eyeing fresh record highs.

The recent plunge in the euro is likely aiding the buoyant mood in European equity markets. The single currency is down more than 7% versus the US dollar in the year-to-date, having slipped 2% so far in November alone. However, the selloff appears to have eased overnight and the euro has rebounded slightly from yesterday’s 16-month low of $1.1262 to climb back above $1.13.

The pound, meanwhile, is extending its steady recovery from last week’s lows, currently testing the $1.35 level, as investors grow more confident that the Bank of England will hike rates in December. Against the euro, sterling brushed a fresh 21-month peak of 0.8381 earlier in the session.

However, today’s biggest gainer is the New Zealand dollar, which jumped around 0.6% after the RBNZ’s quarterly business survey indicated inflation expectations by firms are sharply on the up. Both one- and two-year inflation expectations headed higher, with the former reaching an 11-year high, bolstering expectations that the RBNZ might raise rates by 50 bps at its policy meeting next week.

The greenback was softer but steady, edging marginally lower against a basket of currencies. The dollar’s ascent appears to be fizzling out as Treasury yields stepped back from their recent highs.

By far the biggest loser on Thursday was the Turkish lira, which continues to plummet across the board, hitting a new all-time low of 10.9785 against the dollar.

Turkey’s central bank is widely expected to slash interest rates again later today when it announces its policy decision at 11:00 GMT. President Erdogan left investors in doubt that a big rate cut is forthcoming after pledging yesterday to take his fight against high interest rates “to the end”.

In commodities, gold was struggling to break past resistance around $1,870/oz even as yields and the dollar pulled back.

Crude oil prices were headed south as well amid a push by Washington to get other countries on board with its plan to release oil from the strategic reserves. President Biden has reportedly asked China, Japan, India and South Korea to tap into their reserves to ease the energy crisis after OPEC refused to boost its supply. Although no decision has been made, China seems willing to join the US in coordinated action to relieve the pressure on soaring fuel prices.