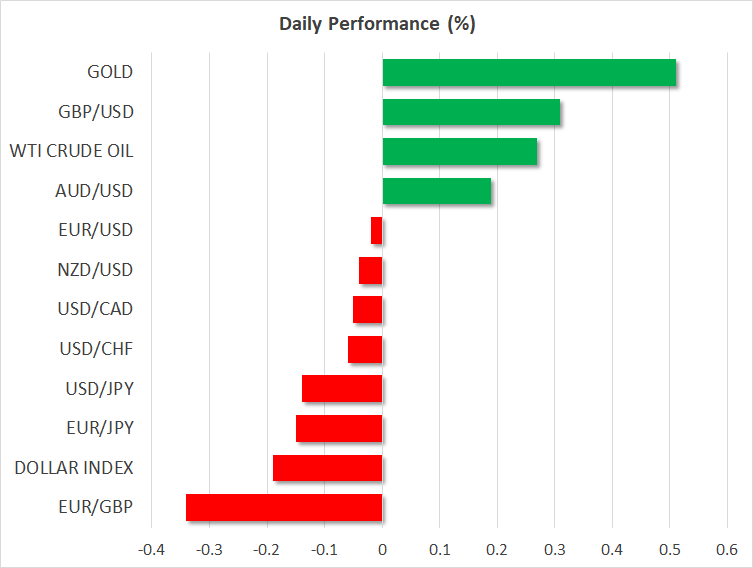 The US dollar slipped further on Thursday, slumping to fresh 31-month lows against a basket of currencies, as investors dumped the world’s reserve currency in the face of increased optimism about the global economic outlook. Following the vaccine breakthroughs, governments around the world have started to prepare for the mass immunization of their populations against COVID-19, with the United Kingdom set to begin vaccinations as early as next week after becoming the first Western country to approve a vaccine.

However, despite warnings that it will take several months before inoculation programmes can be rolled out to the masses given production and logistical challenges, not to mention doubts about whether the vaccines will actually prevent infection, investors are unfazed about riding through the winter virus storm before reaching the end of the tunnel. After all, markets believe they can always count on more stimulus to smoothen the ride.

Hopes are high that Republicans and Democrats can negotiate a new virus relief bill before Congress adjourns in mid-December. The Democrats have agreed to use the $908 billion stimulus plan put forward by a bipartisan team as a foundation for reviving talks, though it’s unclear whether Senate Republicans will accept.

It’s also not certain whether the Federal Reserve will inject more monetary stimulus when it meets in less than two weeks’ time so the dollar could be in line for an upside correction if neither materialize. For now, though, the immediate-term risks for the greenback are heavily skewed to the downside.

Equities had a mixed start to the day as much of the vaccine optimism appears to have been already priced in and there was little reaction to better-than-expected services PMIs out of Asia and Europe. Instead, caution amid doubts about the US recovery held back stocks on Thursday. The ADP employment number fell short of expectations yesterday, pointing to a potential miss in Friday’s official jobs report due in the United States.

In addition, the virus data in the country is getting grimmer with record hospitalizations and soaring death rates. The spiralling infection rate forced the city of Los Angeles to announce a stay-at-home order, casting a further shadow over the near-term outlook.

However, after opening in the red, the Dow Jones Industrial Average and S&P 500 managed to notch modest gains yesterday, with only the Nasdaq Composite ending marginally down. Futures were mixed today, matching the mood in Asia and Europe.

Pound up on Brexit hopes as other majors ease from highs

Some pullback was also in order in the FX sphere as the euro stepped back from a 2½-year high of $1.2139 set earlier in the session, while the Canadian and New Zealand dollars struggled to surpass yesterday’s peaks. The pound and Australian dollar fared slightly better, however.

After initially lagging its peers at the start of the week, the aussie jumped to a more than two-year high of $0.7436 today as the yield on 10-year Australian government bonds has surged on the back of robust Q3 data this week. Reports that China is accepting some imports of Australian coal at its ports also lifted the aussie following recent tensions between the two countries.

Meanwhile, increasing signs that a deal on a post-Brexit trade pact could be reached in the coming days pulled cable from yesterday’s lows to back above $1.34 on Thursday. Reports that the European Union is hardening its position out of fear that its lead negotiator, Michel Barnier, may be making too many concessions had triggered a large drop in the pound yesterday, especially against the euro. But the latest headlines suggest the two sides are working hard to conclude the talks in the next few days.

In commodities, oil prices drifted lower as talks resumed between OPEC and non-OPEC countries on whether to extend the output cuts into next year. With many members of the oil alliance unhappy about maintaining deep production cuts, a long extension is looking less and less likely and today’s meeting could be more about how best to gradually increase output.

Nevertheless, the improving demand picture on the back of the vaccine progress is likely to limit a sharp sell-off in oil prices if OPEC+ fail to rollover existing quotas by more than a couple of months.

WTI and Brent crude were last trading down by about 1% but gold was having a better day, benefiting from the dollar’s persistent weakness. Gold prices were on track for a third straight day of gains, recovering strongly from Monday’s 5-month low. 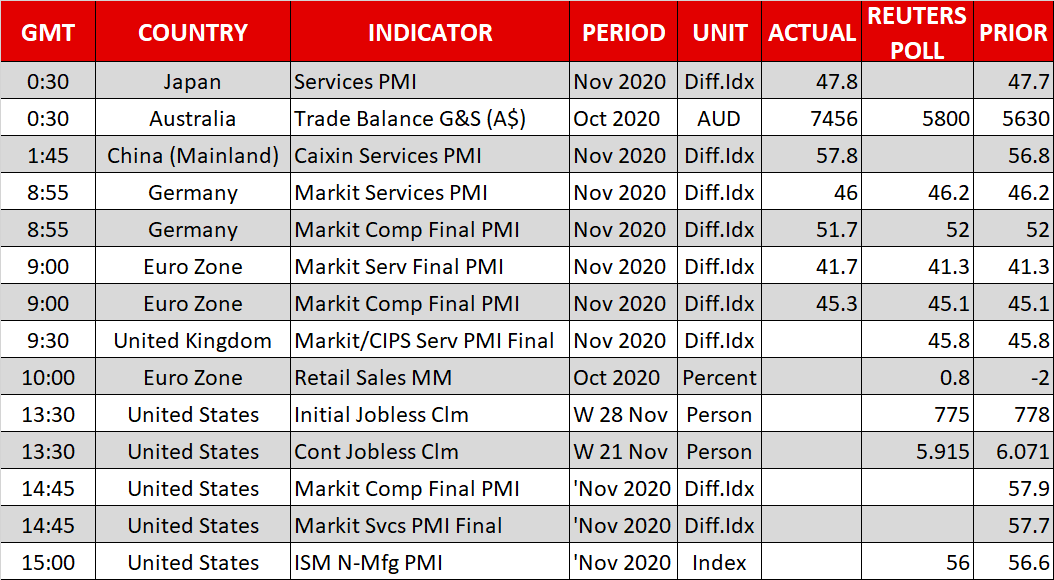