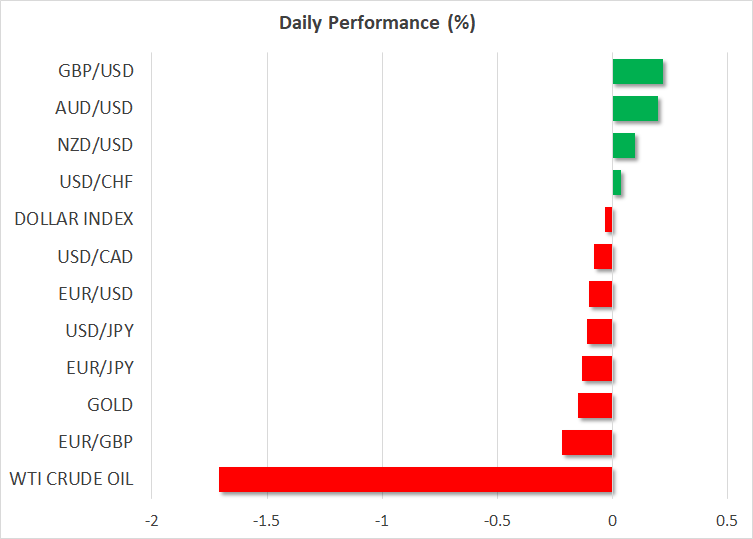 Good times in the United States

The aftershocks of the stellar US employment report are still reverberating across global markets on Monday, as most of Europe and several Asian trading hubs remain closed for holidays. The US economy added an impressive 916k jobs in March, far more than the projected 660k, confirming that the labor market is healing its wounds quickly.

The expedited vaccination program coupled with the $1200 stimulus checks and the re-opening of several states seem to have worked miracles in jump-starting the American economic machine, something also reflected in the booming ISM manufacturing survey.

With almost half of the country having received the first vaccination jab already and much of the spending from Congress still being in the pipeline, it looks like the US economy will enjoy one of its strongest summers ever. The level of federal support that has been unleashed is simply unprecedented, consumers will soon be unchained permanently, and an infrastructure package is coming just for good measure.

All this suggests the recent trend of dollar strength may still have miles left in the tank as America out-recovers Europe and Japan, which have fallen way behind in the immunization race. If the threat of higher corporate taxes wasn't even enough to bruise the greenback, it is difficult to envision what will.

Staying in the FX space, the euro and the yen continue to suffocate in this rising-yield environment. These currencies seem to have turned into the market's favorite 'funding instruments' for carry strategies, whereby investors borrow in a low-yielding regime only to deploy those funds in higher-yielding assets abroad.

Since the Fed is almost certain to raise rates before the ECB or the BoJ, investors are exploiting this two-speed global environment by borrowing in euros and yen and parking those funds in America, profiting from the difference in yields. The Swiss franc is in the same boat, as Switzerland boasts the lowest interest rates globally.

On a more cheerful note, the relentless rally in Wall Street is expected to resume when American traders return to their desks today after the long weekend. Futures suggest the S&P 500 will open around 0.5% higher, which would propel the index to new record heights, thanks to the rosy employment numbers.

But whether this optimism will persist or fade could depend on the upcoming ISM non-manufacturing survey for March. Beyond the headline number, the commentary on price pressures could also be crucial as traders try to decipher how much inflation is going to take off in the coming months.

Markets in London will remain closed today, but there could still be some intrigue in the pound when the Prime Minister announces his roadmap for ending the nation's lockdown at around 16:00 GMT. He is expected to reveal when people will be able to travel abroad for holidays and how quickly non-essential services will reopen.

Britain's success in the vaccination game continues to support the pound, with euro/sterling trading at a new one-year low. Investors increasingly believe the UK and the US will 'return to normal' months before anyone else.

However, there is an underappreciated risk that could come back to haunt the pound later on. If most of the UK is immunized with the Oxford vaccine, which is not particularly effective against the new variants, there's a risk of cases exploding again as Britons travel abroad over the summer. Hence, the US vaccination program might be more 'bulletproof' than the British one.

Finally, the RBA will conclude its policy meeting early on Tuesday. The central bank could attempt to negate the upward pressure on Australian yields by reaffirming its commitment to keeping borrowing costs low, though any major reaction in the aussie seems unlikely.