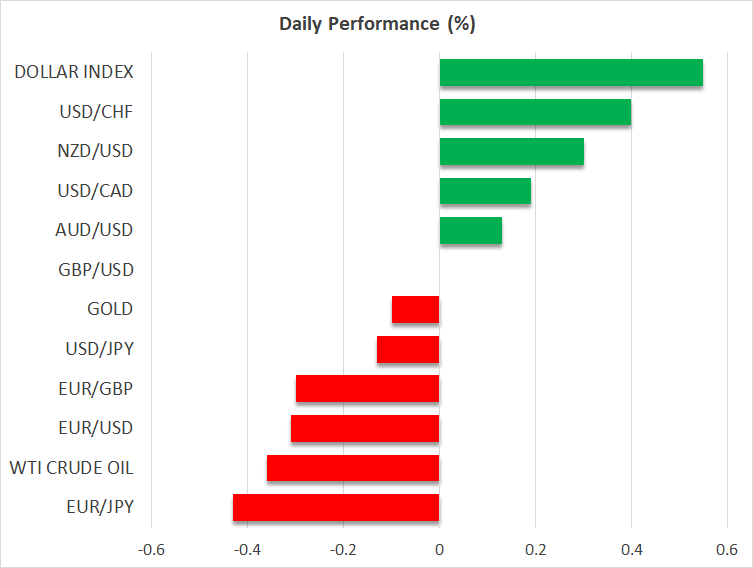 The Fed sent shock waves through financial markets yesterday after it signalled that rates will likely rise faster than previously expected and that a decision to wind down asset purchases may be just around the corner. The dot plot of interest rate projections now envisions two rate hikes in 2023, from zero previously, while a large minority of officials see a move by next year already.

The market reaction was fierce as the hawkish message came like a bolt out of the blue, propelling the dollar much higher and demolishing gold prices. Stock markets struggled as well, although the fallout was contained, signalling that equity traders didn't panic at the first sign that excess liquidity will be drained from the system.

Overall, this was the opening salvo in what is likely to be a long process of policy normalization. Chairman Powell tried to calm some nerves by stressing the Fed won't rush into anything, but it was clear policymakers want to get the taper ball rolling, fearful of overheating the economy and being forced to slam on the brakes even harder later.

Absent some catastrophe in economic data, it seems that a formal tapering announcement in September is now almost locked in, probably after a warning shot at the Jackson Hole economic symposium in late August.

While the decline in equity markets was orderly, the dollar's resurgence was much sharper. The reserve currency stormed higher with force, most likely thanks to a short squeeze. Market positioning was heavily net-short heading into the meeting, forcing several players to cover afterwards.

The question is whether this was an overreaction because of stretched positioning or whether it marks the beginning of a lasting rally. At this stage, the tea leaves point to the latter. The endgame was always going to be a stronger dollar once the Fed got the normalization train rolling, but there was considerable uncertainty about the timing and pace. This decision accelerated the whole process.

Market participants are unlikely to wait until the Fed spells out its tapering plan in August to position for that move. Instead, the most likely outcome now is for a slow grind higher in the dollar over the summer as an exit strategy is baked in, assuming the blessing of economic data of course.

By the same logic, this could be the beginning of the end for gold. Higher yields and a stronger dollar are a recipe for disaster for bullion, which has lost 3% since the Fed decision. This echoes the 2013 tapering cycle, a year when gold lost a whopping 30%. It's unlikely to be as violent this time, although the highs for this cycle might be in already.

Elsewhere, the Swiss National Bank offered nothing new at its meeting today, simply reiterating that rates will remain at the lowest level globally for a long time and that it will continue to intervene in the FX market to weaken the franc.

The focus now turns to the Bank of Japan, which will conclude its own meeting early on Friday. Nothing much is expected there either, with the BoJ also set to reaffirm its ultra-loose stance.

With the SNB and BoJ likely to be the last central banks to raise rates in this cycle, the franc and the yen are prime candidates for losing ground over the coming years as the Fed and others gradually normalize, reviving the theme of monetary policy divergence.

Finally, the aussie and the kiwi are holding up better than most against the almighty dollar today, following some blockbuster data releases from Australia and New Zealand overnight. 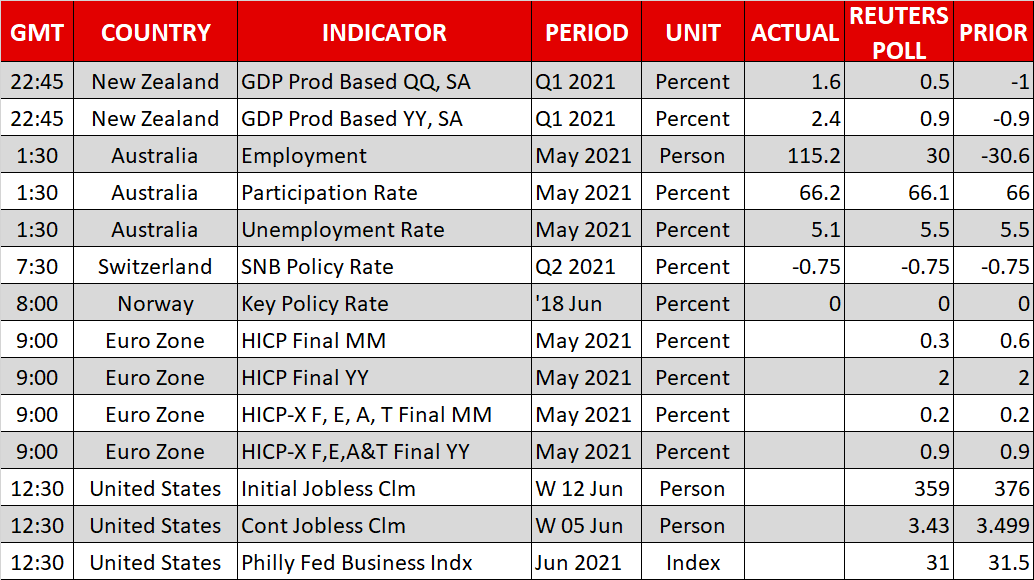