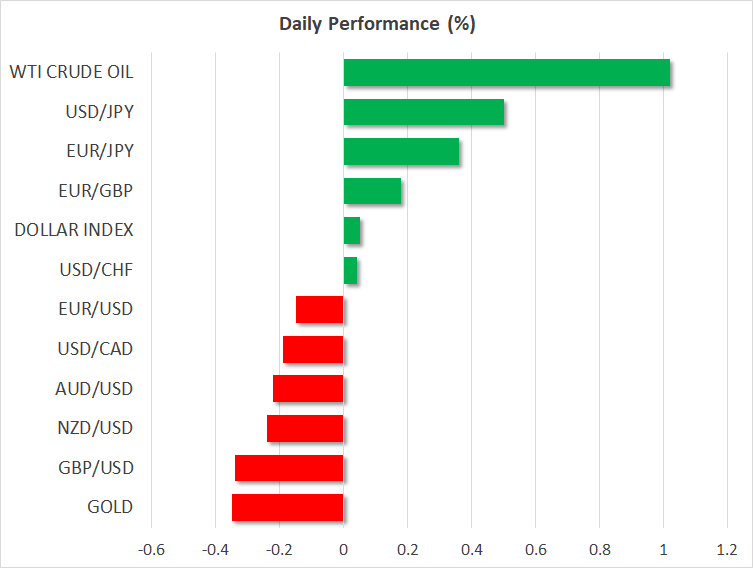 Dollar hit on all sides, but still standing

The implications of the Fed’s latest paradigm shift continue to reverberate through global markets. Investors seem to have taken the signal that inflation will be allowed to ‘run hot’ as credible, judging by the spike higher in market-based inflation expectations, the softer dollar, and the unrelenting rally in equities.

Stocks are a hedge against higher inflation, so it is natural for traders to embrace that asset class even more in a world where inflation might eat away at the returns of other assets, like bonds. Why would anyone hold a US Treasury that yields 0.72% over 10 years, when markets expect inflation to run above 2% over most of that period? That implies a real loss for bond holders and reaffirms that stocks are the only game in town for asset managers looking for any returns.

But while the market took the Fed’s signals as credible, that does not mean investors are entirely convinced the central bank will manage to do what it says. Five-year inflation breakevens have risen back above their pre-pandemic levels, but at 2.08%, they are still a far cry from signaling the meaningful overshoot in inflation that the Fed wants to make up for long periods of undershooting. 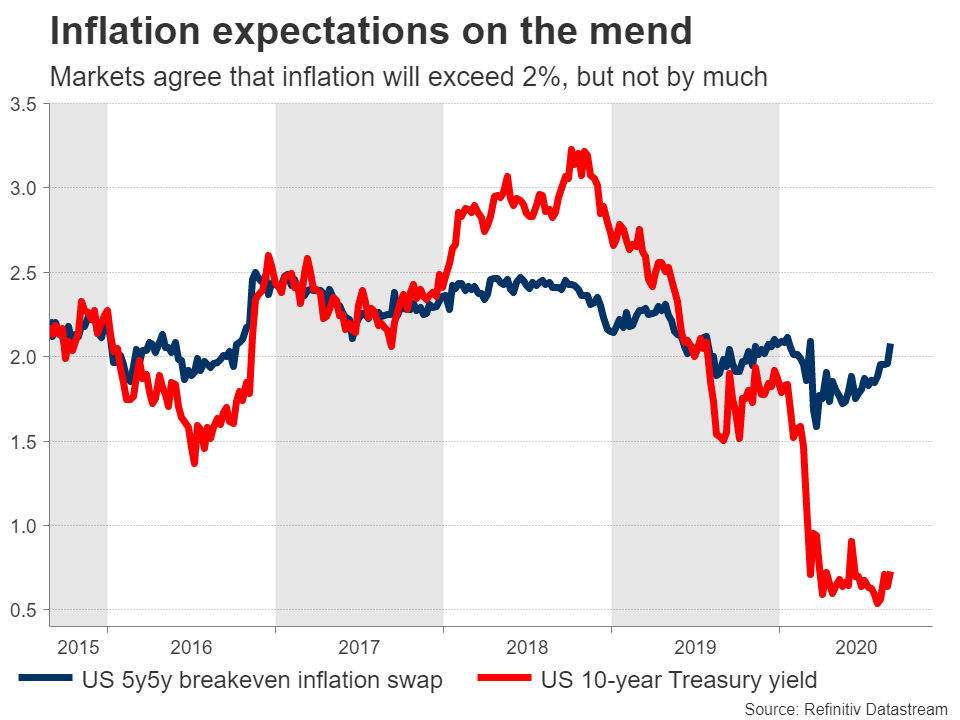 As such, the market believes the Fed when it says inflation will exceed 2% but does not believe policymakers will get it much higher than that. Something similar is implied by the dollar, which is recovering to start the new week.

While the dollar’s rebound is small, what is important is that the greenback did not break significant support levels on most charts – it managed to hold onto its recent ranges. That is encouraging for a currency as hated as the dollar is right now, especially considering all the fuel that Jay Powell provided.

One chart that did break significant levels though, was Cable. The pair broke above the $1.33 handle on Friday to touch its best levels this year, as the pound capitalized both on the weaker greenback and the broader ‘risk-on’ atmosphere.

Yet, sterling is back on the retreat today, which likely reflects some reports that the UK Treasury is preparing significant tax hikes to plug the hole that the pandemic has left on public finances. The core recipients of these tax increases would be businesses and investors, as both the corporate and the capital gains tax might be raised.

That is not what investors want to hear in the middle of a recession, as raising taxes implies a slower recovery. If this emerges as the next theme for the pound, the recent rally would be at risk.

Looking ahead to today’s events, the highlight on the economic calendar will be Germany’s preliminary inflation numbers for August.

Yet, the real highlight will be a speech by Fed Vice Chairman Clarida at 13:00 GMT. Powell’s top lieutenant is usually a beacon of clarity in terms of conveying the Fed’s goals, so markets will be eager to find out exactly how high of an inflation rate the Fed would tolerate before acting and what instruments might be deployed to achieve that.

Later, during the Asian session on Tuesday, the spotlight will turn to the Reserve Bank of Australia (RBA). The aussie has defied gravity lately thanks to the softer US dollar, stronger risk appetite, and rising iron ore prices, though the RBA could put a dent into that rally if it seems concerned about the effects of the second infection wave on the recovery.