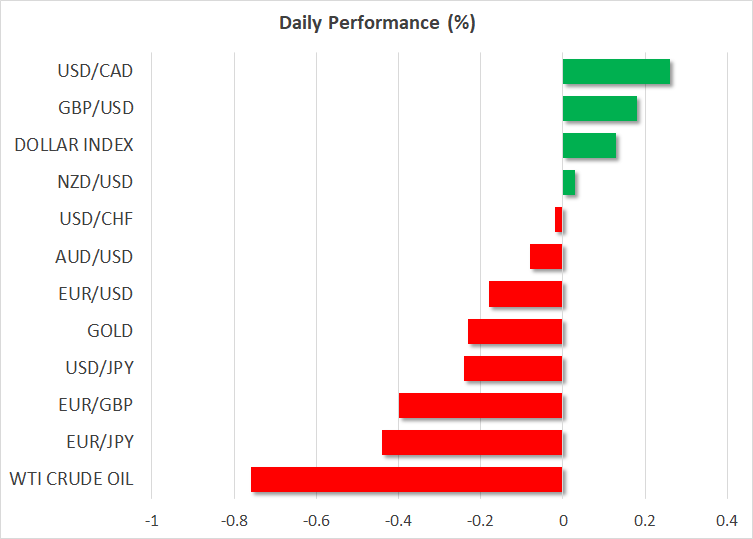 Dollar tries to put bad week behind it

It was a relatively calm start to the week in FX markets, but the momentum seems to be clearly behind the US dollar following a jump in US producer prices on Friday as well as Fed Chair Powell predicting an accelerated recovery in overnight remarks. The change in sentiment for the greenback comes after what was a very bruising week for the US currency as investors finally started to take note of the Fed’s repeated assertions that it is in no hurry to remove any of the extraordinary stimulus that’s been flooding the markets for a year now.

The dollar was last trading 0.15% firmer against a basket of currencies, extending its mild recovery from last Thursday’s 2½-week lows. The producer price index for final demand surged to 4.2% y/y in March, the highest in almost a decade, helping put a floor under the greenback’s recent slide. Tomorrow’s consumer price index is the next big data coming up out of the United States this week, to be followed by retail sales on Thursday. Robust numbers are expected for both datasets so the dollar could be in line for a more powerful rebound.

Yields steady after Powell but danger from large auctions ahead

In a further boost for the currency, Powell told CBS News that the US economy was at an “inflection point” in an interview late on Sunday. Powell said the economy is about to “start growing much more quickly and job creation coming in much more quickly” even as he reiterated the Fed’s wait-and-see approach with regards to inflation. The Fed chief will be speaking again on Wednesday but before then, investors will be keeping an eye on the massive issuance of new government debt over the next three weeks, starting today with $96 billion in three- and six-month Treasury notes, as well as three-, 10- and 30-year notes.

Treasury yields have been quite steady since late March, but the upcoming auctions have the capacity to produce a significant spike if there is insufficient demand to snap up the overload of new debt. The risk is that the auctions go poorly, sparking a fresh selloff in bond markets, and if at the same time the upcoming US data back up the fast-improving economic outlook, then equities could suffer while the dollar would thrive.

For the time being though, the recovery optimism is keeping stock markets supported. The Dow Jones and S&P 500 both ended last week at record highs. The rally was again driven by cyclical stocks as America’s rapid pace of vaccination is allowing the US economy to reopen faster than its peers, while the Fed reassuring that it won’t be raising rates anytime soon is helping to offset some of the fears of higher inflation.

However, futures for Wall Street’s main indices were slightly in the red on Monday as investors were wary ahead of the start of the new earnings season this week. Banks will be the first of the major companies to report, starting on Wednesday.

Meanwhile, in Asia, shares ended broadly lower, with Chinese stocks leading the declines amid worries that China’s quickening recovery will force authorities to tighten lending. China is expected to report double digit GDP growth for the first quarter on Friday.

Elsewhere, the pound was looking perkier as non-essential shops reopen in England today but the euro drifted lower for a second day. The Canadian dollar fell back from Friday’s highs when it was boosted from a very strong jobs report, while the yen advanced against most of its peers, pointing to a slight risk-off mood.

The subdued mood wasn’t of much help to gold, however, which extended its retreat from last week’s more than one-month high. Nevertheless, rising tensions between Russia and Ukraine could lend some support to the precious metal should it continue to come under pressure from a stronger dollar.