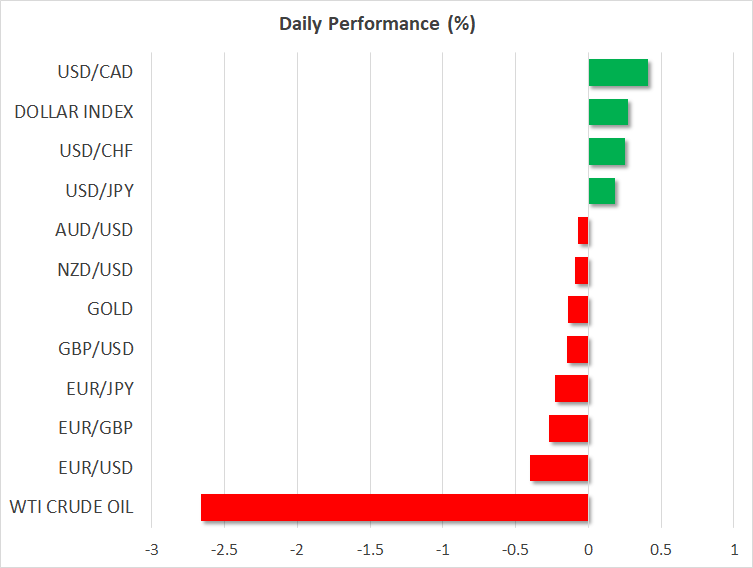 Market participants are playing some defense on Monday, slashing their exposure to riskier assets like stocks and rotating into the safety of sovereign bonds, amid a blitz of alarming headlines around the pandemic and the US election race. European virus cases continue to spiral out of control, forcing Spain to introduce a nationwide curfew to battle the contagion and Italy to close down bars and restaurants during nighttime.

There is also speculation that France may be headed for a full-on lockdown, after the nation announced record-breaking case numbers over the weekend, with an incredibly high positivity rate. The situation in America has taken a sharp turn for the worse too, with daily infections hitting records of their own and hospitalizations rising quickly.

The only ray of light comes from the vaccine front, where the drug being developed by Oxford produced an immune response in elderly patients, though the markets currently seem preoccupied with the immediate economic pain.

European equities opened with substantial losses and the gloom is echoed in futures tracking Wall Street, where the major indices are set to open almost 1% lower. Crude prices are under even bigger pressure as besides the risk-off mood, the oil market is also grappling with news that Libya is about to ramp up its production. In FX, the anxiety has breathed some life back into the dollar, especially against risk-sensitive currencies like the aussie and loonie.

The other element that is likely contributing to the risk aversion is how US election polls have moved lately. Biden is still leading Trump by a comfortable margin, but the gap has narrowed, especially in key battleground states like Florida. This raises the risk of a contested election that ends up disputed in the courts, and more importantly, it makes a divided Congress more likely. 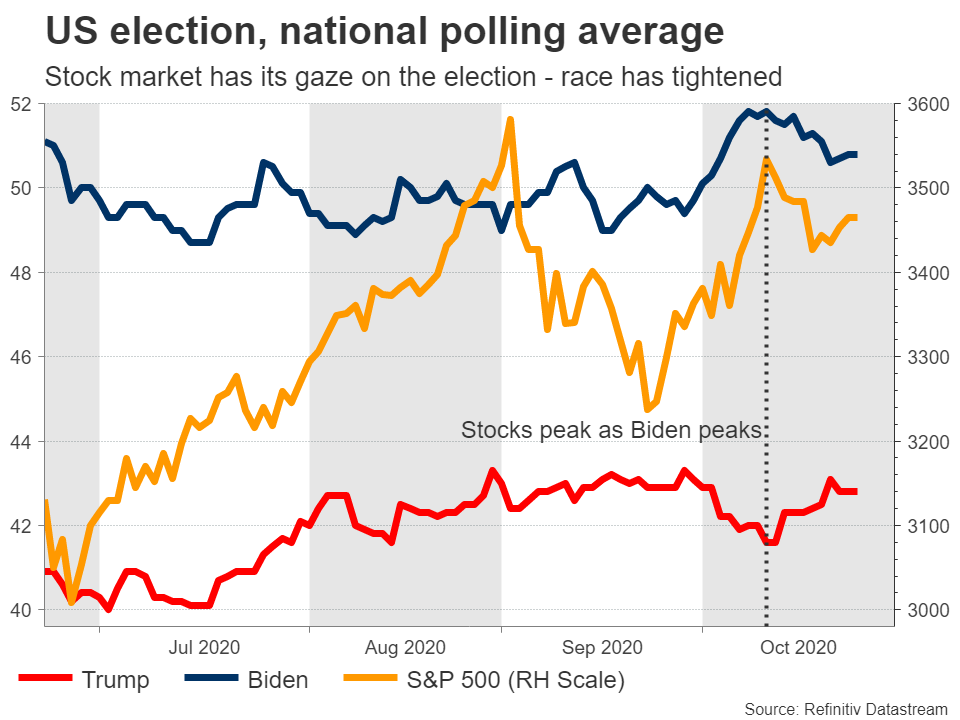 Hence, while the Democrats are still on track to wrestle back control of the White House, the odds that the Republicans keep the Senate have risen substantially, raising the risk of continued political deadlock in Washington D.C. This scenario would imply smaller stimulus packages next year and beyond, if anything goes wrong during the recovery phase.

The correlation between equities and election polls has strengthened lately, with the peak in the S&P 500 this month coming right as Biden peaked in the polling, and both drifting lower since. Equity investors therefore have their finger on this election’s pulse, which elevates the importance of incoming polls going into this week, as markets tend to attach even greater weight to polling conducted just before Election Day.

In other news, the US stimulus negotiations seem stuck in the mud for now, without any real progress being reported lately. Yet, the market reaction has been quite subdued in the sense that there hasn’t been any panic selling in equities or a surge in the dollar because of this, so investors seem to believe the deal has been delayed until after the election, not derailed entirely.

There isn’t much on the calendar for today, but the rest of the week is action-packed, with central bank meetings in the Eurozone, Canada, and Japan. The ECB could steal the show by opening the door for more stimulus, to negate the risk of a double-dip recession as the virus rampages through the continent.

Finally, third-quarter GDP data will be released in both the US and the Eurozone, while all the tech heavyweights will report quarterly earnings.