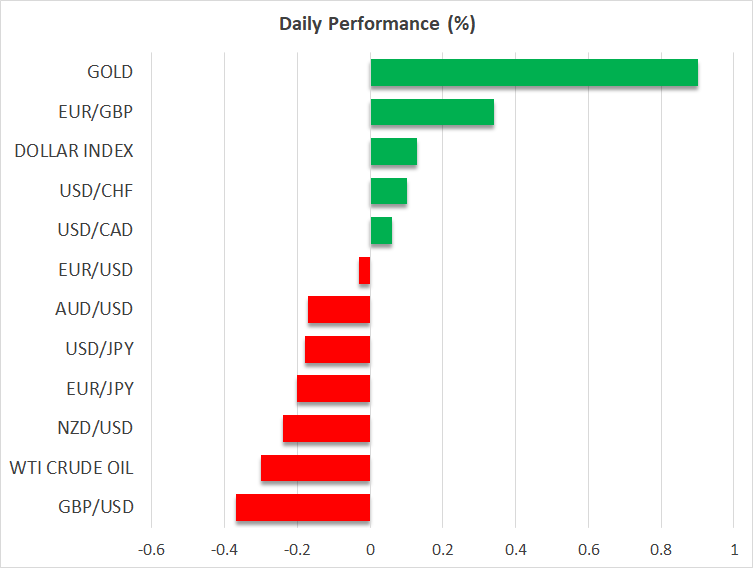 Bets for raging inflation in the coming years are being unwound at a stunning pace, sparking all sorts of havoc in the markets. It all comes back to the Fed, which signaled that the days of infinite liquidity are drawing to an end and that it will keep inflation under control by raising rates at a faster clip.

As such, the inflation trades that blossomed earlier this year are now falling apart, as long-dated inflation expectations and Treasury yields decline in tandem. The bond market is essentially pricing out inflation risk and that's spilling over into everything else.

Commodity prices from lumber to gold have taken an absolute beating, the dollar keeps powering higher, and stocks with high growth prospects are back in fashion as the 30-year Treasury yield tanks.

Lower long-dated yields are a blessing for growth stocks because the excessive valuations on many of these names make more sense the lower yields fall. In contrast, value and traditional stocks are more sensitive to short-dated yields, which have risen lately. Hence why the Nasdaq hit a new record high yesterday, whereas the Dow Jones struggled.

Over in the FX theatre, demand for the dollar has been relentless. The sharp rebound likely reflects a short squeeze as many players bail out of their bearish positions. It might also encompass a shift in expectations around the reserve currency in a world where the Fed takes a step back but other central banks keep hammering away.

The yen is the only major currency that managed to stand its ground against the almighty dollar lately. It turns out the unwinding of the inflation trade and the ensuing decline in long-yields has been beneficial for the yen, which lives solely off interest rate differentials.

That said, this doesn't seem like a real turnaround for dollar/yen. The Bank of Japan extended its pandemic-relief program earlier today and with the economy still trapped in deflation, it will be years behind the Fed in normalizing monetary policy – if it ever does.

Meanwhile, the British pound is on the retreat today following some disappointing data. Retail sales fell unexpectedly in May, sparking some concerns about fading reopening momentum. Of course, this drop comes after a breathtaking surge back in April, so it won't be concerning for the Bank of England, which meets next week.

In the commodity spectrum, gold is attempting a minor recovery on Friday but is still on track to close the week some 4.5% lower. Bullion has been one of the biggest casualties of the Fed's hawkish turn, as the withdrawal of endless liquidity coupled with falling inflation expectations and a stronger dollar is a devastating cocktail.

Admittedly, the collapse was too violent and looked overstretched, so a rebound here makes sense. Still, the longer-term trajectory seems negative. The positive catalysts that brought gold to the dance are simply fading, from cheap money to inflation fears to a struggling dollar.

As for today, the calendar is empty but that doesn't mean markets will be calm, as it's quadruple witching day. This is when options and futures on stocks and indices expire, which can spark decent moves without any real news.