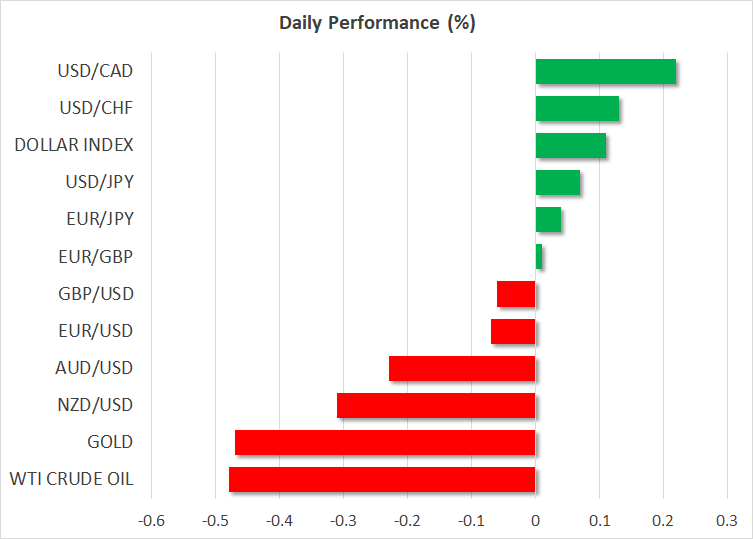 Risk assets were struggling on Monday as signs that virus infections have started to creep higher globally put a dent in the improvement in sentiment that took hold from the middle of last week. The US dollar ended its two-day slide to edge back up even as Treasury yields reversed lower again, underlining the recent breakdown of that relationship. The greenback typically tracks the moves in the benchmark 10-year Treasury yield but the positive correlation has switched into a negative one since late June when growth and virus jitters first resurfaced.

The highly contagious Delta variant of Covid-19 is running rampant in more and more countries, casting doubt on hopes that vaccines will bring about a complete reopening of economies. The worrying trend comes just as many central banks have started to or are thinking about pulling back some of their emergency stimulus.

There was some relief last week, however, when the Federal Reserve toned down some of its more hawkish rhetoric, signalling that a decision on tapering could still be months away. The market mood also got a lift from Chinese policymakers when they cut the reserve requirement ratio for banks, unleashing $154 billion of cash into the economy, alleviating some of the impact from a recent tightening of credit conditions in China.

The dollar was last trading marginally higher against a basket of currencies, while the 10-year Treasury yield brushed a low of 1.3330%. The bond market will be put to the test later today when the US government auctions $38 billion in 10-year notes. A sale of $24 billion in 30-year notes will follow on Tuesday.

The auctions could help ease the rally in bonds, pushing yields higher. However, it might be difficult for global bond yields to make a meaningful rebound if fears around the Delta variant persist.

Traders will also be closely watching Fed Chair Jerome Powell’s testimony before Congress on Wednesday and Thursday, when he is expected to reiterate that the Fed is in no hurry to wind down the monthly pace of asset purchases. But other central banks might sway in the opposite direction as the Bank of Canada will probably taper again this week, although there’s a little more uncertainty as to how the RBNZ will manage market expectations of a November rate hike when it meets on Wednesday.

In the meantime, risk-sensitive currencies were underperforming on Monday. The Australian dollar slipped by around 0.2%, having failed once again to crack above the $0.75 barrier and after Australian authorities extended Sydney’s lockdown. The Canadian and New Zealand dollars were down by a bigger 0.3%, with sterling not far behind.

The euro bucked the trend, however, standing almost flat on the day versus the greenback. It’s hard to pinpoint what could be supporting the euro more than other majors today. Perhaps markets are confident the Eurozone will weather the Delta storm a bit better than other countries, or it’s the disappointment that the ECB didn’t announce a too radical overhaul of its monetary policy strategy last week that would have involved a looser inflation target like the Fed has adopted.

Investors even shrugged off hints from President Lagarde in an interview earlier today that the ECB will significantly modify its forward guidance at the next meeting later this month. The ECB is desperately trying to strike a dovish tone but confusing signals amid a split Governing Council seem to be undermining that message.

Stocks may already be rebounding after sluggish start

It’s looking like a mixed day for equity markets as European and US stock futures were in negative territory towards the end of Asian trading, despite a positive session. However, some European shares as well as Nasdaq futures have now turned positive, suggesting risk appetite could bounce back later in the day.

Aside from the busy economic and central bank schedule lined up this week, the Q2 earnings season will kick off on Wall Street, starting with JPMorgan Chase and Goldman Sachs tomorrow. Both the S&P 500 and Nasdaq Composite ended Friday in record territory, unhindered by the latest virus scare. Bumper earnings could help stretch the winning streak.