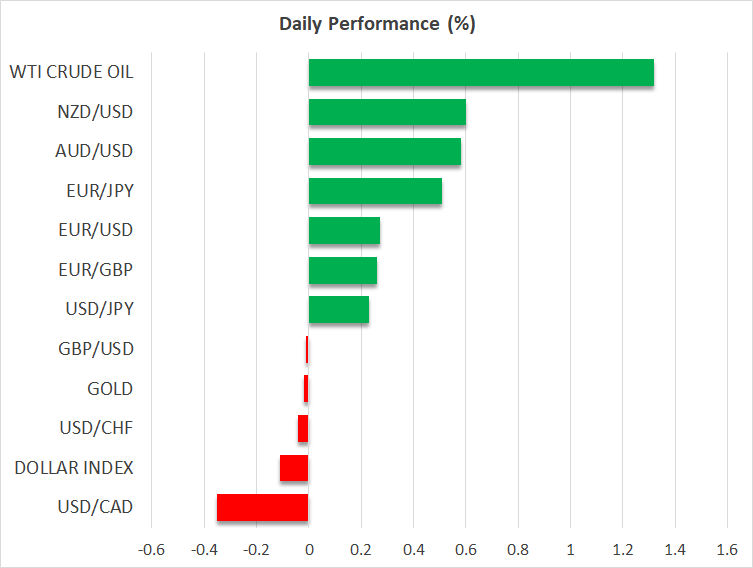 A bad month for the US dollar keeps getting worse. The reserve currency fell through some crucial support levels across multiple charts yesterday and negative technical momentum has dominated ever since. It has really been one-way traffic downhill this entire quarter so far.

The dollar's troubles seem based on three pillars: receding bets for a Fed rate increase next year as FOMC officials insist they won't overreact to impressive economic data, the acceleration in European vaccinations, and the overall euphoric mood in equity markets.

The Fed has been adamant lately that it will keep a steady hand, forcing traders to wind back the aggressive pricing for rate increases that catapulted the dollar and Treasury yields higher last quarter. Meanwhile, Europe has finally ramped up its immunization program, allaying concerns about lockdowns making a comeback down the road and leading markets to recalibrate their expectations for economic growth.

As always, the question is how much of this narrative is already priced in and whether there's scope for euro/dollar to power even higher. In a nutshell, while the technical wind is blowing in the pair's favor right now, it's doubtful that this dynamic can last for long in an environment where America out-recovers Europe. The Fed will be faced with some scorching data soon and might be boxed into 'talking' about QE tapering by next quarter already, something the ECB won't do for a long time.

Interestingly enough, it was the British pound that capitalized the most on the dollar's pain. Cable rose from the ashes to hit the psychological region of $1.40, even without any UK-specific news behind the move. Looking ahead, it's a complex picture to navigate.

On the bright side, the UK economy has almost fully re-opened and about 60% of the adult population has received at least one vaccination shot. However, the quality of vaccinations is an issue. Most people have received the Oxford/Astra shot, which is less effective against new variants, implying that Britain's immunization program is not quite as 'bulletproof' as America's. There's also some political risk surrounding Northern Ireland and Scotland.

Stocks take a hit, earnings in the spotlight

Elsewhere, Wall Street hit a speed bump yesterday. The major equity indices retreated a shade from their record peaks, with Tesla (-3.4%) dragging the ship down amid reports of a fatal car crash and the havoc in cryptocurrencies.

Overall, market participants appear to be taking some chips off the table as the earnings season gets rolling. Optimism is running very high and the earnings outlook has likely been priced to perfection at these levels, so anything less than absolutely stellar results might be seen as a negative surprise. Hence, it's quite natural for some investors to 'play defense' here and try to sidestep a potential correction.

In this sense, all eyes will be on the string of earnings results that will be released today, most notably from Netflix, Johnson & Johnson, and Lockheed Martin.

Otherwise, the economic calendar is virtually empty today. Traders will have to wait until the Bank of Canada rate decision tomorrow for some excitement, and for the European Central Bank meeting on Thursday. Although nothing much is expected from the ECB, it will be interesting to see whether the central bank is comfortable with the continued rise in euro area yields and the euro's resurgence.

View All
XM Research - 52 minutes ago