US equities take to the skies amid stellar data and tax doubtsDollar drops as euphoric mood diminishes safe-haven demandEuro and yen capitalize on dollar's setback, but for how long? 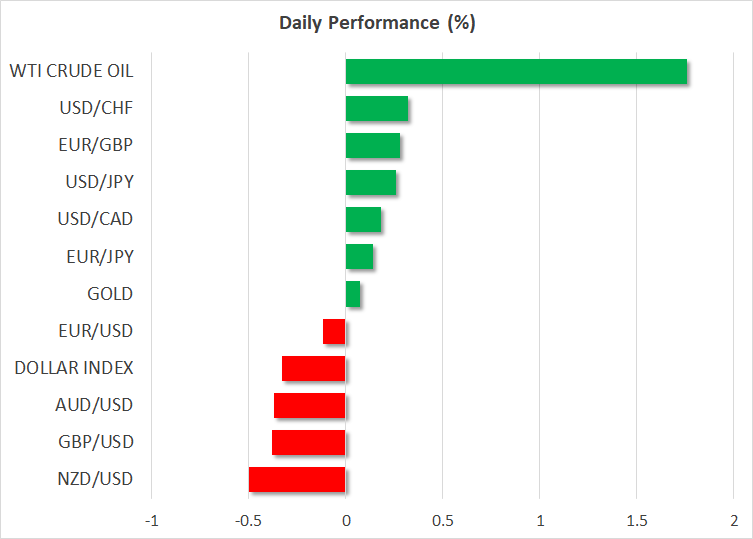 There's no stopping the stock market freight train. Euphoria took over financial markets on Monday after another stellar batch of US economic data, propelling the S&P 500 to new record highs. The catalyst was the ISM non-manufacturing survey, which hit an all-time high of its own in March, lighting a fire under riskier assets.

Coming hot on the heels of an impressive employment report last week, the dazzling ISM survey reaffirmed that the American economy is running like a well-oiled machine once again, empowered by a swift vaccination program and a storm of federal spending. Importantly, this might only be a taste of what's to come in the next months, as pent-up demand is unleashed and more stimulus rolls in.

But it gets even better for markets. President Joe Biden has a small mutiny on his hands, with some senators from his own party opposing the corporate tax increase he has proposed as being too high. Senator Joe Manchin said that raising the corporate tax rate to 28% is too much, but he could support a smaller hike to 25%.

The Senate is split 50-50, so Biden needs every single Democrat senator with him to pass his infrastructure agenda. Hence, it looks like the tax-raising side of this bill might be toned down, as Biden puts water in his wine and negotiates with his own party.

Good news is bad news for US dollar

Over in the FX domain, most currencies capitalized on a retreat in the US dollar. The reserve currency took some heavy fire despite the stellar US data, as fading demand for safe-haven plays overpowered the improving economic picture. In other words, good economic news was bad news for the dollar, which often doubles as a defensive asset.

That said, this is a rare phenomenon nowadays. The greenback did behave almost exclusively like a safe-haven last year, but this year it has transformed into the US currency again. The short-term correlation with stock markets is now back to positive, after being deeply negative throughout 2020. As such, it might not be wise to draw any conclusions based on yesterday's moves.

As is usually the case, a sinking dollar lifted all others FX boats, with the euro and yen coming back to life. Even the battered Swiss franc got a shot in the arm. The question is whether all this was a minor setback in the broader US dollar uptrend, or whether the correction still has legs.

Overall, it is difficult to be pessimistic on the dollar. The US economy is already stronger than Europe's thanks to fewer lockdowns, is miles ahead in the vaccination race, and has more stimulus coming. Euro/dollar could remain heavy until one of these elements turns.

Oil prices seem to have decoupled from market sentiment lately as supply dynamics have returned to the spotlight. Crude prices dropped sharply yesterday despite the cheerful mood elsewhere.

Markets seem to be grappling with the fact that OPEC+ will gradually raise its supply in the coming months, and that tensions between Iran and America are easing. The two nations will hold talks about resuming the nuclear deal this week, and if there is a breakthrough at some point, a flood of lost production could ultimately return to the market.

Finally, the RBA policy meeting was a non-event for the aussie.