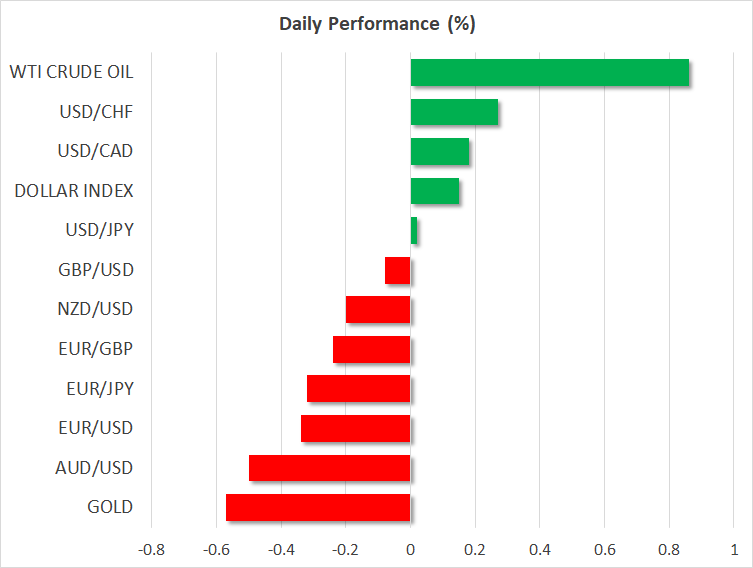 Just a wobble or start of a deeper correction?

The market mood remained undeniably downbeat on Tuesday following yesterday’s acceleration in the selloff that’s gripped equities during the course of September. European shares took the heaviest beating as banking stocks were pummelled from allegations of money laundering, while across the Atlantic, election anxiety beset investors already nervous about the stalemate in Congress over the new virus relief bill.

The fresh jitters come against a backdrop of surging COVID-19 cases in Europe and a slowing recovery in all the major economies. With neither the Federal Reserve nor the European Central Bank expected to unleash any new stimulus anytime soon, markets are struggling to maintain their upward momentum. In the meantime, the October 15 deadline for the Brexit talks and the November 3 election in the US are fuelling the uncertainty as the economic and political landscapes could be about to undergo a dramatic shift.

Nevertheless, the wild trading had calmed a bit on Tuesday and European stocks attempted to recoup some of yesterday’s losses, though US futures were mixed.

The growing list of headwinds hanging over the outlook drove investors to the safety of the US dollar and yen on Monday and the two currencies extended their gains today, signalling that markets were still very much in a risk averse mood.

The dollar index climbed to a six-week top, while the yen soared to multi-week highs against all its major peers. The Japanese safe haven had even brushed 6-month highs versus its US counterpart before the greenback caught up.

The sudden reversal in dollar/yen has raised suspicions about currency intervention by the Japanese government. But nonetheless, the dollar appears to have trampled over gold in its comeback bid. The precious metal remains heavily skewed to the downside despite the diminishing risk appetite and looks set to breach the $1,900/oz level.

Sterling was on a steadier footing on Tuesday as fears of a new nationwide lockdown in the United Kingdom subsided. The prime minister is expected to announce new restrictions later today that could force pubs and restaurants to shut early and encourage people to work from home if they can.

The pound had fallen sharply yesterday, slipping below $1.28, on the prospect of much tougher curbs to combat a jump in the virus infection rate in the UK. But like in the rest of Europe where virus cases are also rising uncontrollably, there seems to be little appetite for national lockdowns.

In a further boost for the pound, the UK and EU announced today they will resume high-level Brexit talks next week, indicating the two sides have not given up on reaching a post-Brexit trade deal after tensions flared recently.

Not faring so well today was the Australian dollar, which slid to 4-week lows after RBA Deputy Governor Guy Debelle raised the prospect of further monetary easing. Debelle said that expanding yield curve control, cutting rates and forex intervention were some of the options the Bank was considering. The comments mark an unexpected U-turn for the RBA after recently signalling it would stay on hold for the foreseeable future.

Another central bank that is keeping its options open is the Reserve Bank of New Zealand, which is due to announce its latest policy decision tomorrow. The RBNZ is not expected to announce any changes in policy but could hint at negative rates as New Zealand faces a potentially slower recovery from the pandemic. The kiwi was trading flat on the day ahead of the decision.