· Dollar comes back fighting, stocks pummeled after US inflation surprise· Traders price in Fed rate hike for next year, but it's still early days· Producer prices coming up today ahead of crucial retail sales tomorrow 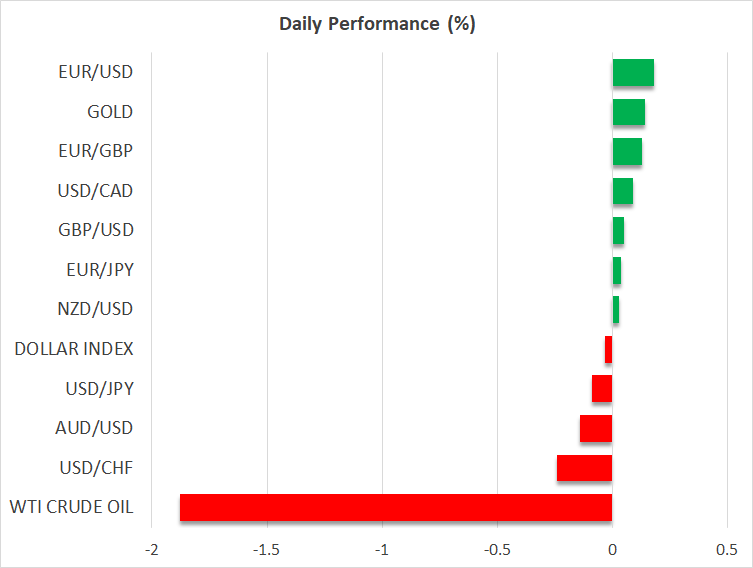 Inflation wins this round

Worries around higher interest rates being on the horizon have returned to torment Wall Street once again after some shockingly strong inflation numbers out of America. Consumer prices clocked in at 4.2% on an annual basis in April, exceeding the wildest forecasts among economists and reigniting the debate over when the Fed will begin to turn the cheap-money ship around.

Much of the spike comes down to base effects after last year's collapse in inflation, but even stripping those out, prices are still rising at an alarming clip as booming commodity prices and supply shortages meet roaring demand.

Markets were blindsided and the response was fierce. The dollar got its magic back while stocks were steamrolled as investors recalibrated the timeline for monetary policy normalization, with eurodollar futures contracts pointing to an almost 80% chance for a rate increase by December next year.

It's all about retail sales now

But for all the enthusiasm, this isn't quite enough to jolt the Fed into action. Inflation might be showing its teeth but the labor market is still stuck in low gear. Ultimately, we are back to where we were last week in terms of narrative.

We had a massively disappointing jobs report and then a scorching hot inflation print, which in a sense cancel each other out in the Fed's eyes. The casting vote will be tomorrow's edition of retail sales. It will either calm some nerves or truly open the trap doors for a summer 'Fed-ache'.

All told, it's probably too early for the tapering discussion to begin in the summer even if inflation accelerates further. It's a delicate process that requires subtle hints over some time and a continued endorsement from incoming data, especially from the labor market.

The turning point might be in late August at the Jackson Hole or the September FOMC meeting. Until we get closer to that point, it's difficult to envision any tremendous dollar strength or a real implosion in stocks. The liquidity taps are still wide open.

The shock waves continue to reverberate, with futures pointing to another lower open on Wall Street today. And with yields on Treasuries rising as investors dump bonds to shield their portfolios from the inflationary nova, it seems that many players are simply moving to cash.

Even commodities are trading lower, which implies there's no place to hide for now. Gold got hit by the spike in real yields yesterday and the resurgent dollar. Still, an environment of rising inflation and still-loose monetary policy is great news for the yellow metal, which could continue to sparkle until the Fed actually pulls the QE plug.

Aside from the dollar, the FX market has been exceptionally quiet. There's been a clear disconnect lately, with currencies being mostly immune to the troubles in stock markets.

As for today, US producer prices could attract some attention amid the ongoing inflation scare. The Fed's Barkin (14:00 GMT), Waller (17:00 GMT), and Bullard (20:00 GMT) will all deliver remarks.

Daily Market Comment – All quiet before ECB and US CPI; dollar resists slump in yields