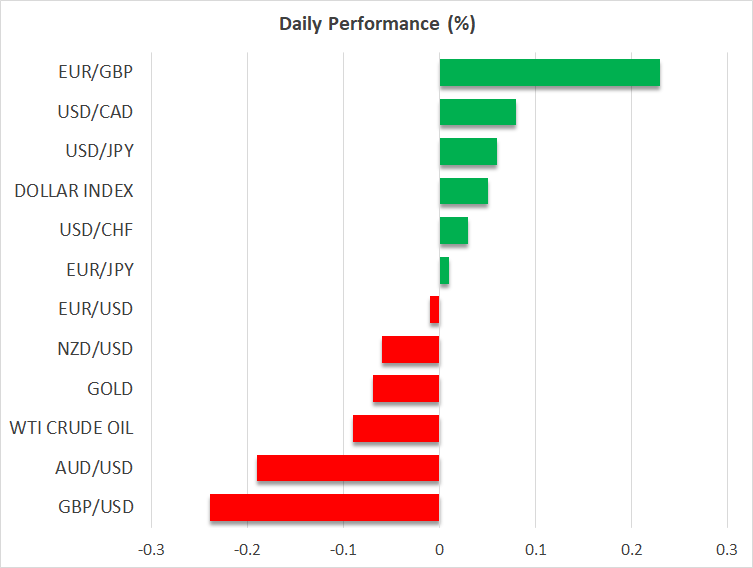 It’s been a hectic start to the new week. US stock markets took a sharp dive on Monday for no apparent reason, but quickly recouped those losses and still managed to close at record highs. It seems that an army of retail traders have ‘broken’ the stock market’s plumbing, sparking short squeezes left and right by piling into some of the most heavily shorted names in a hive-like manner.

The explosion in retail trading during the pandemic has given rise to all kinds of weird phenomena, but yesterday was the clearest example as the insanity in smaller names was enough to briefly kneecap the S&P 500 itself. This eruption in volatility has reignited fears around a speculative bubble.

Back in the real world, it seems that Biden’s relief proposal will be delayed until mid-March, according to Senate majority leader Schumer. This means that the stimulus bill will come after Trump’s impeachment trial, which is not a market-friendly priority order. Meanwhile, Republican senators are calling for ‘targeted’ relief measures, which is a euphemism for ‘less’ than what Biden proposed.

Faced with the risk that the new stimulus package will be both delayed and watered down, Wall Street is set to open a touch lower on Tuesday.

Things are calmer in the FX arena, where the US dollar is trading a shade higher, capitalizing on the cautious tone. The spotlight is on euro/dollar that is testing its 50-day moving average, a support region that has been a fortress lately.

On the fundamental front, the euro area is going from bad to worse. German Chancellor Merkel is warning that the pandemic has ‘slipped out of control’ and is calling for stricter measures, while France could go into another lockdown at any moment. On top of everything, Europe has been hit by serious delays in vaccine deliveries.

Hence, the euro area economy is likely to suffer at the hands of more shutdowns, might be the last major region to make a full recovery given its immunization troubles, and there is no real political appetite for gigantic relief packages. The economic divergence with America could become clearer going forward, keeping the risks surrounding euro/dollar skewed to the downside.

That said, the pair’s immediate path may be decided by other forces for now, such as how risk sentiment evolves, how dovish the Fed is tomorrow, and the Italian political situation. Italian Prime Minister Conte resigned yesterday and will attempt to form a new government that can be backed by Parliament to avoid a snap election.

Gold trapped in ‘no man’s land’

In the precious metals space, gold has been exceptionally quiet lately, staying trapped in a narrow range between its 50- and 200-day moving averages. It is striking that bullion hasn’t posted any meaningful gains even as real 5-year US Treasury yields plummeted to new record lows.

Looking ahead, the ‘sweet spot’ for gold may be around April-June, as inflation fires up but the Fed is still reluctant to discuss QE tapering. However, once the tapering discussion begins, the longer-term outlook would shift to negative.

As for today, all eyes will be on corporate earnings, including from Microsoft, 3M, Johnson & Johnson, and many others.