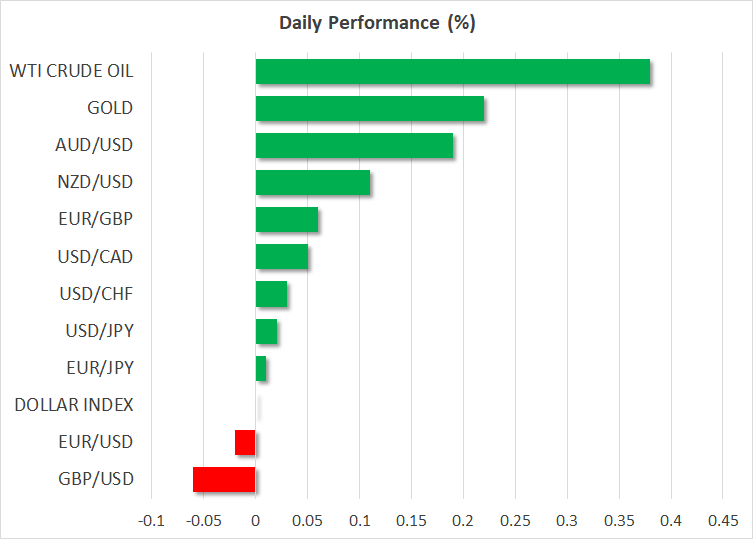 It’s the start of the second quarter earnings season and optimism is running high that the reopening of the US economy will power corporate earnings to new peaks. The new season will properly kick off today when JPMorgan Chase and Goldman Sachs report their results before the market open. More big bank earnings will follow in the coming days.

But there’s already plenty of buzz on Wall Street that Q2 earnings will beat the consensus estimates on expectations that the vaccine-led recovery boosted companies’ bottom lines as the reopening of the world’s largest economy gathered pace. The three leading indices – S&P 500, Dow Jones Industrial Average and Nasdaq Composite – all closed at new all-time highs for a second consecutive day on Monday.

Tesla stocks (+4.4%) led the charge as the company rolled out a software update, adding full self-driving capabilities to paid subscribers.

E-mini futures tracking the three indices were trading slightly lower as European shares opened mixed on Tuesday. But Asian stocks had another strong session, lifted by better-than-expected trade figures out of China, which eased concerns about slowing growth.

Dollar, yields brace for US CPI and Powell

Reports that progress is being made in the US Congress on both the partisan and bipartisan bills of Biden’s infrastructure plan may also be supporting sentiment in equity markets. But in the currency sphere, traders are mainly focused on this week’s US data releases and Fed Chair Powell’s congressional hearing on Wednesday.

Powell is unlikely to say anything that would rattle investors but nevertheless markets will be hypersensitive to any remarks that suggest tapering could begin soon. Ahead of Powell’s appearance tomorrow, all eyes will be on the June consumer price index due today at 12:30 GMT.

Expectations for the headline CPI rate are for a reading of 4.9% y/y. However, there’s probably a slightly greater risk of a weaker number this time, which could spark another spending spree into US Treasury bonds, sending yields tumbling again.

The 10-year Treasury yield stabilized late last week and has recovered to around 1.36%, holding steady during yesterday’s auctions. But if yields were to dip again, it’s unclear which way the US dollar would go following the recent breakdown of their positive correlation.

Kiwi crawls higher ahead of RBNZ

What is evident, however, is that riskier currencies have been struggling to make much headway against the greenback lately during both risk-on and risk-off days. Even the New Zealand dollar has been unable to capitalize on growing expectations that the RBNZ will raise rates as early as November this year.

The RBNZ is due to announce its latest monetary policy decision early on Wednesday and the kiwi could come under pressure if policymakers hint that they disagree with the markets’ timetable for rate hikes.

The US dollar was last trading slightly firmer against a basket of currencies but flat versus the safe-haven yen. The aussie and kiwi inched up against both the greenback and yen, while the euro and pound were weaker across the board.

In commodities, oil futures were trading about 0.8% higher despite no sign yet that Saudi Arabia and UAE are close to resolving their differences over how to ease the output restrictions. Gold, meanwhile, held within its recent range, hovering just above $1,800/oz.

View All
XM Research - 16 hours ago