Daily Market Comment – Will the ECB disturb the waters? 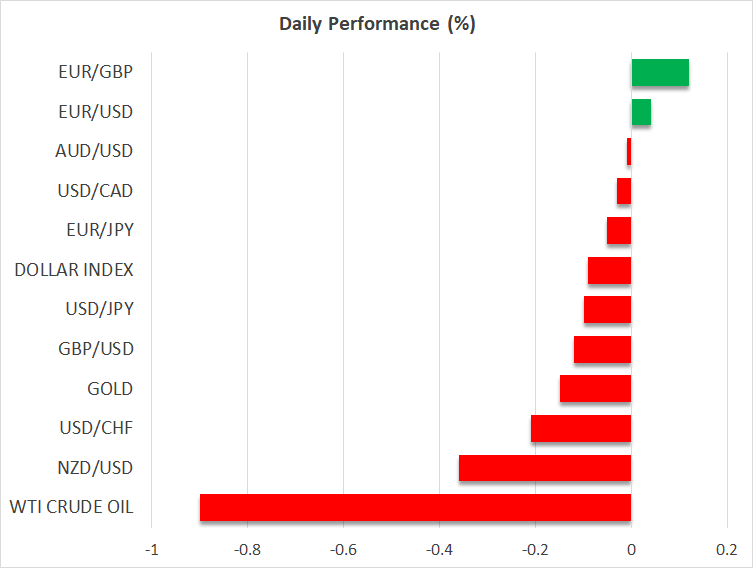 Lagarde's tone to drive the euro

The spotlight will fall on the European Central Bank meeting today. Not much has happened since the latest decision in March, but if anything, economic developments since then have been slightly encouraging. Economic data like the PMI surveys have been surprisingly resilient despite the extended lockdowns in much of Europe, and the immunization program has accelerated.

Reflecting these improvements, the euro has staged a relief rally and government bond yields have risen a little, even as the ECB ramped up the pace of its asset purchases to fight all that. Yields are still underwater, but they might be a shade too high for the ECB's liking. In other words, the minor improvement in the economic outlook might be negated by adverse financial developments in the central bank's eyes.

Hence, this could be a quiet meeting. The market reaction will depend on whether President Lagarde places more weight on the brighter economic outlook, fueling expectations for QE purchases to be dialed back soon, or whether she maintains a cautious tone to avoid propelling yields even higher. Either way, any massive reaction seems unlikely.

Overall, much of the positive news for the euro seems priced in by now, after this rebound. No matter how you slice it, the Fed will begin to normalize policy way before the ECB does, as the US economy has weathered the storm far better. As such, the wind in interest rate differentials could continue to blow in America's favor, keeping the risks surrounding euro/dollar tilted to the downside.

Staying in the central bank arena, the Bank of Canada officially turned the ship towards tighter monetary policy yesterday. It scaled back its QE program as expected, and signaled that the slack in the Canadian economy will likely be absorbed by late 2022, opening the door for a rate increase around that time.

The Canadian dollar naturally skyrocketed as investors recalibrated the timeline for rate hikes. Now to be clear, the BoC's forecasts merely suggested that economic slack will be eliminated by around the final quarter of 2022, instead of the first quarter of 2023. That's only a difference of one quarter, but the calendar effect seems to have amplified the importance of this signal.

Still, the direction of travel is clear - the BoC may be the first major central bank to raise rates again. Therefore, the fortunes for the Canadian dollar seem bright, especially in an environment of elevated commodity prices, accelerating vaccinations, and positive spillover effects from the stunning federal spending in America.

All told, the BoC seems like the canary in the coal mine for how the Fed might shift gears in the summer or fall, as all the stimulus rolls in and pent-up demand is unleashed, pushing the US economic engine into overdrive.

Elsewhere, shares on Wall Street came roaring back on Wednesday, nearly recouping all of their losses for the week. There wasn't any major news catalyst behind this rebound, so it seems some players were simply happy to buy any dip, which has been the dominant market psychology this past year.

The earnings season will continue with Intel, American Airlines, and AT&T being among the biggest names to release their quarterly results today.

Finally, crude oil prices remain under pressure as both the demand and supply outlooks have come under fire lately, with a worsening virus outbreak in emerging markets and signs that talks between US and Iran are moving forward.

View All
XM Research - 18 hours ago