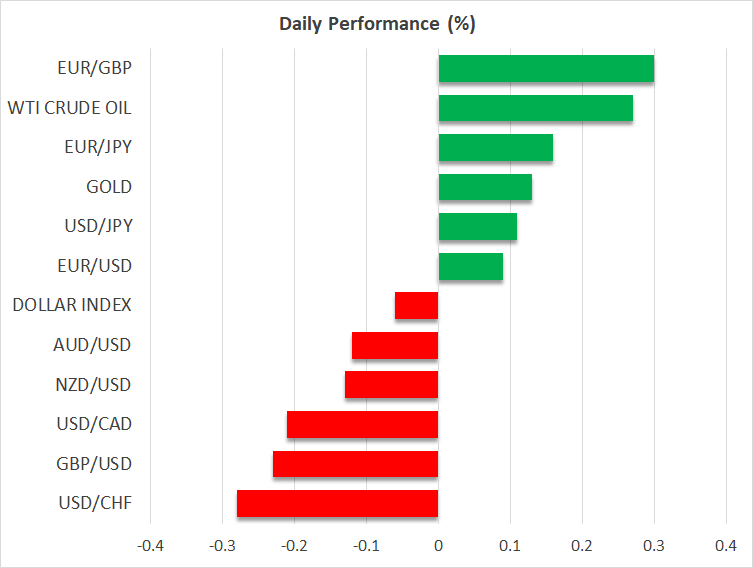 US recovery gathers steam but Treasuries in puzzling move

The US economic outlook continued to brighten after retail sales surged almost 10% in March and jobless claims declined to a new post-pandemic low last week. The stellar data indicate America’s recovery is racing ahead of its rivals as the flood of stimulus is boosting consumption while the speedy vaccine rollout is shoring up confidence and allowing businesses to reopen.

However, this narrative is nothing new and now that the actual data is matching the expectations that investors had been steadily pricing into the markets since the start of the year, there’s been a bit of unwinding of those moves in April.

Treasury yields plunged on Thursday after the robust data, with the 10-year yield falling to one-month lows. Yields tend to rise on positive economic indicators as bonds are sold off on expectations that interest rates will rise. But there was no selloff yesterday. Instead, investors rushed into bonds, pushing yields lower.

It seems that the strong numbers didn’t materially change the outlook that’s already baked in and after the sharp Q1 selloff, investors have been snapping up Treasuries in April. International demand for US Treasuries could also be contributing to this shift, as well as some brewing of geopolitical tensions, which are beneficial for safe-haven bonds.

But ultimately, the reversal in yields is being driven by the Fed’s commitment to maintain ultra-loose policy until the labour market is close to a full recovery. At this stage of the recovery, the data will probably remain volatile and until there’s a steadier picture emerging, investors will have to take the Fed’s word that there’s still a long way to go and it isn’t about to pull the plug on all the stimulus.

Dollar headed for weekly losses but gold bounces back

The US dollar followed yields lower on Thursday and has stabilized today. Its index against a basket of currencies is on track for a second straight week of losses as the yen firms below the 109 level and the euro scales a six-week high.

The commodity-linked Australian, Canadian and New Zealand dollars have also had a good week, but the pound’s rebound has lagged that of its peers. While a slowing vaccine rollout in the UK has eroded some of sterling’s positive momentum, rising political risks are also weighing on the currency.

Boris Johnson’s government has been hit by a sleaze scandal in recent days, while tensions in Northern Ireland and the prospect of a fresh independence referendum in Scotland have added to the anxiety.

In commodities, the safe-haven gold joined risk assets in powering higher, hitting a 7-week peak of $1769.37/oz on Thursday. Apart from the slump in Treasury yields and the dollar, a worrying deterioration in US-Russia relations could be attracting some additional flows in the precious metal’s direction. This comes on top of recent frictions between the US and China over Taiwan’s sovereignty.

Fresh records for Wall Street and Europe after data boost

The mood in equity markets was distinctly more positive, however, as traders were inundated by eye-popping Chinese GDP figures hours after the flurry of upbeat US releases. China’s economy grew by a record 18.3% y/y in the first quarter and monthly readings pointed to a pickup in consumption in March. However, the quarter-on-quarter growth rate fell well short of expectations, casting doubt about China’s recovery going forward.

Nevertheless, most Asian stock indices closed higher today and several European bourses opened in uncharted territory following another record setting session on Wall Street on Thursday. The Dow Jones and S&P 500 both closed at a new all-time high as the earnings season has so far gotten off to a very strong start. The Nasdaq 100 also hit a new record, though the Nasdaq Composite has yet to surpass its February peak.

It will be much quieter on the earnings front today, with Morgan Stanley’s results, expected before the market open, being the main highlight. 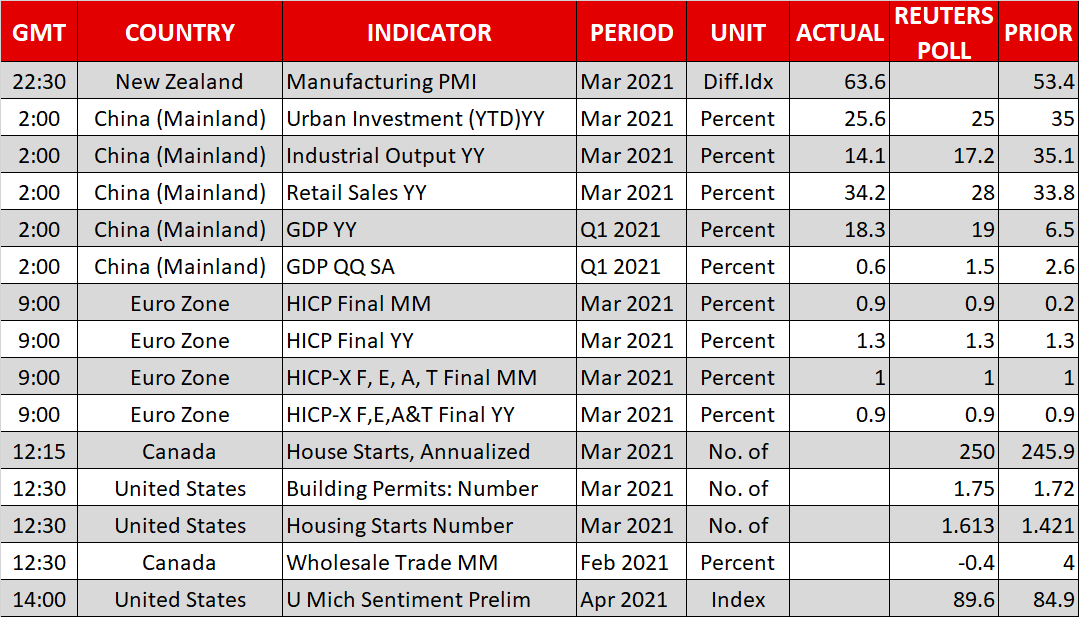