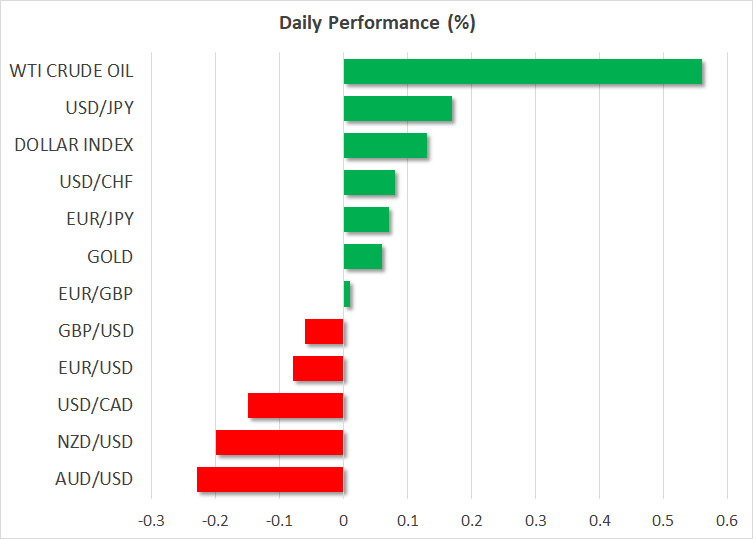 Stocks in China were attempting to break their losing streak on Wednesday following three days of carnage triggered by regulatory tightening that targeted domestic tech giants and for-profit education firms. China’s blue chip CSI 300 index was in positive territory in late session, while the SSE Composite index had trimmed more than half the day’s losses.

But other Asian indices struggled following a lower close on Wall Street yesterday. Japanese shares were the worst performers amid a record number of Covid cases reported in Tokyo on Tuesday as the Olympic Games got into full swing. Australia’s S&P/ASX 200 index also underperformed after Sydney’s lockdown was extended by four weeks.

No earnings boost for Wall Street

US earnings results continued to confound analysts’ expectations, with Apple, Microsoft and Google all beating their revenue and EPS estimates. However, their stocks ended the day lower prior to the upbeat announcements that came after the market close as investors fretted about the possibility that the incredible first half growth in earnings won’t be repeated in the second half.

The revised guidance was a reminder that even highly vaccinated populations are at risk from the Delta variant, which continues to spread rampantly in many parts of the world, dashing hopes of a quick end to the pandemic.

However, there was some good news out of the US as a closely watched consumer confidence gauge climbed to a 17-month high in July. Nevertheless, all three leading US indices ended Tuesday down, with the Nasdaq Composite sliding 1.2%. E-mini futures remained in the red in early European trading, though they were off their lows, but European stocks opened higher. Facebook, Qualcomm, Boeing and Ford are among the highlights of today’s earnings schedule.

Fed could set the tone as dollar and yields firm

More strong earnings could help buoy the market mood as the latest jitters may have been overdone by long-overdue profit taking for US shares. But slightly detracting attention away from earnings today is the FOMC decision that’s due at 18:00 GMT, followed by Fed Chair Powell’s press conference 30 minutes later.

The Fed is not expected to deviate from the script today but Powell may reveal a bit more about how far tapering discussions have come in his press briefing. The odds of a hawkish surprise have diminished after the recent Delta scare, but that makes depressed Treasury yields even more susceptible to upside shocks should Powell demonstrate little concern about rising virus cases.

The 10-year Treasury yield edged slightly higher today, helping the greenback recoup some of yesterday’s losses. The pound has been benefiting the most from the US dollar’s latest retreat, surging past the $1.38 barrier. It was last trading marginally lower at $1.3863. Falling UK virus cases could be bolstering sterling because the riskier antipodean pairs have not been able to achieve much of a rebound from last week’s lows.

Even a big jump in Australian inflation has been unable to lift the aussie as prolonged lockdowns are weighing heavily on the RBA policy outlook.

The euro, meanwhile, was trying to hold above the $1.18 level and the Japanese yen was broadly weaker, underlining the slight improvement in the risk tone.