The moving average is one of the most popular indicators used in chart analysis and its main purpose is to identify the direction of a trend and also define potential support and resistance levels.

In the chart below we can see the moving average shows price direction is down and acts as resistance to prices in this downtrend. 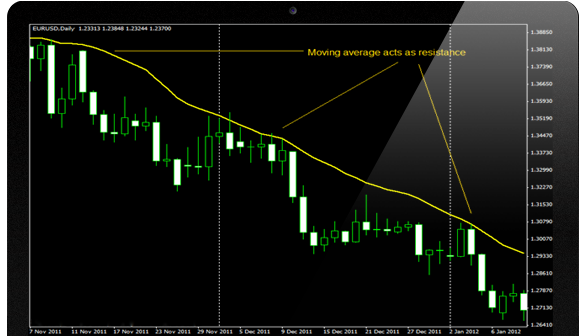 The moving average is considered to be a lagging indicator. It does not predict price direction, but rather defines the current trend with a lag.

The moving average indicator filters out noise by smoothing out price and volume fluctuations that can confuse interpretation and it therefore makes it easier to view the underlying trend. It appears as a line on a chart close to price action and it shows the average value of a security’s price over a set period of time. For example, to calculate a 21-day moving average, the closing prices of the last 21 days are added up and the total is divided by 21.

We perform the same calculation with each new trading day forward. Each time, only the prices of the last 21 days are used in the calculation. This is why it is called a moving average.

For example, to calculate a 5 day WMA, we should take the closing price of the 5th day and multiply this by 5, the 4th day by 4, the 3rd day by 3, the 2nd day by 2 and the 1st day by 1. Once the total has been determined, we then divide the number by the addition of the multipliers. If you add the multipliers of the 5 day WMA example, the number is 15.

However, the weighted moving average takes into account the prices covered by the period of the moving average and not all the data in the life of the security. In order to solve this problem, the exponential moving average (EMA) can be used.

Looking at the diagram, we can see how the EMA reacts quicker to a change in the trend compared to the slower SMA. 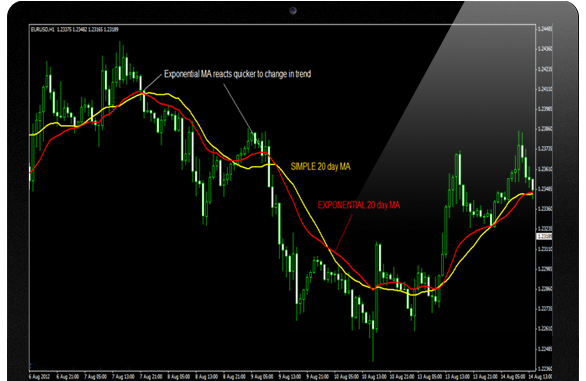 Length of the Moving Average

Do not use in a range! Moving averages work better when the market is trending. In a range this indicator is not of much use and buy or sell signals will not work effectively.

How to Trade with the Moving Average? 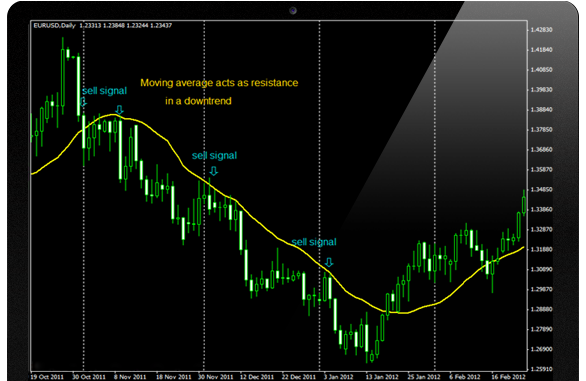 Note that the longer the period you use for the SMA, the slower it is to react to the price movement. This would create fewer whipsaws and false signals. To make a moving average smoother, you would average closing prices over a longer time period. A shorter period moving average hugs prices more closely and is more sensitive to price action.

The longer term averages work better as long as the trend remains in force. Therefore it can be more advantageous to use more than one moving average.

Buy and Sell Signals are Given 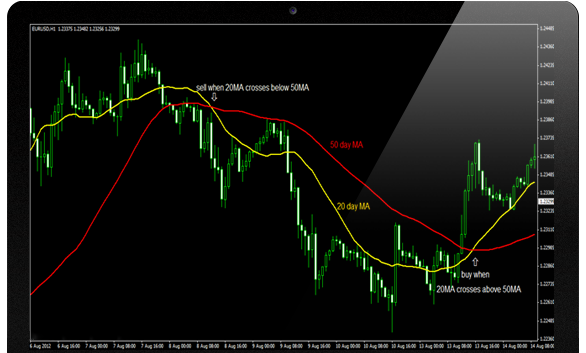 For example the 10-25-50 day moving averages can be used. Also another commonly used triple crossover system used is the 4-9-18 day moving average system. The alignment of the moving averages in an uptrend is as follows: the shorter term MA (e.g. 10 day) follows prices closely, while the 25 day follows below it, and then the 50 day is below these two.

In a downtrend, the order is reversed, so that the 10 day MA is the lowest, then the 25 day above it, followed by the 50 day on the top. When prices are in a downtrend and subsequently reverses to the upside, a buy alert occurs when the shorter-term moving average, the 10 day crosses above the 25 day and the 50 day. 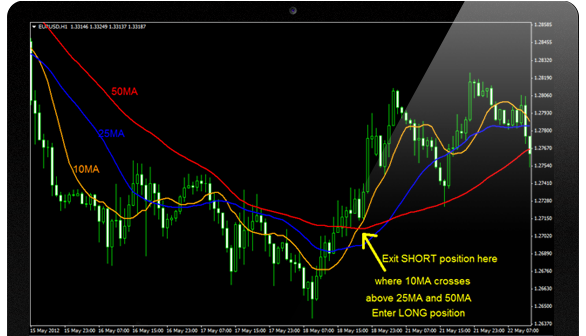