What's behind the mania in stocks?

There's something different about this booming stock market, especially when one looks at all the madness under the hood in small-cap and penny stocks. Several reasons have been floated to explain this phenomenon, from cheap money policies to massive government spending to the rise of small investors. It looks like a bubble, but the thing about bubbles is that they can last longer than anyone thinks possible.

The only game in town

The equity market has staged an epic comeback since the March 2020 apocalypse. There is a sharp disconnect between the real economy and financial markets, but there are solid reasons behind this divergence.

First, central banks have killed bonds. Policymakers have gone all-out to fight this crisis, slashing rates to zero and buying all sorts of assets. This means yields have fallen dramatically, with most government bonds now being negative-yielding once inflation is accounted for. Bonds are no longer risk-free assets, they are a return-free risk. And real interest rates are not zero, they are deeply negative.

This has tremendous implications. Bonds are the largest asset class worldwide, so when they become 'uninvestable', investors looking for returns are forced into riskier plays. If you are guaranteed to lose money buying bonds, the only alternative is equities, as commodity markets are too small. 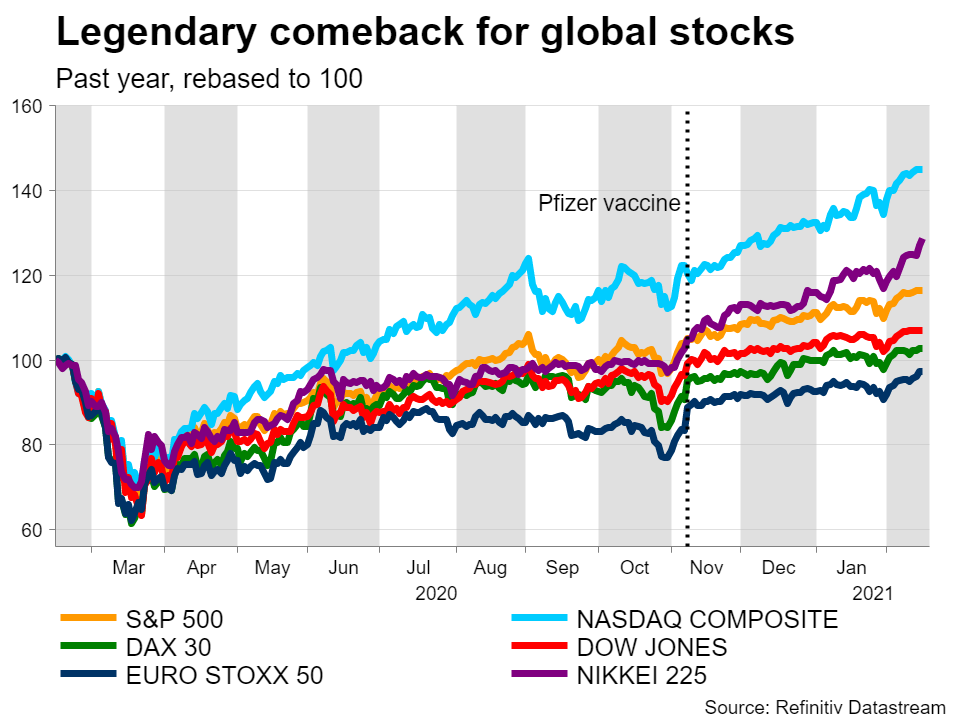 Importantly, there is no expectation this will change anytime soon. Money being cheap right now is one thing, but when the Fed says rates will stay on the floor for years even if the economy recovers, that's a completely different ball game. Never has the threat of higher interest rates been so distant.

Of course, it's not just central banks. Governments have discovered they can borrow money at negative real rates to spend on relief programs. Public debts have skyrocketed and this genie is unlikely to go back in the bottle. It turns out that when politicians spend big, it is quite popular with voters.

It doesn't happen often, but when cheap money policies meet massive government spending, that is rocket fuel for markets. The US Congress is currently working on a $1.9 trillion aid package and President Biden has promised another big package that will focus on infrastructure afterward.

Enter small investors. A combination of low trading fees from brokerages, some spare savings, and perhaps sheer boredom during the lockdowns has invited an army of retail traders to this party. Estimates suggest this group accounted for 20% of all trading volume last year. 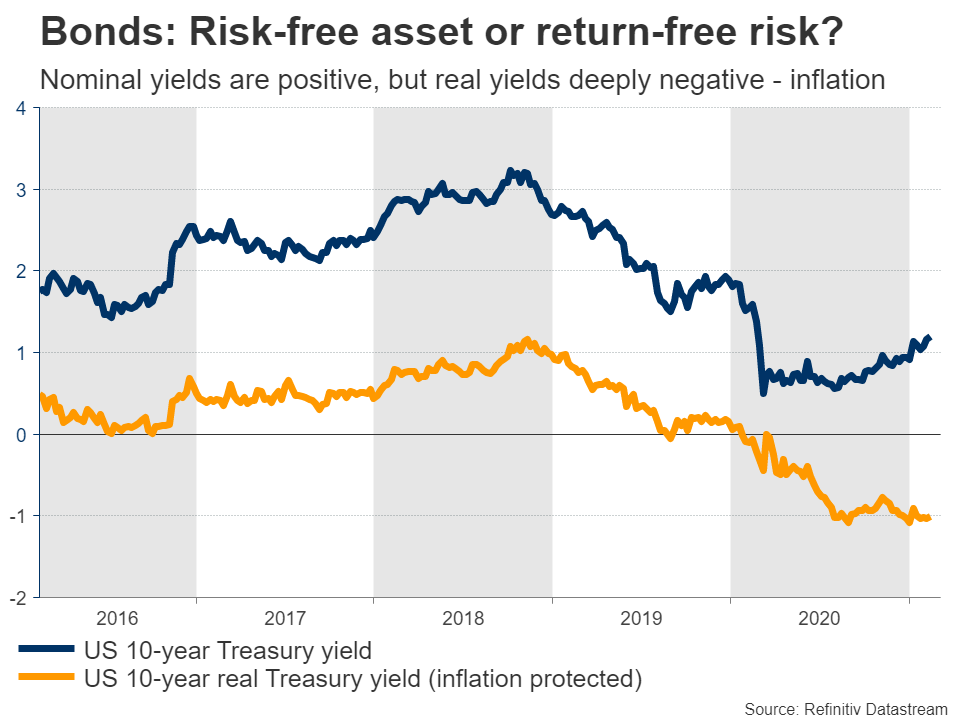 This is huge in itself, but it gets even better. This generation of day traders has discovered sophisticated ways of propelling stocks higher – through options. Options have embedded leverage, so if small investors bet a stock will rise this way, they can push the price much higher as the market makers selling those options to them are forced to hedge their risk exposure, by buying the underlying asset too.

It is essentially a feedback loop, where buying bullish options forces big dealers to buy the stock too, pushing the price higher and leading short sellers to close their positions to avoid bigger losses, adding fuel to the rally. This phenomenon is more common in smaller names, though it was also evident in Tesla's furious rally.

As a result, most valuation measures have gone through the roof. The trailing price-to-earnings (PE) ratio of the S&P 500 is now at levels previously associated with bubbles. The forward PE ratio is lower, but at 22.5x it is still very elevated. The price-to-sales ratio has exploded higher as well. 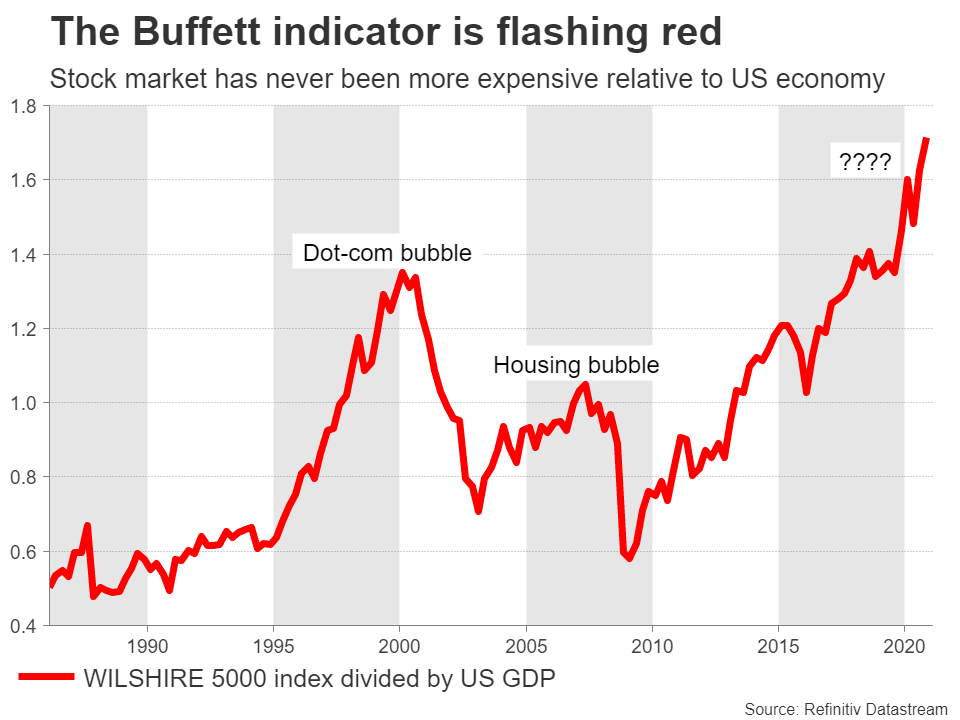 Perhaps the most telling metric though is the famous 'Buffet indicator'. This is the ratio of the entire stock market capitalization relative to the size of the US economy. It stands at record highs, far higher than any previous bubble.

But bubbles can last for a long time

In a nutshell, it seems like a bubble, but that does not mean it will pop soon. We might still be in the early stages of this mania. If the Fed is not even 'thinking about thinking about raising rates', as Chairman Powell famously said, investors have no choice but to continue dancing until the music stops.

And the music could keep playing for years. The phrase 'irrational exuberance' was first used by then-Fed Chairman Alan Greenspan back in 1996 to describe the wild gains in the market in those years. Before that bubble ultimately burst in 2000, the S&P 500 had doubled since Greenspan's comment, while the Nasdaq had more than tripled. 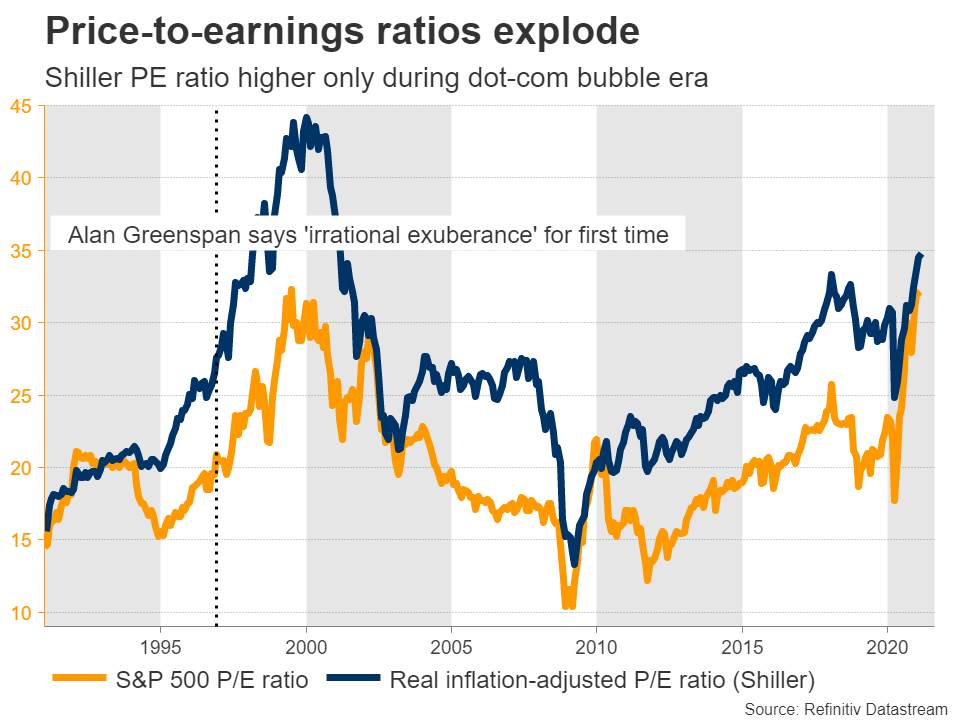 The aftermath was a catastrophe of course, but the point is that just knowing you are in a bubble doesn't mean much. They can last for longer than anyone thinks possible. Until the Fed finally decides to take the infamous punch bowl away, the party could keep raging.

That's a tough question. As we learned last year, when government support is so tremendous and central bank liquidity is infinite, not much can damage markets. Any trouble simply means more support for longer. For instance, if a new mutated virus strain is discovered that is resistant to the existing vaccines, it could spark a substantial correction, but not a crash.

Instead, the real risk might be inflation. Market-based inflation expectations have shot higher lately as investors brace for an inflationary episode, driven by consumers spending the savings they've accumulated, soaring energy prices, and supply chain disruptions. Additionally, some believe Congress might overplay its hand by spending too much. 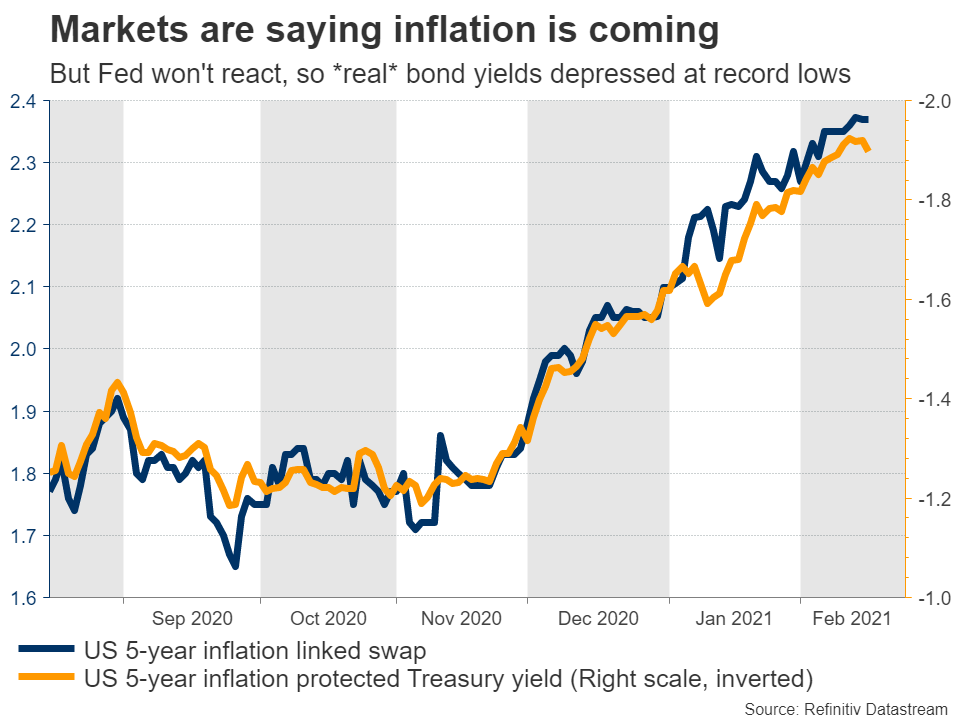 Stocks are considered a good hedge against inflation. However, this may not be the case this time, as a sustained inflation episode could raise doubts about how much longer the Fed can keep interest rates at zero. The latest Fed projections suggest no rate increases until 2024, but if this timing is brought forward to 2023 for example, alarm bells could start going off. This could become a theme later this year already.

When the music's over

Overall, this market feels like a ticking time bomb, even if the detonation is still far away. It is characterized by overvaluation and extremely speculative behavior, which are enabled by cheap money and a barrage of spending.

Unfortunately for investors, there is no alternative. Valuations could get even crazier before the day of reckoning finally arrives. As Keynes said in the 1930s: “markets can remain irrational longer than the investor can stay solvent”. 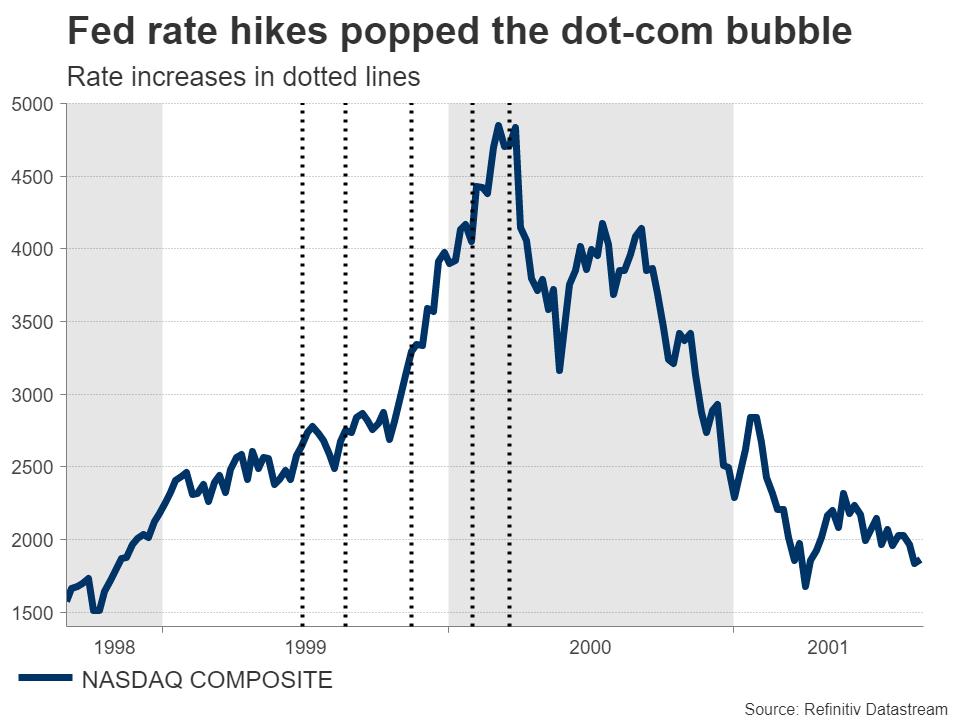 The most prudent approach in this strange environment may be to remain invested but keep a close eye on the Fed. When the ocean of liquidity starts being withdrawn, that will be a good time to reduce risk or consider an exit strategy. The hangover will be terrifying, but until then, party on.