Bank of Canada decision: Waiting it out – Forex News Preview

The BoC will wrap up its meeting at 14:00 GMT Wednesday. The domestic economy is doing well, and even though covid infections have risen lately, they remain far lower than those in other countries. This suggests the Bank is unlikely to act, especially since policymakers will want to evaluate the outcome of the US election and the evolution in local infections before deploying more stimulus. The loonie could spike slightly lower if the BoC strikes a cautious tone, but overall, the most crucial variable for the currency is how stock markets perform. Canada outperforms

The Canadian economy has recovered faster than expected in recent months, as the powerful fiscal response from the government flowed through into stronger economic data. Core inflation accelerated to reach the lower band of the BoC’s 1-3% target range in September, retail sales have rebounded sharply, and the unemployment rate fell significantly in the latest employment report. 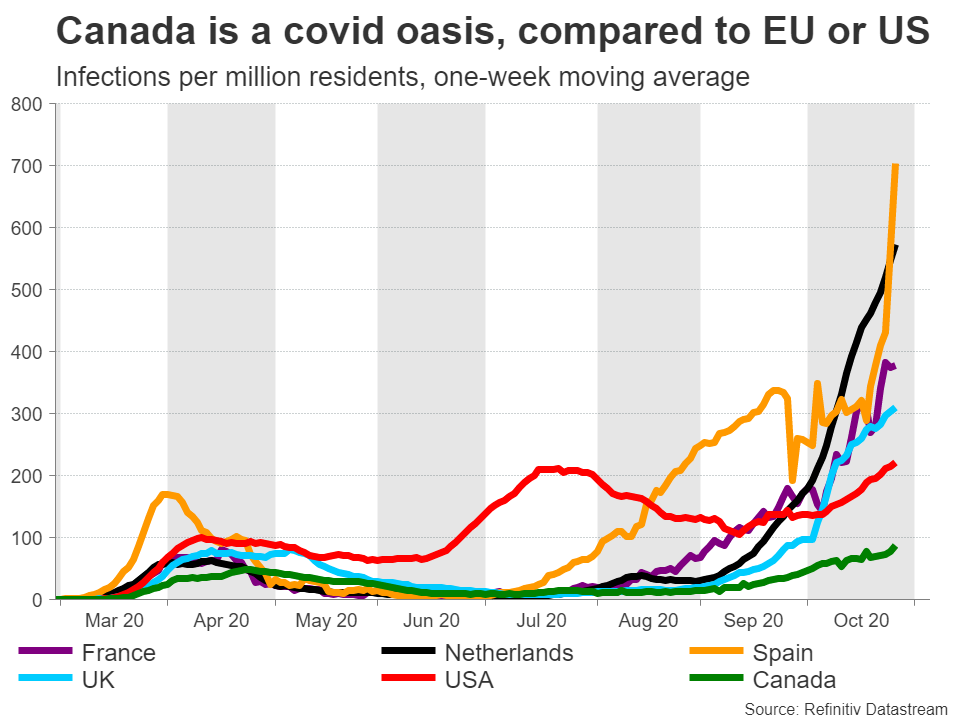 The only worrisome spot is the covid case count. Infections have soared in Canada lately too, but adjusting for population, the nation is still in a much better position than most of Europe or the US. Hence, the Canadian outbreak is still under control, though as we learned in recent weeks that can change in an instant.

No action, but perhaps a cautious tone

Considering all this, the BoC is unlikely to take any action at this meeting. Money markets agree, as overnight index swaps imply almost no chance of a rate cut over the coming year. Hence, what will drive the market reaction at this meeting is probably how Governor Macklem characterizes the outlook for the economy.

Admittedly, there is a good chance he sounds cautious about the future, because even though the economy is improving, there is still a long road to go. Not only are infections rising, but the latest business survey from the BoC itself found that investment intentions by companies remain weak, and that the recovery will likely be uneven. 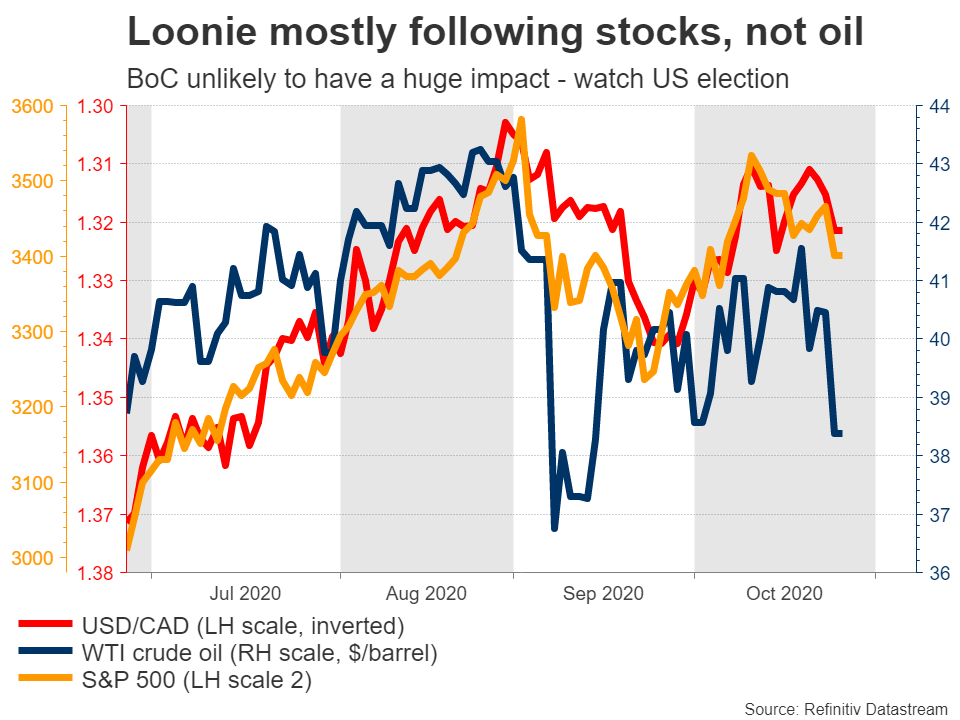 Plus, if Macklem sounds optimistic, the loonie could soar higher, which the Bank surely wants to avoid as a stronger currency can mute inflation and exports. Hence, Macklem seems more likely to maintain a relatively cautious tone, highlighting the various risks that lie ahead. If so, that would argue for a small tumble in the loonie as investors price in some expectations for rate cuts in the coming year.

Overall, the loonie cares most about stocks

Hence, how risk sentiment evolves may be the single most crucial element. This implies that the US election and the progress in stimulus talks could have a much bigger impact on the loonie than anything Canada-related, at least over the coming weeks.

Taking a technical look at dollar/loonie, in case Macklem hits a dovish note, the pair could edge higher towards the 1.3260 zone, where an upside break would turn the focus to the recent highs at 1.3420.

On the flipside, if speculation for a ‘Democratic sweep’ in the US intensifies in the coming days for example, the market could edge lower for another test of the 1.3100 handle, with a bearish break opening the door for the 10-month low of 1.2990.